A Judge Blocked the Census From Asking About Citizenship. Here's Why It Matters

A federal judge in New York has blocked the Trump Administration from adding a question about citizenship status to the 2020 Census, marking a victory for critics who have said the question is unnecessary and is intended to decrease the number of immigrants and minorities counted in the decennial survey.

The ruling is just the first in a series of cases on the issue, which has significant implications for future elections, political representation at every level and federal funding decisions for the next decade. The Trump Administration is also facing five other lawsuits over the Census question, and the battle is expected to end up at the Supreme Court.

But U.S. District Judge Jesse Furman’s decision on Tuesday was an important moment. The suit’s plaintiffs — a collection of immigrant advocacy groups, states and local officials — argued that the Trump Administration tried to add the citizenship question to intentionally dissuade immigrants from responding to the survey. The U.S. Census, which is conducted every 10 years, has not included a question about citizenship since 1950. More detailed sampling surveys have done so, but those go out to far fewer households.

Furman ruled that the way Commerce Secretary Wilbur Ross added the question was “arbitrary and capricious” and violated administrative procedures.

“He failed to consider several important aspects of the problem; alternately ignored, cherry-picked, or badly misconstrued the evidence in the record before him; acted irrationally both in light of that evidence and his own stated decisional criteria; and failed to justify significant departures from past policies and practices,” Furman wrote in his 227-page decision.

The judge also ruled that Ross’s explanation for the citizenship change — that the Justice Department said it was needed to help enforce the Voting Rights Act — was “pretextual.”

Ross initially offered voting rights enforcement as his official explanation, but documents released as part of the ongoing lawsuits revealed that he began pushing the issue on his own soon after becoming Commerce Secretary.

The Justice Department said it was disappointed in the ruling, while advocacy groups like the ACLU cheered the decision.

“This ruling is a forceful rebuke of the Trump administration’s attempt to weaponize the census for an attack on immigrant communities,” Dale Ho, director of the ACLU’s Voting Rights Project, said in a statement. “The evidence at trial, including from the government’s own witness, exposed how adding a citizenship question would wreck the once-in-a-decade count of the nation’s population. The inevitable result would have been — and the administration’s clear intent was — to strip federal resources and political representation from those needing it most.”

As this was the first ruling in the cases against the citizenship question, evidence that came out during the trial could encourage those pursuing similar lawsuits, said William H. Frey, a demographer and expert on the Census at the Brookings Institution.

“This is good news for people who want to have a Census that represents America,” Frey told TIME. “You want to make sure that all groups are represented and it helps the proper apportionment of Congress, it helps federal spending that is allocated to different groups around the country.”

If immigrants and other minorities avoid responding to the census because of a question about citizenship, experts, including the Census Bureau itself, say it would likely result in a survey that significantly undercounts those populations.

The Census provides crucial data that is used for a wide variety of decisions, including how many representatives each state sends to Congress and how much federal money different areas receive for everything from highway funds to Medicaid. The data can also affect state representation and even the Electoral College, which is based on Congressional delegations.

The private sector often relies on Census numbers as well for decisions about where to open stores or where to base factories and other employment opportunities, Frey notes.

“The Constitution says that we need to count everyone in the United States and I think that as a scientist, as a demographer, as someone who has been doing this for a long time, the research is pretty unequivocal that that’s going to not be done if the citizenship question is on there,” he said. 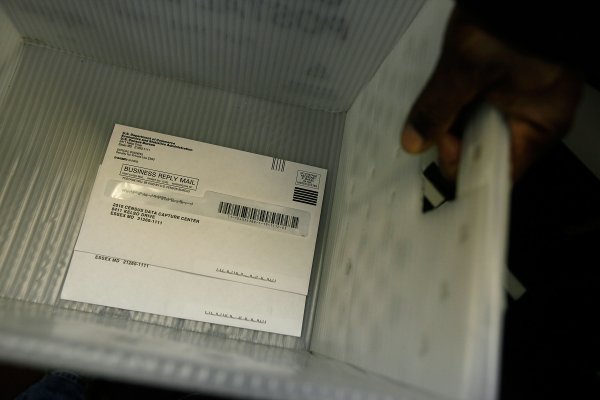 The U.S. Population Is Growing at the Slowest Rate Since 1937
Next Up: Editor's Pick