There Are 3 Ways the Shutdown Could End. They're All Unlikely Right Now

As the partial government shutdown enters its fourth week, no one seems to have any answers on how it may end – even the people driving the negotiations.

President Donald Trump remains dug in on his request for more than $5 billion for a wall along the Mexican border, while House Democrats maintain that they will not fund it. Without their support, he cannot go through the usual channels to ensure the funding becomes law.

Sen. Lindsey Graham, who has floated tentative compromises to no avail, suggested that the President temporarily re-open the government while lawmakers hash out negotiations, but the President did not like that idea. “That was a suggestion that Lindsey made but I did reject it yes. I’m not interested,” he said. “I want to get it solved. I don’t want to just delay it. I want to get it solved.”

Below are the three main ways the shutdown showdown could end – although none seem likely given the partisan gridlock that has seized the nation’s capitol.

Trump and Pelosi cut a deal on immigration

In the past, government shutdowns have rarely ended with a clear-cut victory, instead leading to some kind of compromise where each side gives something. In this case, that would be some — but perhaps not all — of the money Trump has requested for the border wall, in exchange for something like protection for people brought to the U.S. illegally as children.

A group of senators, led by Graham, discussed just such a compromise last week, but the White House rejected it. Trump announced in 2017 that he would phase out the Deferred Action for Childhood Arrivals program, which protected the so-called Dreamers, and he reportedly would like to wait until the Supreme Court rules on the phase-out before negotiating on it.

Right now, any further negotiations to actually solve the problem seem to be, quite literally, off the table. No meetings between Republicans and Democrats are scheduled for this week.

Why it’s unlikely: Trump rejected a similar compromise in 2018.

Senate Majority Leader Mitch McConnell has said he will not bring a bill to end the shutdown up for a vote unless Trump says he’ll sign it. But even if he did, it would require both Democrats and Republican support to reach the 60-vote threshold to pass the upper chamber. Trump would presumably veto the bill, meaning it would then have to get two-thirds of each chamber to override the president.

But nothing about this scenario seems likely at the moment. Not only because Congress has overridden fewer than ten percent of Presidential vetoes in U.S. history, but because McConnell has shown no inclination to bring up these bills. So far has been staying out of the fray when it comes to negotiations, maintaining that the burden is on the Democrats and the White House to reach an agreement.

Why it’s unlikely: Polls show Republicans still side with Trump on the shutdown and the wall.

In the past week, Trump has floated the idea of using declaring a national emergency and using his executive powers to subvert the legislative branch and build the border-wall unilaterally. Legal experts have said he is on shaky ground here, but it was only after Republican lawmakers pushed back on the idea that Trump seems to have backed down.

“I’m not looking to call a national emergency,” he told reporters Monday. “This is so simple we shouldn’t have to.”

Others in his party, however, are cautioning that doing so may be the best way for the President to tell his voting base he did everything in his power to try and build the border wall, even if it ends in a protracted court fight.

“I think everyone would rather a deal [with Congress],” said Brian Ballard, a Republican lobbyist and vice chairman on the Republican National Committee’s finance team. “But I don’t think a deal is possible.”

Why it’s unlikely: Trump could have done it already easily, but he hasn’t.

With reporting by Abby Vesoulis in Washington

The original version of this story misstated the length of the partial government shutdown. It is entering its fourth week, not its third. 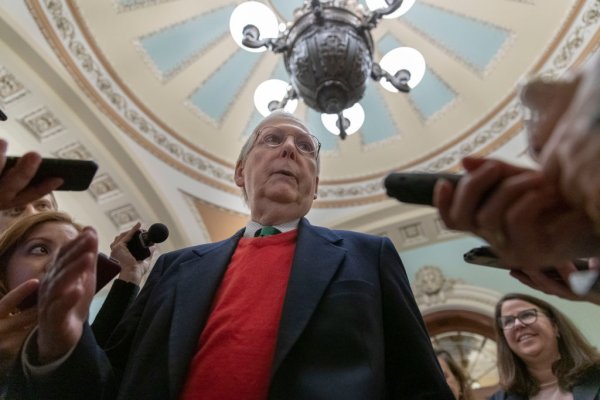 How Mitch McConnell Is Working Behind the Scenes to End the Shutdown
Next Up: Editor's Pick