In the day after Rep. Tlaib said to supporters that “we’re gonna go in and impeach the motherf—-,” referring to President Trump, the three cable news networks devoted over two and a half hours to the topic. In a similar period following the publication of Rep. Steve King’s comments questioning how the phrase ‘white supremacist’ could be offensive, those networks spent just under 30 minutes on the subject.

To study the coverage, Media Matters said that its researchers reviewed Jan. 4 transcripts on a video streaming service for the words “Rashida,” “impeach” or spelling variations of “Tlaib” (including the misspelling “Talib”) on the three cable news networks’ coverage. Media Matters searched for mentions of “Steve King” for a similar time frame through Jan. 11.

In an interview with the New York Times published Jan. 10, King is quoted as saying “White nationalist, white supremacist, Western civilization — how did that language become offensive?” Commenting on the newly-elected people of color to Congress, he added: “You could look over there and think the Democratic Party is no country for white men.”

The comments drew rebukes from Republican leaders, including Rep. Liz Cheney (R-WY) who said on Twitter that King’s comments “are abhorrent and racist and should have no place in our national discourse.”

Other cable news networks also appeared to have imbalanced coverage. According to Media Matters, CNN discussed Tlaib’s comments for almost an hour and five minutes, compared to about 15 minutes for King’s comments. MSNBC used 38 minutes on Tlaib’s cursing, and a little over 14 minutes on King’s white supremacy comments.

To Media Matters, the apparent difference in coverage “raises serious questions about just what stories cable news considers newsworthy and whether there’s a double standard in coverage of Democrats versus Republicans.” 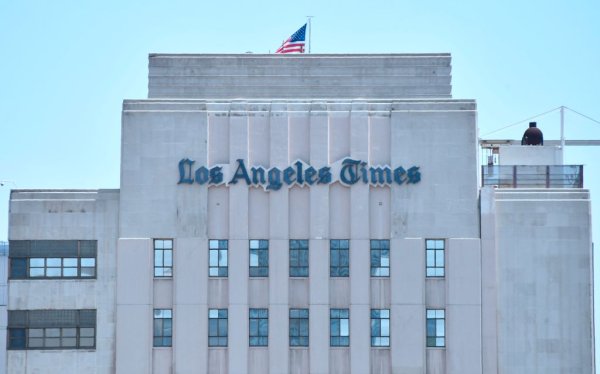 Malware Attack Disrupts Newspapers Across U.S.
Next Up: Editor's Pick