The TSA Is Closing Security Lines Because of the Shutdown

(Bloomberg) — The Transportation Security Administration plans to begin closing a handful of security checkpoints at airports around the U.S. as soon as this weekend in response to staff shortages as impacts of the three-week partial federal government shutdown begin to expand.

Miami International Airport expects to shut one of its concourses for several days starting Saturday afternoon and will move flights to other gates, according to a statement by the airport.

More than 51,000 TSA employees have been on the job without pay since Dec. 22 and missed their first paycheck on Friday. On Thursday, the agency saw a 55 percent increase in employees calling in sick, from 3.3 percent a year ago to 5.1 percent, spokesman Michael Bilello said in an email.

While impacts to travelers as a result of airport security screening has so far been minimal, airports fear it could rapidly worsen, said Christopher Bidwell, a senior vice president at the Airports Council International-North America in Washington.

“We’re very concerned that the current situation with government employees going without pay is unsustainable in the long term,” Bidwell said. “We certainly have to be mindful of the potential for cascading operational impacts.”

Bilello said on Twitter that the TSA is working with “stakeholders and industry partners to explore efforts to consolidate officers and operations.”

Stress on the system may may soon start causing flight delays, said Trish Gilbert, vice president of the National Air Traffic Controllers Association. The union, which represents more than 10,000 air-traffic controllers, filed suit in federal court in Washington on Friday, charging that it’s illegal to force them and other aviation employees to work without compensation.

Concourse G at the Miami airport will be closed after 1 p.m. Saturday through Monday and travelers will be directed to other checkpoints.

United Continental Holdings Inc. operates some flights at that concourse. “We will work to ensure we do everything we can for our customers and we do not expect any operational impact,” said Frank Benenati, a United spokesman.

TSA hasn’t heard of any other airport planning to shut an entire concourse like the one in Miami, Bilello said. It’s routine for TSA to open and close screening lanes as volume at airports rises and falls.

Airport security officers, along with air traffic controllers and employees at more than a dozen U.S. agencies and departments, have been caught in a political battle between President Donald Trump and congressional Democrats over whether to fund a border wall with Mexico.

The security screeners and controllers are among workers declared essential to security and safety and have been ordered to work without pay.

The lawsuit filed by the National Air Traffic Controllers Association union charges that Trump, the Federal Aviation Administration and other U.S. officials are violating workers’ constitutional rights by “depriving them of their hard-earned compensation without the requisite due process.”

The union is seeking a temporary restraining order to force the government to pay employees.

In some cases, the lack of pay is having a “devastating effect” on employees, the suit said. One plaintiff, Amanda Fuchs, a controller from Clermont, Florida, is a single mother who also helps care for her brother, mother and stepfather. The shutdown is hurting her ability to keep up with those responsibilities, the suit said.

So far, there is no evidence of increased absenteeism in the nation’s airport towers and radar rooms, NATCA’s Gilbert said. However, the controller staffing was already at a 30-year low and support workers have been furloughed, putting more pressure on those who remain on the job and threatening to cause flight delays, she said.

“It’s hard to predict when that will happen,” Gilbert said. “I will tell you that morale is not good in our facilities and among our workforce.”

The FAA declined to comment Friday on the controllers’ lawsuit. The agency is focusing on ensuring its resources are devoted to ensure that the system remains safe, it said in a statement.

In similar shutdowns Congress and the White House have always agreed to pay back wages to government employees, though some contractors haven’t been paid in arrears. The House on Friday passed legislation that would give federal workers back pay. The Senate already passed the measure, which now goes to Trump for his signature.

Unlike the controllers, TSA officers and other workers deemed essential, most federal employees are furloughed and haven’t been working.

The TSA has vowed to take steps to ensure that screening of people and bags at airports isn’t compromised by the shutdown.

“As the current lapse in funding persists, TSA officers continue to perform with the utmost professionalism and dedication,” Bilello said. “We thank TSA officers for their resilience and diligence, and we thank industry and the public for their continued acts of kindness and support.”

While the percentage of officers calling in sick is up substantially, the overall number of missing screeners remains small and airport operations have had minimal disruptions, according to the agency.

TSA officers screened 1.96 million passengers on Thursday and 99.9 percent waited in line less than 30 minutes, according to the agency. 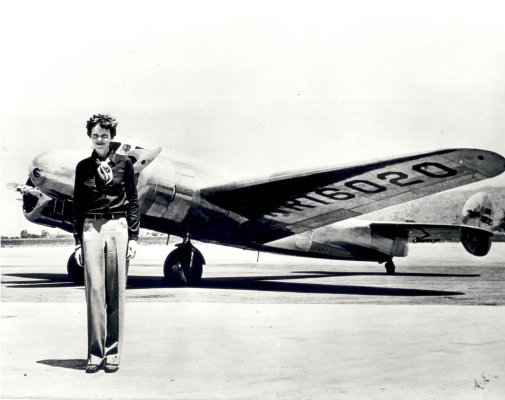 Amelia Earhart Was Declared Dead 80 Years Ago. Here's What to Know About What Actually Happened to Her
Next Up: Editor's Pick