President Trump Thinks the Shutdown Will Give Him His Wall. Here's How Presidents Have Fared in Past Shutdowns

The government shutdown over President Donald Trump’s border wall became the longest in U.S. history on Saturday, as it stretched into its 22nd day.

As Trump refuses to budge on his demands for wall funding, policy experts warn that past shutdowns have rarely resulted in a clear victory and often create more problems than they solve, inconveniencing the public, harming federal employees and producing little long-term change.

“Shutdowns don’t work. I mean, they work to the extent that cutting off your arm helps you lose weight if you’re on a diet,” says Linda Bilmes, a public policy professor at Harvard’s Kennedy School and a leading expert on budgetary issues. “Shutdowns create far more problems than they solve for both sides, regardless of who is the short-term winner.”

But she pointed to a few instances when, at least in the short-term, past presidents got what they wanted out of a shutdown.

There have been 20 previous federal funding gaps in the past four decades, though they didn’t become shutdowns as we know them today until 1980 and 1981, when U.S. Attorney General Benjamin Civiletti issued opinions stating that if there’s a lapse in government funding, there must be a lapse in government operations as well.

In 1978, President Jimmy Carter vetoed a public works bill and defense spending bill over provisions he considered to be wasteful. The shutdown lasted 17 days, and Congress ultimately passed legislation that excluded the items Carter disagreed with, such as a nuclear-powered aircraft carrier.

In 1984, President Ronald Reagan emerged a clear winner from a government shutdown that lasted only three days with a half-day furlough. House Democrats wanted a bill to fund water projects and to reverse a Supreme Court ruling that weakened civil rights requirements for universities — both of which were opposed by Reagan, who wanted to pass a crime bill. In order to end the shutdown, Democrats, relenting on the water projects and civil rights bill, agreed to pass his crime bill and added funding for the Contras guerrillas in Nicaragua.

In 1981, Reagan, who had a record eight shutdowns during his presidency, was less lucky. He shut down the government for two days by vetoing a spending proposal because it did not contain at least half of the $8.4 billion in spending cuts he wanted. Congress passed a stopgap bill after more than 240,000 employees were furloughed for one day and ultimately passed a bill containing $4 billion in spending cuts — a partial victory for Reagan.

In 1990, President George H.W. Bush forced a government shutdown as he pledged to veto any resolution that did not include a plan to reduce the deficit. The shutdown lasted three days before the House and Senate passed a joint budget resolution that included a plan for reducing the deficit, and Bush signed it into law.

“But it didn’t work either in the short term or the long term,” Bilmes says. “It didn’t work politically because Bush raised taxes and lost his presidency. And it didn’t work in the long-term because the deficit increased anyway.”

Before this year, the longest shutdown lasted for 21 days under President Bill Clinton in 1995 — when an extended shutdown became a political weapon, says Roy Meyers, a political science professor at the University of Maryland, Baltimore County, who has studied the history of shutdowns.

Technically, that shutdown and another lengthy shutdown in 2013 ended with presidents getting what they wanted. Clinton got the Republican-controlled Congress to pass legislation to keep the government open, even though they still disagreed about whether his seven-year plan would actually balance the budget. And President Barack Obama avoided a spending bill that would have defunded or delayed the implementation of the Affordable Care Act.

But both shutdowns still resulted in hundreds of thousands of federal employees being furloughed and cost the government billions.

“President Clinton and Obama did gain some short-term political advantage from it,” Meyers says. “But I’m sure that both of them would’ve preferred to have reached a compromise without going through a shutdown.”

“It’s hard for me to identify any shutdowns that worked well for a president,” he says.

Presidents and lawmakers who have tried to use shutdowns to force progress on broader and more controversial policy issues have historically run into challenges, says Bilmes. There were several shutdowns under the Carter Administration over the issue of abortion, for example, that ended without a clear win for either side.

“They kept resulting in further disagreements and further shutdowns. They did not solve the disagreements, and I think it’s a folly to think that a very significant social issue that touches on important factors for many people in society is going to be resolved through a budget shutdown,” Bilmes says, calling it a “crude tool” for negotiations. “The shutdown is very poorly suited to help get society to agree.”

Trump’s demand for $5.7 billion to build a wall on the Southern border — a proposal central to Trump’s controversial immigration agenda and complex debates about who is welcome in America — could fall into that category.

“So often this is not really about policy, and it’s more about politics,” says John Wilkerson, director of the Center for American Politics and Public Policy at the University of Washington, who studied the 2013 shutdown. “I would say that’s what’s happening with the wall. It’s a pretty minor issue from a budgetary standpoint, but it’s hugely symbolic for both parties, and that’s why they’re fighting over it.” 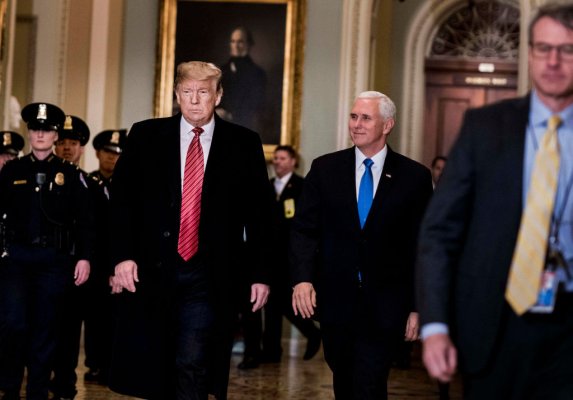 Trump Has a Long History of Storming Out of Meetings
Next Up: Editor's Pick