A molasses tank collapsed and caused widespread damage in Boston's North End in January 1919. The incident is commonly referred to as the Great Molasses Flood.
Boston Globe via Getty Images
By Ray Cavanaugh

The molasses tank operated by the Purity Distilling Company in Boston’s North End had been leaking from the start. Employees had expressed concern that the giant tank, which measured 50 feet in height and had a diameter of 90 feet, was a safety hazard. Its owners even painted the tank the color of molasses in an effort to mask the constant leaks.

Less concerned were the neighborhood children, who could fill their cans with free molasses from the drippings. But around 12:30 pm on Jan. 15, 1919, following a quick succession of unnaturally loud ominous sounds, the North End in a span of seconds received more of the syrup than anyone could collect in a lifetime. And it was anything but free.

The distillery tank had exploded and released its contents in a spectacular wave some 25 feet in height and 165 feet wide. Despite the “slow as molasses” cliché, a tsunami of the thick syrup crashed through the neighborhood at a reported 35 mph. Molasses may not seem to be the most dangerous of substances, but when 2.3 million gallons are unleashed at once, it can demolish buildings, tear apart train tracks, rip a fire station from its foundation, and drown or suffocate dogs, horses and people.

This bizarre and terrifying event, known as the Great Molasses Flood, claimed 21 lives, with victims ranging in age from 10 to 78. Some 150 persons were injured, and the damage to property — much of which had cascaded into nearby Boston Harbor — amounted to about $100 million in today’s money.

The ensuing rescue effort lasted four days, as firemen and police, among others, struggled to contend with quicksand-like conditions and attend to persons who were not only maimed but literally stuck in their horrendous predicament. Early newspaper articles misreported the number of dead because the often-impenetrable mess delayed an accurate fatality count.

In the aftermath of such chaos came an investigation, which determined that the man who supervised the distillery tank’s construction not only lacked technical training, but also was unable to read blueprints. Furthermore, no legitimate engineers or architects had been commissioned to assess the structure.

But the U.S. Industrial Alcohol (USIA) corporation, which owned the Purity Distilling Company that operated the molasses tank, claimed that the explosion was not the result of substandard construction but was instead an act of sabotage perpetrated by anarchists.

In theory, the claim was plausible, as anarchists and their dynamiting tactics were common during that time. In fact, the Boston area had experienced 40 explosive incidents in the year leading up to the Molasses Flood. Moreover, anarchists had bombed USIA facilities in New York several years before, and one employee reported having received a bomb threat against the tank in Boston.

However, the ensuing court case, which lasted more than five years, decided that no act of sabotage had taken place and that structural failure was the cause of the explosion. Two days before the explosion, the temperature was a mere 2° F. But on Jan. 15, the temperature had climbed to about 40°, increasing pressure within the tank. Additionally, a recent delivery of warm molasses was mixing with the cooler molasses that had been inside the tank for weeks. Such a mix of significantly differing temperatures produced gas and added to the air pressure within the tank, which hadn’t been able to take it.

Because of the court’s ruling, the USIA was compelled to pay restitution amounting to about $15 million in today’s money.

Police, firemen, Red Cross workers, civilian volunteers and cadets from the USS Nantucket training ship berthed nearby rushed to the scene on Jan. 15, 1919, after a giant tank in the North End of Boston collapsed, sending a wave of an estimated 2.3 million gallons of molasses through the streets.
Boston Globe via Getty Images

Although this penalty was relatively moderate given the extent of death and destruction, it still carried the message that the legal system could hold businesses culpable for unsafe structures. In the words of architect William J. Hirsch Jr., author of Designing Your Perfect House: Lessons from an Architect, put it, “Accountability in construction was born.”

A sign of such accountability was the Boston Building Department’s requirement that any architect or engineer must include a signature along with all relevant calculations on building plans. As this requirement became standard practice nationwide, America’s freewheeling days of unregulated large-scale construction and do-it-yourself engineering came to an end.

Before long, all U.S. states had also instituted laws requiring engineers to have professional certification — something that the “engineer” of the giant North End tank had most certainly lacked. Additionally, in order for a municipality or state to grant a building permit, the plans for any large structure needed to bear the seal of a registered engineer.

Stephen Puleo, author of Dark Tide: The Great Boston Molasses Flood of 1919, views the Molasses Flood as a pivotal event that did for U.S. construction standards what the Cocoanut Grove fire did for fire codes.

Though not quite as impactful as the enhanced safety regulations, a syrupy aroma was purported to have lingered in Boston’s North End for decades. It would resurface on hot days, serving as an eerily sweet reminder of what can happen when amateurs undertake jobs that ought to be left to professionals. 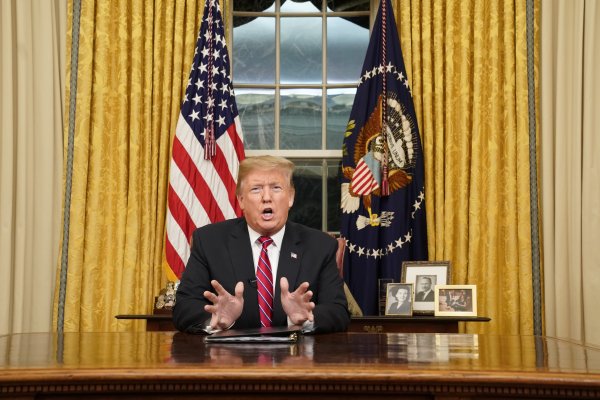 President Trump Thinks the Shutdown Will Give Him His Wall. Here's How Presidents Have Fared in Past Shutdowns
Next Up: Editor's Pick