U.S. President Donald Trump speaks to members of the media as Sen. John Barrasso and Vice President Mike Pence listen at the U.S. Capitol after the weekly Republican Senate policy luncheon Jan. 9, 2019 in Washington, DC.
Alex Wong—Getty Images
Ideas
By Faiza Patel and Raya Koreh
Patel is co-director of the Brennan Center’s Liberty and National Security Program; Koreh is a Research and Program Associate in the program.

In the first Oval Office address of his term, President Donald Trump stayed true to form, peppering his remarks with a string of falsehoods and misleading figures to create the impression of a crisis on the southern border. Presidents spinning information to suit their own purposes isn’t new, but the Trump Administration has taken this kind of manipulation to new heights — in some ways the public may not have fully realized.

The President has repeatedly used faulty data to invent national security justifications for flawed policy, including the Muslim Ban. In compliance with the President’s March 2017 executive order halting travel from six majority-Muslim countries, the Departments of Justice (DOJ) and Homeland Security (DHS) issued a report, rife with inaccuracies and methodological flaws, to create evidence justifying the ban by framing foreign-born people — including American citizens — as a “serious and persistent terror threat.”

But presidents, with all their power, can’t just make up facts. That’s why last year, the Brennan Center, Protect Democracy and other groups filed a joint petition under the Information Quality Act, which requires all federal agencies to adhere to certain standards of “quality, objectivity, utility, and integrity” when providing information to the public.

We argued that the report artificially inflated the threat of foreign-born terrorism, in part by excluding all instances of domestic terrorism from its analysis. The report also cherry-picked eight unrepresentative cases of Muslim men as “illustrative examples” of the 402 foreign-born individuals convicted of international terrorism-related charges.

We requested that DOJ and DHS retract or correct the report, which had been trumpeted by the president and then-attorney general Jeff Sessions. In the DOJ’s response to our appeal last month, they actually admitted that the report was misleading, recognized the need to provide underlying data, and acknowledged that its eight “illustrative examples” were not “representative of all cases” and could cause readers “to question [the report’s] objectivity.” While it is encouraging that the DOJ took the rare step of acknowledging substantial mistakes in an official pronouncement, its refusal to correct the mistake means that a misleading report remains publicly available and serves as an official endorsement of the Administration’s anti-immigrant, anti-Muslim narrative.

Now, we see the same fast and loose attitude with the facts when discussing the southern border.

To support the President’s demand for a border wall, his administration has misrepresented the threat of terrorists crossing the U.S.-Mexico border. Both Vice President Mike Pence and Press Secretary Sarah Huckabee Sanders have suggested that Customs and Border Protection (CBP) stopped nearly 4,000 terrorists at the border last year. In fact, CBP reported just six “known or suspected terrorists” encountered at the border, while 3,755 were stopped at all ports of entry, mainly airports. And “known or suspected terrorists” are not necessarily linked to terrorism, but merely people whose names match the federal terrorist watchlist. As the former head of the National Counterterrorism Center recently wrote, “it should not be assumed that every individual who was denied the opportunity to enter the US because of a potential terrorism link was in fact a would-be terrorist intent on doing us harm.” Indeed, the watchlists themselves are notoriously bloated.

As the Administration spins falsehoods, it deliberately misleads the American public and tries to convince citizens of the underlying false assumptions guiding those policies: that Muslims, foreigners and immigrants are threats. Those assumptions and the harmful narratives they support will remain, even after the Administration, at least for now, backs away from its talking points. 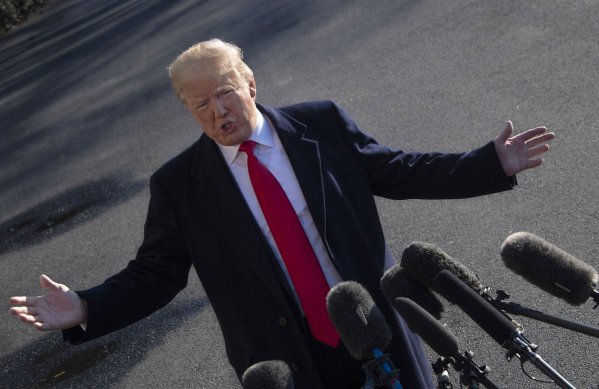 Trump Just Declared an Emergency at the Border. The U.S. Has Been in a Constant State of Emergency Since 1979
Next Up: Editor's Pick