Trump Campaigned on Mexico Paying for the Wall. Now He Says He 'Obviously' Didn't Mean It

When he launched his campaign, Donald Trump argued that he would force Mexico to pay for a border wall. Now he says he “obviously” didn’t mean it.

“I would build a great wall, and nobody builds walls better than me, believe me, and I’ll build them very inexpensively, I will build a great, great wall on our southern border. And I will have Mexico pay for that wall,” Trump said in his June 16, 2015 speech at Trump Tower. “Mark my words.”

Like many of the claims in that speech, Trump did not offer specifics. But as the campaign went on, he said he would find the money by reducing the trade deficit (that wouldn’t really work), convincing Mexico to pay with clever deal-making, forcing it to pay by blocking wire transfers and visas, increasing visa fees on Mexican citizens or building the wall first and convincing Mexico to reimburse the U.S.

In 2016, Trump even said specifically that Mexico would be compelled to give the U.S. a “one-time payment” of $5 to 10 billion for the wall, both in a memo sent to reporters and in his campaign platform.

But as he prepared to fly to the southern border on Thursday, Trump changed his tune, claiming, falsely, that he never said that Mexico would pay for the border wall and that he never meant that the country would literally hand the U.S. money for the wall.

Again, Trump did say Mexico would pay for the wall, and he did say that it would hand the U.S. money for it.

Trump’s latest comment about Mexico paying for the wall came just hours after White House strategic communications director Mercedes Schlapp said in a CNN interview that U.S. taxpayers will foot the bill for the wall.

“Yes. And you know what else taxpayers are paying for? The financial burden of this illegal immigration,” Schlapp said Wednesday in response to a question about whether Americans were paying for the wall.

Trump’s statement also comes amid a partial government shutdown designed to coerce House Democrats into voting for $5.7 billion for a wall or “steel barrier” on the southern border.

As president, Trump has argued that Mexico will pay for the wall indirectly through the U.S. Mexico Canada Agreement, which has not been ratified. However, experts say that the new deal doesn’t have any provisions to use tariff funds to build a wall and that Mexico would never agree to the treaty if it did.

“That’s not the way trade agreements work,” Welles Orr, who worked on the original NAFTA agreement as the Assistant U.S. Trade Representative for Congressional Affairs under George H.W. Bush, told TIME. “Tariffs that are collected by the U.S. Treasury would fund the U.S. Treasury.”

The claim that Mexico would pay for the wall indirectly is at odds with the Trump campaign’s most specific descriptions of how it would work.

In a two-page memo released to the Washington Post and other outlets on March 31, 2016, Trump presented a detailed plan on how to “compel Mexico to pay for the wall.” This plan would include including implementing new trade tariffs, cancelling visas and increasing visa fees.

The memo said the first step would be to block Mexican nationals who are in the U.S., legally and illegally, from wiring money back to Mexico. Trump wrote that this would prevent about $24 billion from flowing into Mexico.

“It’s an easy decision for Mexico. Make a one-time payment of $5 – $10 billion to ensure that $24 billion continues to flow into their country year after year,” the memo said.

Trump’s campaign platform also said that the U.S. would take multiple steps to force Mexico to pay for the wall. Besides impounding remittances, the platform said that as president, he would would also increase fees for visas and border crossing cards, as well as fees at border entries.

“We will not be taken advantage of anymore,” the platform concluded.

Trump had also previously suggested other ways that Mexico could pay for the wall. In an April 2015 tweet, Trump wrote that the U.S. deduct the cost of the wall “from Mexican foreign aid.” 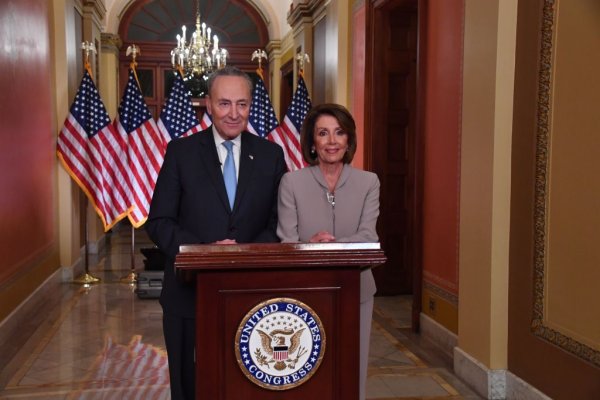 Pelosi and Schumer Awkwardly Share Podium to Rebut Trump
Next Up: Editor's Pick