Frontier are the only carrier that allows passengers to tip flight attendants.
Portland Press Herald—Press Herald via Getty Images
By George Steer

Frontier Airlines new policy on tipping flight attendants is drawing criticism from the union the represents them – fearful the budget carrier’s practice is an attempt to keep wages low and will encourage passengers to treat the cabin crew like in-flight waiters.

The Denver-based airline has been allowing its flight attendants to ask for tips for three years, but until Jan. 1, all the money collected was pooled. Frontier is the only U.S. carrier that gives passengers the option to tip, but the Association of Flight Attendants (AFA), which represents 50,000 employees at 20 airlines, is not happy with the policy.

“Flight Attendants are certified for our safety, health, and security work. Safety is not variable and therefore base compensation for a safety job cannot be variable,” AFA President Sara Nelson said in a statement to the press.

What the flight attendants union really wants is better pay. The union believes Frontier’s new tipping rules were designed to undermine the collective bargaining power as members push for changes to their contracts. Frontier flight attendants have been engaged in a lengthy battle for higher pay, and have picketed at Frontier hub airports in recent months.

“Over AFA objections when the function went onboard nearly three years ago, Management moved forward with a tipping option for passengers it hoped would dissuade Flight Attendants from standing together for a fair contract – and in an effort to shift additional costs to passengers. The tactic failed as Flight Attendants recently voted 99% to authorize a strike and back up AFA contract demands,” Nelson said.

“Regardless of the tip issue, Frontier Airlines needs to step up and pay aviation’s first responders a wage that recognizes their critical safety role onboard,” she continued.

Jonathan Freed, a Frontier spokesperson, told the Chicago Tribune the changes to its tipping policy were in the flight attendant’s interests: “We appreciate the great work of our flight attendants and know that our customers do as well, so [the payment system] gives passengers the option to tip,” he said. 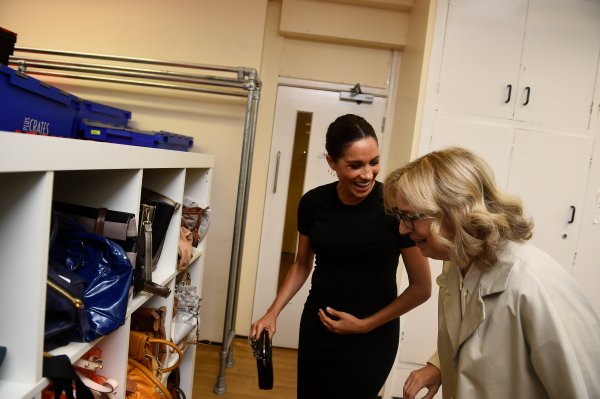 The Queen Hands Over 2 Royal Duties to Meghan Markle
Next Up: Editor's Pick