‘On a Spiritual Level, We Are All Minorities.’ Chigozie Obioma on Fate and His New Epic

Without meaning to, Chigozie Obioma fell in love with tragedies. As a child in Akure, Nigeria, he devoured Greek myths at the library; plucked Shakespeare plays from his father’s shelves; and absorbed cautionary folktales from the southeastern Igbo tribe, passed down by his mother. If there was a common thread, it was an obsession with fate–often the distinctly gloomy kind. “I must have internalized that,” he tells TIME over the phone from Lagos, where he is visiting family. “I’m always trying to figure out: Why do bad things happen to you when you don’t seem to deserve it?”

It’s a question that haunts the protagonist of Obioma’s new novel, An Orchestra of Minorities. Chinonso, a poultry farmer in Umuahia, Nigeria, is desperate to impress his fiancée Ndali’s wealthy family. When an old school friend offers to help him secure education and employment in Europe, he sells everything he owns, only to discover he has fallen victim to a painfully obvious con. He finds himself penniless and stranded in North Cyprus–a nominal state outside of the E.U., recognized only by Turkey–with few opportunities.

When Obioma, now 33, published his 2015 debut The Fishermen, which was short-listed for the Man Booker Prize, at least one critic compared him to Chinua Achebe, the godfather of Nigerian literature. His follow-up validates the comparison. The Odyssean Orchestra affirms its author’s place among a raft of literary stars–Chimamanda Ngozi Adichie, Abubakar Adam Ibrahim and others–drawing the eyes of international critics to Africa’s most populous country.

An Orchestra of Minorities Chigozie Obioma

Obioma moved to the U.S. in 2012 and now teaches literature and writing at the University of Nebraska–Lincoln, an institution vastly different from those he attended: first a strict religious university in Nigeria that favored corporal punishment, and later a college in North Cyprus, where he would meet Jay, the inspiration for Orchestra’s ill-fated protagonist. A fellow Nigerian student, Jay was lured to the island by fraudsters who promised riches and prestige. He realized his mistake as soon as he arrived. “Devastation is an understatement for what he felt. He was broken,” Obioma says. Just a few days later, Jay died a tragic death.

His classmate’s misfortune inspired the beginning of Chinonso’s story, but it took Obioma almost a decade to fine-tune it, building Chinonso’s life events into a mystical epic. The novel is narrated by his chi–a spiritual guide that, according to Igbo cosmology, watches over human beings and negotiates for them before the gods. As the spirit speaks to defend Chinonso for an unspecified crime, the reader is sent on a kaleidoscopic journey through both early-2000s Nigeria and the Igbo universe, discovering the lives of the chi’s previous hosts, from a man taken to Virginia as a slave centuries earlier to the protagonist’s own uncle.

Obioma wanted to write a book that unpacks the Igbo worldview, “in the way that Paradise Lost does for Christianity,” he says. Few prominent writers have explored the chi, apart from Achebe, who discusses its impact on the fictional Umofia clan in his 1958 classic Things Fall Apart. Obioma hopes An Orchestra of Minorities might spark a wider discussion about aspects of old African cultures that have been sidelined by European and American influence. “People my dad’s generation downward are not really in touch with that heritage,” he says. “After colonialism, [Nigerians] really became a Western society.”

Obioma, ever fascinated by destiny, says the Igbo concept of fate is complicated. It blends the free will of humans with divine plans they can’t control. “We’re like Chinonso’s chickens: when a hawk carries one of our children off, all we can do is take it,” Obioma says. “No matter how privileged you think you are, on a spiritual level, we are all minorities–small things.” 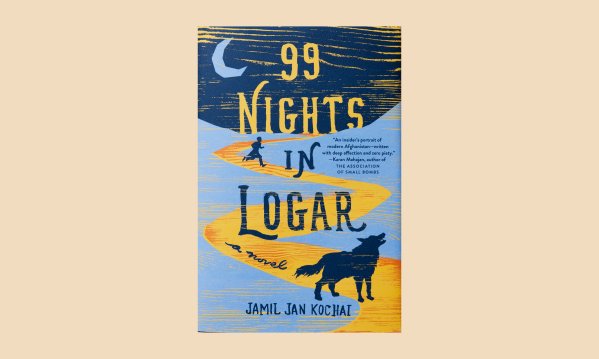 Crossing the Afghan Wilderness in 99 Nights in Logar
Next Up: Editor's Pick