As of now, Francoise Bettencourt Meyers, the granddaughter of the founder of cosmetics manufacturer L’Oreal SA, is the richest woman in the world, with a net worth of $45.6 billion, according to the Bloomberg Billionaires Index, a ranking of the world’s 500 richest people.

Neither the Bezoses nor Amazon have commented on the likely division of the couple’s assets, including a 16 percent stake in the company. But without an agreement stipulating otherwise, their wealth would almost certainly be divided equally, according to Karin Lundell, a partner at law firm Rower LLC in New York.

With $137.2 billion, Jeff is the world’s richest person, according to the Bloomberg Billionaires Index; an even split would make MacKenzie, an author, the richest woman with about $69 billion. But even if she receives as little as 1 percent of the fortune, she’d still join the three-comma club.

Most of the 66 women on the Bloomberg index came into their wealth through death or divorce. There are only six self-made women on the list, compared with 313 self-made men.

The Bezoses announced their breakup Wednesday in a tweet signed by both spouses. 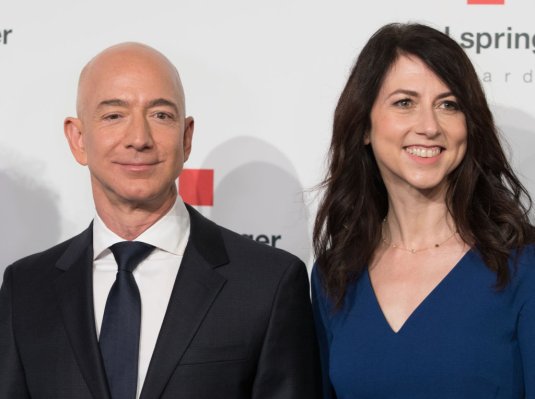 Jeff Bezos and Wife Announce They're Divorcing
Next Up: Editor's Pick