Jimmy Kimmel has some advice for President Trump in his attempt to move forward his plan for a border wall: you’re going to have to make the threat much scarier than just talking about illegal immigration.

“He does want us to believe there’s a crisis at the border, besides the one he created. He desperately wants us to be worried about the border,” Kimmel explained on his show on Tuesday night, following up the president’s evening address from the Oval Office to the nation, which was controversially broadcast on most major news channels. But, Kimmel joked, he thinks the president is going about drumming up support the wrong way. Instead, you have to “get people panicked enough to waste $5 billion” on the wall plan.

“People sneaking over the border don’t scare us,” Kimmel said. “If you really want to come up with a fake border crisis, make it a scary border crisis. Go on TV and don’t say there are illegal immigrants, say there is an army of chupacabras crawling in from Tijuana. Tell everyone they’ve get red eyes, they’ve got sharp claws, and if we don’t stop them they’ll eat our children and our Instagram.” (Chupacabras are legendary creatures with Latin American origins and vampiric tendencies.)

But until our fear reaches chupacabra levels, it looks like Trump’s battle to get the funding he desires remains uphill. 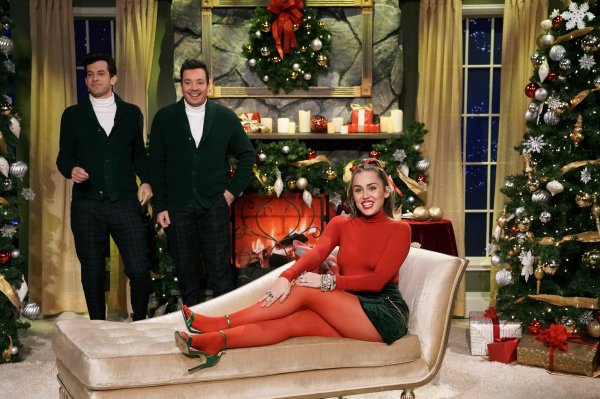 Miley Cyrus Has Some Feminist Revisions for "Santa Baby"
Next Up: Editor's Pick