While Clemson claimed a large victory over Alabama for the 2019 National Championship game on Monday night, it was Lil Wayne who commanded the attention during the event’s halftime show when he appeared on stage alongside rock band Imagine Dragons in an outrageously outlandish outfit.

Weezy’s ensemble was part Elton John, part Hamburglar, and all kinds of crazy. The rapper donned a wildly patterned, $9,300 floor-length faux fur coat from Gucci, oversized bedazzled sunglasses, a brightly airbrushed T-shirt, vinyl leather pants, over-the-knee fur-trimmed puffer boats, fingerless gloves, a striped scarf, and to top it all off, a wide-brimmed hat to cover his red and pink dreadlocks.

It was a fashion statement not soon to be forgotten and as might be expected, the Internet had plenty of feelings about tha Carter’s eclectic look for the night and wasted no time in taking to social media to sound off as self-appointed fashion police on the matter.

One viewer thought that Weezy was paying tribute to two musical and fashion icons at once.

While this fan thought Wayne’s outfit looked like something else entirely.

Some saw a resemblance to McDonald’s Hamburglar.

While others found his footwear twin. 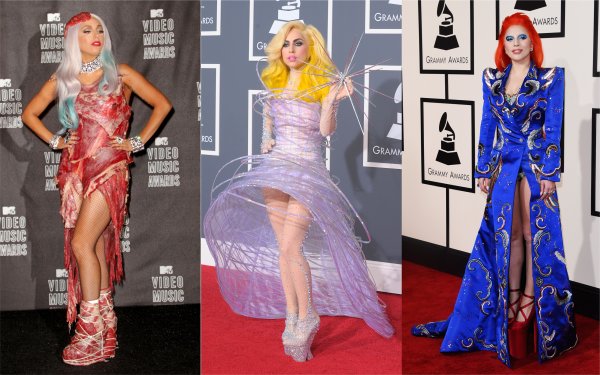 17 Times Lady Gaga's Red Carpet Style Was Out of This World
Next Up: Editor's Pick