A Venezuelan Supreme Court Judge Has Fled to the U.S. to Protest President Maduro's Rule

A former Venezuelan Supreme Court justice has fled to the U.S. and denounced the results of an election last year that will keep President Nicolas Maduro in power.

Judge Christian Zerpa’s renunciation of the Venezuelan government comes as Maduro prepares to be sworn in to a second six-year term Thursday, Agence France-Presse reports.

Zerpa also reportedly told a Miami-based broadcaster in an interview Sunday that he is prepared to cooperate with U.S. prosecutors investigating corruption and human rights violations in the South American country.

“I’ve decided to leave Venezuela to disavow the government of Nicolas Maduro,” Zerpa said in the interview with EVTV, according to Reuters. “I believe [Maduro] does not deserve a second chance because the election he supposedly won was not free and competitive.”

Venezuela’s Supreme Court confirmed that Zerpa had left Venezuela, and said that he is currently under investigation for allegedly sexually harassing women in his office.

News of Zerpa’s departure came a day after members of Venezuela’s opposition-controlled but powerless National Assembly were sworn into office. Its new president, Juan Guaido, questioned the legitimacy of Maduro’s incoming administration, while other lawmakers have called for a transitional government and new elections.

In a statement, U.S. State Department spokesperson Robert Palladino called the Assembly “the only legitimate and last remaining democratically elected institution that truly represents the will of the Venezuelan people.”

Maduro won Venezuela’s May 2018 election, which was called by the regime-backed Constituent Assembly, a new super-body intended to rewrite the country’s constitution. Most leading opposition figures boycotted the poll or were disqualified from contesting it, and a consortium of regional countries warned was ‘illegitimate and lacking in credibility.”

On Jan. 4, the Lima Group, a consortium of 12 Latin American countries, as well as Canada urged Maduro not to take office this week. Venezuela charged the group with “encouraging a coup d’etat” backed by Washington, AFP reports.

Maduro has become increasingly unpopular as a spiraling economic crisis and hyperinflation is driving desperate Venezuelans to emigrate. Last year, Caracas was roiled by months of violent protests in opposition to the Constituent Assembly, and in September, the U.S. imposed sanctions on several members of Maduro’s “inner circle.” 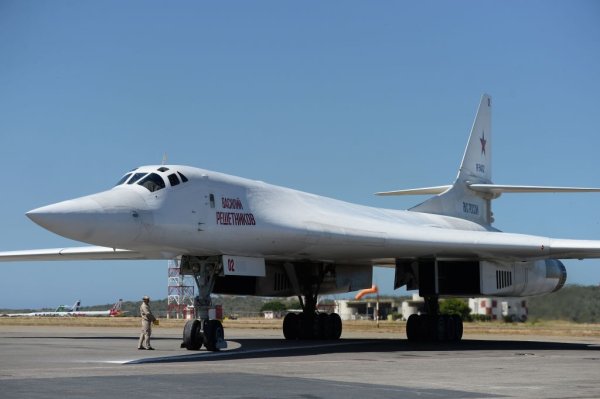 Why Russian Nuclear Bombers Are in Venezuela
Next Up: Editor's Pick