'If She’s Sent Back, Her Family Will Kill Her.' Saudi Woman Will Not Be Forcibly Deported From Thailand

A Saudi Arabian woman who fled her family to seek asylum has temporarily avoided deportation against her will from Thailand to Kuwait, where she fears domestic violence and possibly death after she renounced Islam.

Rahaf Mohammed Alqunun, 18, was stopped in Thailand’s Suvarnabhumi Airport in Bangkok on Jan. 5 while attempting to fly to Australia after originally departing from Kuwait.

She barricaded herself for hours in an airport hotel, fearing she would be put on a plane home immediately. But the Thai government and the U.N.’s refugee agency (UNHCR) confirmed after a long period of uncertainty that she would be given time to apply for asylum.

A UNHCR spokesperson confirmed to TIME on Monday that Alqunun had “left the airport to a safe place in the city,” where UNHCR staff will continue to interview her after she has rested.

Alqunun claimed to have a visa for Australia and planned to apply for asylum there, according to the Associated Press. But she reportedly had her passport confiscated by a representative from Saudi Arabia’s embassy in Thailand. In a statement, the Saudi embassy denied seizing Alqunun’s passport and said she was detained because she did not have a return ticket, the BBC reports.

In a series of videos and more than 100 tweets beginning late on Jan. 6, Alqunun implored the UNHCR and countries including Australia the U.S., Canada and the U.K for assistance. A Change.org petition supporting her garnered thousands of signatures in just a few hours, and the German ambassador to Thailand expressed “great concern.”

Alqunun says she has previously faced domestic abuse by male family members including beatings and death threats. She also said she was once detained in a bedroom for six months after she cut her hair, according to Human Rights Watch.

“She’s very afraid,” Human Rights Watch deputy Asia director Phil Robertson told TIME by phone on Monday, before the Thai government confirmed Alqunun would be allowed more time in the country. “It’s very clear if she’s sent back, her family will kill her.”

The UNHCR said in a statement it would “assess her need for international refugee protection and find an immediate solution for her situation.”

“UNHCR consistently advocates,” the statement went on, “that refugees and asylum seekers – having been confirmed or claimed to be in need of international protection – cannot be returned to their countries of origin.”

The Australian embassy in Thailand had earlier asked the Thai government and the Bangkok office of the UNHCR for assurances that Alqunun could be allowed to access the UNHCR’s refugee status determination process, according to a spokesperson for Australia’s Department of Foreign Affairs and Trade (DFAT).

“The claims made by Ms Al-Qunun that she may be harmed if returned to Saudi Arabia are deeply concerning,” the Australian spokesperson said.

However, DFAT, which is handling Alqunun’s case on behalf of the Australian government, declined to answer a question from TIME asking whether it would consider offering Alqunun asylum in advance of her arrival, given the exceptional circumstances.

Alqunun was expected to be on a Kuwait Airways flight at 11:15 a.m. local time Monday, but she has barricaded herself in her hotel room, and in a brief video message demanded to speak with the U.N. refugee agency. The flight departed at 11:39 a.m., according to Flightradar24. Alqunun is believed to have not been on board.

In a news conference Monday in Bangkok’s Suvarnabhumi airport, Thai Immigration police chief Maj. Gen. Surachate Hakparn said that Thai authorities would not deport Alqunun against her will, and would permit her to meet with the U.N. refugee agency.

“If deporting her would result in her death, we definitely wouldn’t want to do that,” he said, according to local news website Khaosod. “Since Thailand is the Land of Smiles, of course we won’t send someone to their death.”

Under Saudi Arabia’s male guardianship system, women are required to seek permission from a male family member to travel abroad, marry and work, among other restrictions, according to Human Rights Watch. On Sunday, the country’s justice ministry approved a new measure that would allow women to be informed of divorce by text message, ending a practice whereby men could “secretly” divorce their wives without informing them. 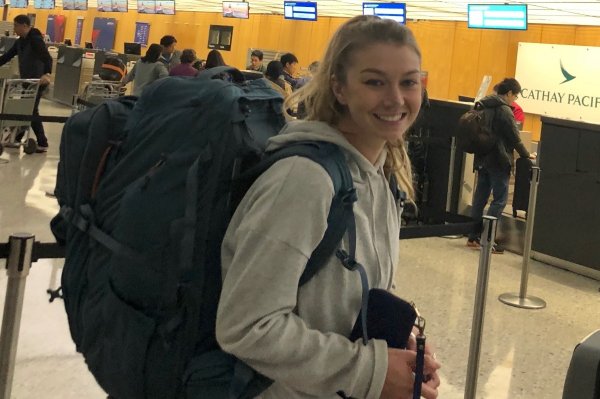 A Paralyzed American Teacher Stranded in Thailand Is Coming Home After a GoFundMe Raised $76,000
Next Up: Editor's Pick