Of all the memes that Gaga has inspired, her telling of the story of how she came to star in Bradley Cooper’s A Star Is Born is among the best. It’s no surprise that Sandra Oh and Andy Samberg used their 76th annual Golden Globes monologue to poke fun at the star’s much-repeated anecdote.

In many interviews since the film’s premiere in October, Gaga has emphatically told the same story: That despite the fact that Gaga had never starred in a film before, Cooper believed in her, and that’s all that they needed to make this wild—and wildly successful—dream come true.

“There can be a hundred people in the room and 99 don’t believe in you, but just one does, and it can change your life,” Gaga has said, in various iterations with different phrasing, often gesturing to Cooper lovingly to indicate that he was her one-in-one-hundred.

Oh and Samberg, who co-hosted Sunday’s Golden Globe Awards, couldn’t pass up the opportunity to riff on the meme.

“It just proves—and I’m just coming up with this now—that there can be 100 people in a room, and 99 don’t believe in you, and you just need one to believe in you. And that was Bradley Cooper,” Oh said during the duo’s opening monologue. Gaga interrupted Oh to shout, through her laughter, “It’s true!”

Samberg continued the joke by paraphrasing Oh’s story. Lady Gaga gamely kept on laughing—with Cooper by her side, of course.

Watch Gaga’s reaction to the joke below. 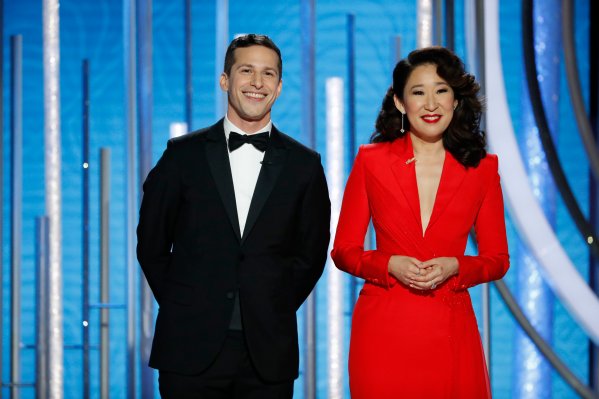 Here Are the Best Jokes From Sandra Oh and Andy Samberg's 2019 Golden Globes Monologue
Next Up: Editor's Pick