United States Representative Alexandria Ocasio-Cortez of New York waves to the gallery as the 116th Congress convenes for its opening session in the US House Chamber of the US Capitol in Washington, DC on Jan. 3, 2019.
REX—Shutterstock
By Anna Edney, Arit John and Erik Wasson / Bloomberg

(Bloomberg) — Senior Democrats distanced themselves from a House member’s profanity-laced call for President Donald Trump’s impeachment, but New York Representative Alexandria Ocasio-Cortez on Saturday flew to the defense of her fellow freshman.

“I got your back,” Ocasio-Cortez tweeted at Representative Rashida Tlaib of Michigan, who created a stir by telling supporters on Thursday that “we’re gonna go in and impeach the motherf—–,” referring to the president.

The Tlaib brouhaha is the latest example of how some of the party’s new members, swept into office in November’s midterm elections, are pushing boundaries and creating headaches for Democratic leaders.

Her comments, made at a reception hosted by progressive activist group MoveOn, were caught on video and reported by The Washington Post. Tlaib’s office didn’t respond to requests for comment but in a statement to BuzzFeed News said she “absolutely believes he needs to be impeached.”

Trump called the comments “disgraceful” and “highly disrespectful” to the country on Friday.

Ocasio-Cortez went after the Republican Party for criticizing Tlaib.

“Republican hypocrisy at its finest: saying that Trump admitting to sexual assault on tape is just ‘locker room talk,’ but scandalizing themselves into faux-outrage when my sis says a curse word in a bar,” she told her 2 million Twitter followers.

House Speaker Nancy Pelosi, who’s been trying to tamp down talk of impeaching Trump as Democrats try to move on their legislative agenda, said Friday that Tlaib’s stance “is not the position of the House Democratic caucus.”

She declined to chastise Tlaib for the vulgarity, saying that while she doesn’t use that kind of language she’s “not in the censorship business.”

Republicans seized on both Tlaib’s impeachment call and her language.

“They announce they are going to impeach the president. On what basis?” said House Minority Leader Kevin McCarthy. “How do you work with anybody if this is what they really have planned?”

House Republican Conference Chairwoman Liz Cheney — whose father, former Vice President Dick Cheney, once directed a profanity at a Democratic senator on the Senate floor — decried the use of “foul language” and said she worried her children would hear of it.

House Majority Whip Jim Clyburn, a South Carolina Democrat, said “everyone has their own style” and Tlaib’s “ain’t mine.” He added that one Democrat’s comments shouldn’t reflect the whole caucus.

“I don’t think anybody should ascribe to all the Democrats what one member might say,” Clyburn said. “I don’t think we ought to be talking about impeachment until we get this country back on track.”

Pelosi said discussions about impeachment would only help Trump solidify the support of his base. She added that she didn’t think Tlaib’s comments were worse than anything the president has said. 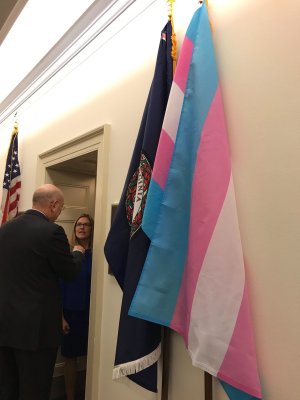