How Nancy Pelosi Gets Under Donald Trump's Skin

As Speaker of the House, Nancy Pelosi is skilled at counting votes, fundraising and keeping her caucus in line.

But she has an underappreciated talent that may prove helpful in the Trump era, especially as the partial government shutdown enters its second week: Snarking.

As with many congressional leaders, Pelosi’s public comments are sometimes overlong, but when she goes in for the kill, she’s quite effective at one-line jabs, and she seems to know how to hit back at Trump.

Partly, that’s by questioning his masculinity. During the current shutdown fight, she told House Democrats behind closed doors that his fight for a border wall was “like a manhood thing for him,” and in an interview she compared scaled-back plans for the wall to “a beaded curtain.”

During a press conference ahead of the shutdown, she also took aim at the time he spends at his golf courses.

“Maybe he thinks if government’s shut down, he can golf more comfortably,” she said. “That’s not how it works.”

When Pelosi herself went on vacation in Hawaii while Trump stayed in D.C. during the shutdown, the White House criticized her, with Trump advisor Kellyanne Conway saying “less hula, more moola.” But Pelosi again fired back.

“The president may not know this, but Hawaii is part of the United States of America; maybe he doesn’t realize that,” she said. “That’s why he said Barack Obama wasn’t born in the United States when he was born in Hawaii.”

The snarky rejoinders and barbed quips give Trump what he’s lacked during his first two years in office: an effective foil. Since Pelosi is now third in line to the presidency, she’s a singular figure whose responses are more likely to be quoted than when Trump faced Democrats who were out of power. That’s helpful for Democrats looking to counter Trump’s constant messaging.

But they can also work by getting under Trump’s skin. As can be seen in the video above, Pelosi irritated Trump in an Oval Office meeting with Senate Minority Leader Chuck Schumer to the point that he blundered, bragging that he would proudly own a government shutdown.

As Pelosi’s daughter, Alexandra, argued in a recent TV appearance, she is an effective fighter in any war of words.

“She’ll cut your head off and you won’t even know you’re bleeding,” she said. “That’s all you need to know about her.” 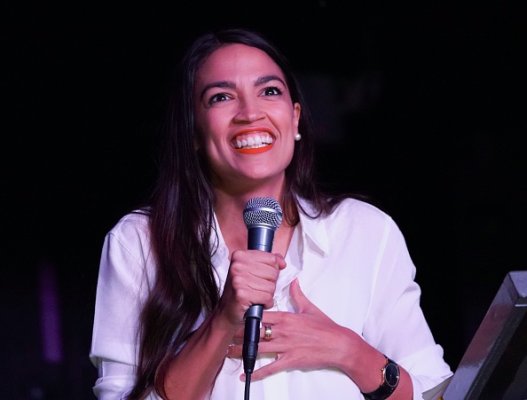 Alexandria Ocasio-Cortez's Dance Is So Popular Someone Is Already Putting It With Iconic Songs
Next Up: Editor's Pick