Syrian Women Are Embracing Their New Lives in Germany. But at What Cost?

Aya sits in the bedroom where her 2-year-old son Joud once slept. Her husband took Joud back to Syria after she asked for a divorce.
Nanna Heitmann for TIME
By Aryn Baker

When Aya, a 23-year-old Syrian refugee living in the west German town of Xanten, came home from her language lessons one afternoon in October, the house was in disarray. A frantic search revealed that her 2-year-old son’s stroller was missing, along with their passports and IDs. She tried her husband; his phone was off. A few hours later Aya received a telephone call from Syria. “Go pack your bags,” her husband’s brother told her. “Mohammad is taking Joud to Syria, and he wants you to go with them.”

The instructions were simple. If she wanted to be with her son, she would have to retrace the path she and her husband had taken more than three years ago, when they sought refuge in Europe. Instead, Aya called the police. Her son, after all, had been born in Germany. Her time in the country had taught her that she had rights.

But it was too late. The police said her husband and son had taken a plane to Greece that morning. Her brother-in-law filled in the rest: as soon as they arrived, a smuggler took them across the border to Turkey, and they were now headed to Syria. A few days later, a series of text messages jolted Aya out of her grief. “If you want your son, you have to come back to us,” her husband wrote from his hometown of Idlib, where a unsteady truce held between the two sides in the war. “You are becoming German. Come back to your culture, your religion and your people. Come be a good mother again.”

In just a few messages, Mohammad laid out a central preoccupation for many Syrian refugees in Germany: how to embrace the freedoms of their new home while preserving the culture and traditions of the one they left behind. It has been three years since the first big wave of Syrian refugees arrived in Germany. Now that they are over the initial shock of dislocation, their focus is on building their lives anew. Some have managed to take the best from both worlds. Many others struggle, fearful that in becoming German, they will lose their Syrian identity. But if they don’t adopt some German ways, they risk isolation from the jobs and activities that can help them flourish.

“Traditions and community are good for psychological health. But if you are stuck too much in the home culture, it can make it difficult to integrate here,” says Mona Bünnemann, a clinical psychologist who works with refugees in the city of Bielefeld, near Xanten. German culture emphasizes individual freedoms that are often at odds with societies that cherish extended family ties and the responsibilities that come with them. Unlike previous waves of immigrants who came in search of jobs and were better prepared to adapt to their host country, the recent cohort of Syrian refugees had little choice about leaving home or even where they ended up. For some, the requirement to learn German and embrace German values can feel like an imposition rather than an opportunity, especially when those values come into conflict with Syrian customs.

One of the biggest areas of stress, Bünnemann says, is the role of women in society. Recently she has started to see an increase in marital tensions. “The women are revolting more often. Now that they are not merely surviving anymore, they observe the society around them. They get to know German families and want to have the same freedoms.” Some are so determined to assert their new rights that if they don’t get them, they ask for a divorce.

When Aya and Mohammad arrived in Germany in September 2015, they had been married only a month. Life in the refugee camp was tough, and Mohammad often took out his frustrations on his wife. “People heard me screaming,” says Aya, who asked that she and her husband be identified only by their first names in order to protect her son. “But no one said anything because in our society, it’s not anyone’s business that a man beats his wife.” The beatings stopped when Mohammad and Aya enrolled in mandatory German-language and integration courses. Aya learned about women’s rights in Germany, and Mohammad learned that beating his wife was illegal. Their son was born a year later.

Aya, a top architecture student back in Syria, flourished in her German classes, but Mohammad struggled and soon grew jealous of his wife’s progress. “Aya was much cleverer, and that was a problem for him,” says Anna Pieper, a volunteer for the Caritas aid organization who helped the couple settle in. Soon Aya was handling all the German paperwork for the family, she says, and Mohammad felt that undermined his role as man of the house. The more Aya made friends with fellow students and German mothers in her son’s playgroup, the more Mohammad retreated into the traditional Syrian community centered at a nearby mosque, where he found men who shared his anger and his struggle to find work.

Mohammad resented Aya’s demands that he help out with the household chores while she continued her German studies. “He wanted to live in the Syrian way, but I wanted a new life here in Germany.” She switches from Arabic to nearly accent-free German to continue: “I love it here. He doesn’t.”

They argued so much, Aya says, that living together became intolerable. Upon encouragement from a friend, Aya did something she never would have done in Syria. She asked Mohammad for a divorce. “I felt like I had rights as a woman, and I didn’t care about what Syrian culture and society said,” she says of the shame that divorce carries back home. It was two weeks later that Mohammad returned to Syria. The only way Aya could get Joud back, he texted, would be if she tore up her asylum papers in front of him.

Rasha, 32, arrived with her family from Aleppo in 2016. Despite her husband’s encouraging her to remove her headscarf—in addition to learning German and finding a job to contribute to the household income—she says she is not ready, comparing it to going out in public naked.
Nanna Heitmann for TIME

Integration was at the cornerstone of German Chancellor Angela Merkel’s decision to accept nearly 1 million refugees in 2015 and 2016. The newcomers–about half of them Syrians–were expected to learn German and eventually find jobs. In part, this was to ease German voters’ fears that they would be a drain on the economy, as well as to avoid the ghettoization suffered by earlier waves of migrants from Turkey and the Balkans. But cultural integration was never so clearly defined.

“At the beginning, everyone was so enthusiastic,” says Pieper, who helped settle some of the hundreds of Syrian families who arrived in Xanten in 2015. “But now Germans are coming to terms with what integration means, and it’s a lot more complicated.” As the initial support cooled, the far-right AfD party has tapped into anti-immigrant sentiment, entering parliament for the first time in 2017. Under pressure, Merkel announced in October that she wouldn’t stand for another term.

To many Syrian men and women, the word integration is tied to the loss of a deeply cherished sense of cultural identity. “Becoming German means losing my Syrian values and traditions,” says Rasha, 32, who arrived with her family from Aleppo in 2016. Despite her husband’s encouraging her to remove her headscarf, she says she is not ready–comparing it to going out in public naked.

Rasha’s husband Ghassan says things would be different in Syria, where extended families provide a safety net. He wants her to learn German and find a job to contribute to the household income. “Why should my wife not be strong and independent? What if something happens to me? She should be able to work.”

But Rasha, who married Ghassan when she was 14 and now has five children, knows nothing about working outside the home. “No one, aside from my husband, is asking me to change anything,” she says. “We already lost our home. Our values are what keep us linked to our society and culture. They are all we have left.”

The challenge, not only to refugees but also to any first-generation immigrants, is that values can double as barriers. The Syrian gossip network is rife with criticism of refugee parents who allow their teenage daughters to spend time with boys, or divorcées and widows who start dating men–especially German men. “The day people found out I was seeing a German, I lost all my Syrian friends,” says Oula Shaoud, a 35-year-old single mother from Tartus. She has found companionship, but she has also lost her final tie to her homeland–her community. “I feel so isolated now,” she says, still not sure she made the right choice.

Bünnemann, the psychologist, says that dilemma frequently comes up in her work. Having a social support network is vital for refugees’ emotional stability, she says, but the challenge arises when personal needs–to leave an abusive relationship, to claim independence, to date–conflict with cultural norms. “I do get why someone would not want to offend the only network he or she has.”

Oula Shaoud, a 35-year-old single mother of four children, in her kitchen in Anröchte, Germany.
Nanna Heitmann for TIME

The German justice system has laid kidnapping charges against Mohammad, and if he ever returns to the European Union, he will be arrested. Although Joud was born in Germany, the government considers him a citizen of Syria, where its police have no jurisdiction. If Aya returns to Syria to search for her son, she will forfeit her right to asylum in Germany.

Pieper says the only hope is that Mohammad will realize his child will have more opportunities in Germany and let him come back. Aya thinks that’s unlikely. “Mohammad is afraid of integration. He is afraid Joud will grow up German.”

That presents Aya with an agonizing choice. She misses Joud desperately and spends most of her days in his bedroom, looking at his photo albums, obsessively folding his clothes and holding his pajamas to her nose. He wore them the night before he disappeared, and they still carry some of his scent. A sister-in-law, who lives in the same family compound as Mohammad in Idlib, sends clandestine updates on Joud’s condition. Sometimes, if Mohammad is out, she helps Aya and Joud talk via video messenger, but he is too young to understand what is happening. Meanwhile, tensions in Syria are rising again as the U.S. begins pulling out its troops. News coverage of a looming battle near Idlib is giving Aya nightmares. “I left Syria because I didn’t want to have a kid in that situation, and now my son is there without me.”

After months of waiting, Aya is considering giving in to Mohammad’s demands and returning home. But the price is steep. “If I go back to Syria, I’d lose everything I learned in Germany,” she says, scrolling through photos of her life in exile on her phone. Even if she got divorced and managed to keep Joud, it would be impossible to continue her architecture studies as a single mother. “I will lose myself back in Syria. I will lose my rights, my asylum and my education. Everything.” She pauses on a photo of her son at his second birthday party, in September, and blinks back tears. “Joud is more important than any of this.”

With reporting by Abeer Albadawi/Xanten 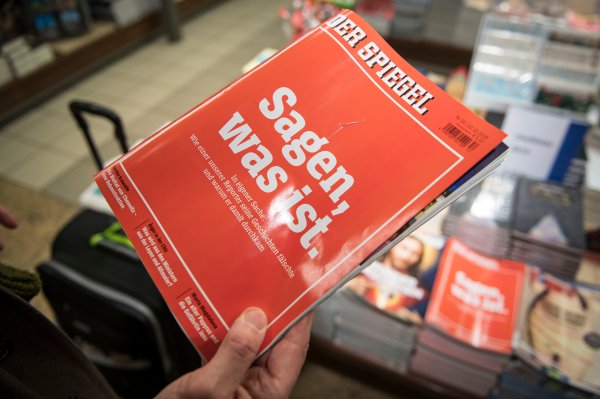 Der Spiegel to Press Charges Against Fraudulent Journalist
Next Up: Editor's Pick