What made you want to make Vice, your new movie about Dick Cheney?

A friend had given me a book about him. Every five pages I was like, You’ve got to be kidding. I was astounded by the depth of his influence, and the brilliance of it too. He got that call from George W. Bush [asking him to be VP]. If he doesn’t get that call, American history goes very differently.

Is joking about Cheney or Donald Trump just healthy catharsis, or can it be dangerous?

I think you can cover how ridiculous it is, but you have to cover the real-world side as well. That’s something we sometimes lost with W. Bush and Reagan, and we’re losing it with Donald Trump. He is ridiculous. There’s never been a leader like him. But real things are happening. You have these leaders we make fun of, but behind them are dark consequences.

There’s a montage in Vice that depicts the opioid epidemic, natural disasters, the refugee crisis. Are you suggesting Cheney is to blame?

Oh, no. In some cases, Cheney is fairly involved, like the Syrian refugee crisis, killing action on global warming. But he’s a symbol of an era where a lot of powerful messaging was put forth that government doesn’t solve things. School shootings, the opioid crisis, global warming–there doesn’t seem to be any even remotely serious effort to deal with these problems, which is precisely what government’s for.

Did he become more human the more you tried to understand him?

What intrigued me was that he wasn’t a sociopathic monster in the beginning. There’s this guy from Wyoming who cracked wise and played football and fell in love with the state baton-twirling champion. There is something very human about him in the beginning and how he wants to move forward in the world with a family. Yet somehow that ambition, that American Dream, became something much darker.

You satirized the W. Bush years as a writer on Saturday Night Live. Was this a return to form?

Part of the goal was to break this pattern of looking at each Administration as its own thing. The way we looked at it was, What is this lure of power? What does this do to a person that they turn a job for the public good into their own firepit of power? Cheney felt like a good subject, especially because he eschews the spotlight. This guy in no way wanted a movie about his life. When you see that, you know you’ve got real power going on.

To people who know you for Anchorman and Talladega Nights, tackling the subprime-mortgage crisis in The Big Short and then Dick Cheney in Vice might look like a leap.

We’re just responding to the times we live in. The late ’90s and early 2000s felt like a great time for absurdist comedy, mocking things like an anchorman’s sexism in the workplace. Then the world kept changing, and it got to a point where those movies wouldn’t have made sense. Once we’re done with this movie, there’ll be that same question–what movie we’ll possibly want or need right now.

You’ve been tweeting a lot about global warming. Is that a contender?

I think that’s the ultimate ball of reality rolling toward the horizon line, the thing that could snap everyone into a state of reality and take us out of this garbage we’re caught up in. But what do you say in a movie about that?

You had a heart attack that you attributed to the stress of this movie. I hope you’re doing better.

It leads me to wonder whether you might take on a less stressful subject for your next movie.

My editor keeps joking, “Can’t we just do a love story?” He might be onto something. 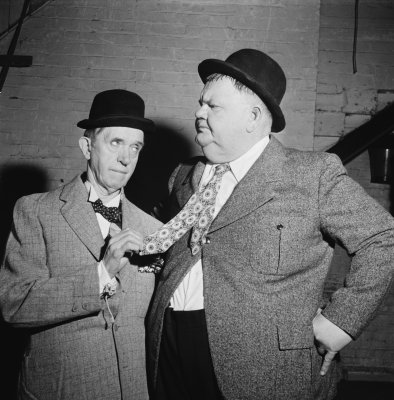 The Not-Always-Funny True Comedy Story Behind the Movie 'Stan & Ollie'
Next Up: Editor's Pick