The Silent Shame of Male Infertility

Goldman took steroids for years, which depleted his sperm count. Now he and his wife want kids
Ryan James Caruthers for TIME
By Mandy Oaklander

Bradley Goldman has filled out a size large T-shirt his whole adult life. As a bodybuilder, he knew that a steady stream of lean, bland proteins, heavy weights and steroids would make his muscles pop.

But over the past six months, Goldman, a fitness and nutrition consultant in Los Angeles, has watched his jacked physique soften and shrink. “I cracked a couple of weeks ago, and I had to buy a shirt a whole size smaller,” he says. He tried it on for his wife Brittany, and it hung loose on his frame. “I just kind of shook my head,” he says. He knew she saw the changes too.

Goldman, now 30, began taking steroids at 18. He’d heard they could interfere with fertility–steroids can shut down the body’s natural production of testosterone–but like many young men, he was more concerned with not having babies than with having them. Now he and his wife are trying to get pregnant, and though he gave up steroids two years ago, it seems the damage is done.

When he got a semen analysis last March, his sperm count came back a flat zero. “It was earth-shattering,” he says.

He started taking fertility drugs to help his testicles recover. But three months later, he still had no sperm. He’d been injecting himself with testosterone because his body could no longer produce it naturally, but his doctor recommended he stop in order to make the fertility drugs more effective. Now his sperm count is slowly climbing, but his sex drive has withered, along with his energy and 30 pounds of muscle. He has fat in places he never had before, including his breast tissue. He’s become depressed.

On his social-media accounts, Goldman has scaled back on shirtless photos and posts more long-sleeved shots instead. But beyond confiding in his wife, he hasn’t publicly shared what’s really going on. “I have 10-plus thousand people that follow me on Instagram,” he says, “who don’t know who the f-ck I am.”

Infertility is almost always thought of as a woman’s issue, and it’s true that women bear the greater burden of it. They are the ones who ultimately either get pregnant or don’t, and regardless of which partner has the fertility problem, the woman’s body is usually the site of treatment. In vitro fertilization (IVF), for instance, often requires just a sperm sample from men but a great deal more from their female partners: injections of synthetic hormones, blood tests, ultrasounds.

And yet up to 50% of cases in which couples can’t have babies are due in some way to men. More men are talking about it now, but it remains stigmatized, especially in the U.S. Men are largely absent from public conversation around infertility, and even those who have looked for support hesitate to identify as someone struggling with male infertility.

“I feel like I’m your stereotypical masculine-looking man,” Goldman says. “I’m tattooed. I have muscles. I work out. And I’m infertile. How many other guys out there that have this machismo, this mind-set about them, are in my shoes as well?”

Some men, like Goldman, know why they’re infertile. One of the most common causes is a varicocele; veins in the scrotum sometimes grow too big and tangle, which can make the testicle heat up and impair sperm function. This can often be fixed with surgery. Certain medications, including steroids and hair-loss drugs, are also known to affect fertility in men, as are obesity and other medical issues. Recent research suggests that age is another contributor–sperm quality, not just egg quality, decreases with time.

But many cases of male infertility are idiopathic, meaning their cause is a mystery to doctors. Genetics or other health factors might be at play, or it might be something environmental. Diet, alcohol, air pollution, stress, pesticides, compounds in plastics, even wearing briefs instead of boxers: research has implicated all of these in the potential degradation of fertility, and scientists are trying to figure out what’s most important. The matter appears to be getting more urgent. A 2017 analysis of studies, published in the journal Human Reproduction Update, found that among men living in Western countries, sperm count has declined more than 50% in less than 40 years.

In the three years that Dr. James Kashanian has been practicing urology at Weill Cornell Medicine in New York City, he’s noticed a shift in how men approach the issue. Couples used to assume the problem was with the woman, jumping to IVF and intrauterine insemination (IUI)–in which sperm is inserted directly into the uterus–before exploring issues with the man. “Now, physicians, patients and couples are more aware of this male factor, and they’re looking to get answers sooner,” he says.

After men leave the doctor’s office, though, they often experience raw feelings: guilt, for being the reason their partner can’t get pregnant with their biological child and for what she’ll have to go through to do so; shame, for not being able to perform the basic feat of reproduction; loneliness, because they feel like they’re the only ones in this situation.

“There’s been this idea historically that men aren’t bothered about being infertile or about reproduction or children, which isn’t true,” says Esmée Hanna, a male-infertility researcher at De Montfort University in England. In a 2017 survey, Hanna and a team of researchers asked 41 men how infertility affected their lives; 93% said it had a negative impact on their well-being and self-esteem. The same themes kept coming up: men felt depressed, lonely, anxious about a future without children–even suicidal. Yet nearly 40% of them had not sought support.

Infertility is private for a lot of women too. But women have options for finding a community that can relate to what they’re going through, including support groups, online discussion boards and Facebook groups. Even though 12% of U.S. men ages 25 to 44 are infertile, there are few groups–in person or online–devoted to male infertility. One of the most popular men-only Facebook groups, Mens Fertility Support, doubled in size in 2017. Still, it has fewer than 1,000 members.

Andy Hansen, a 33-year-old X-ray technologist who lives outside St. Louis, is among them. In 2015, he learned he had a low sperm count due to a varicocele. His numbers went up after surgery, but after five years of trying, five rounds of IUI and IVF and two miscarriages, he and his wife remain childless. “The ‘blame’ has shifted back and forth,” he says. “We both know what it’s like to be on that end of it.”

They attended an event at their clinic hoping to meet couples in their situation, but as Hansen recalls, there were few men, if any. He tried an infertility Facebook group with over 20,000 members. “There just weren’t any guys, maybe one or two,” he says.

Finally, he found Mens Fertility Support, through which he and other men can advise one another and commiserate. “Keeping it in is just exhausting,” Hansen says. He’s noticed, however, that most members of the group are based in the U.K. In the U.S., “a guy tends to feel like he has to be the rock,” Hansen says.

“So much of masculinity in America is about being as strong, independent and capable as other men,” says Liberty Barnes, a medical sociologist and author of the 2014 book Conceiving Masculinity: Male Infertility, Medicine, and Identity. “If you can’t get your wife pregnant, you can’t help but compare yourself to other men and feel inferior.”

But ideas about masculinity can be surprisingly flexible in the face of infertility, Barnes says. For her book, she interviewed 24 American couples, once after the man was diagnosed with infertility, then again almost two years later. “You could see they were doing a lot of work trying to process their experience and redefine what masculinity meant to them,” Barnes says. The men emphasized their role as a good husband or their preparation to be a good father. For many, being a man meant going through every type of fertility procedure–no matter how painful–“basically to prove to their wife that I’m strong, I’m brave, I’m willing to do anything it takes.”

Goldman avoided joining the Facebook group for a month after his wife told him about it. “I was not about to share with a bunch of random dudes what I’m going through,” he says. Finally, though, he relented. When he read a post from a man whose struggles with infertility led him to consider suicide, Goldman broke down in tears. “That’s what so many men go through, and just keep their mouth shut,” he says.

Phyllis Zelkowitz, director of research in psychiatry at the Jewish General Hospital in Montreal, thinks online groups hold a lot of promise because they normalize an isolating experience. It’s hard for men to talk about these issues, she says, “because they’re out of tune with their peer group–most of the people that they know are having babies, and they’re not.” She and a team are now testing an app they developed, called Infotility, that offers men steps to take to improve their fertility as well as a message board.

Goldman posted once to the private Facebook group; beyond that, he isn’t open about his infertility on social media. But lately he’s been toying with the idea of making a YouTube series about his experience. “It doesn’t make you soft to talk about it,” he says. “It doesn’t make you less of a man.” If he can let even one other man know he’s not alone, “then putting my story out there and being vulnerable is totally worth it.” 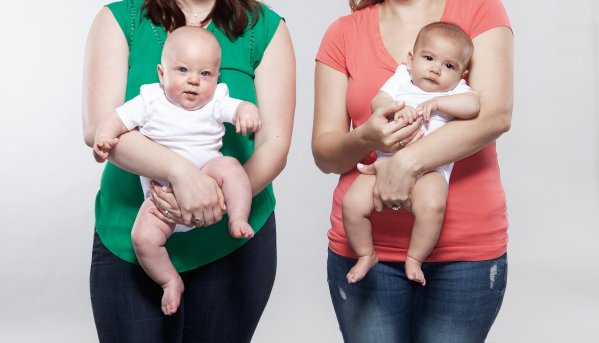 Thousands of Women Are Born Without a Uterus. A New Procedure Offers Them Hope
Next Up: Editor's Pick