It's Finally Oscars Time. Here's What to Know About the 2019 Awards Season That Lead Us Here.

It’s time to talk about the 2019 awards season.

Now that the Golden Globes and the Grammys are in the past, it’s almost the big night: the 91st Academy Awards. Roma and Bohemian Rhapsody could win big at the Oscars after successful showings at the Golden Globes, but Black Panther may be the black sheep of the season after its big wins at the 2019 Screen Actors Guild Awards.

Here’s your guide to the 2019 award show season, along with what happened at the Golden Globes and the Grammys, as well as the Oscars date—and what to expect from the ceremony.

What can I expect at the 2019 Academy Awards?

The Academy’s turn is Sunday in the awards season. The 2019 Oscars date is Feb. 24 airing live on ABC at 8 p.m. E.T. from the Dolby Theatre in Los Angeles. After much speculation and controversy, this year’s ceremony will be host-less.

Though the Golden Globes surprised many with the results, we can’t be sure what will happen at the Oscars. Despite the controversy surrounding sexual assault allegations against Bohemian Rhapsody‘s credited director Bryan Singer and the racial tropes critics saw in Green Book, they remain frontrunners for top awards. Green Book won Best Picture (Drama) at the Golden Globes, and it’s been nominated in five categories, including Best Picture. Bohemian Rhapsody, also nominated for Best Picture, has a total of five nominations.

The year full of biopics also leaves Vice, a Best Picture nominee, as a contender for its eight nominations at the Oscars.

Originally, the Academy chose Kevin Hart to host the 91st Academy Awards, but he stepped down following controversy surrounding homophobic tweets that had resurfaced. The actor-comedian tweeted that he didn’t want to be “a distraction on a night that should be celebrated by so many amazing talented artists.” Hart’s decision to step down followed an Instagram post explaining that he refused to apologize for the tweets, as the Academy had asked him to do.

Though the Academy will continue without a host, the show is set to go on with performances and skits to break up the broadcast. Bradley Cooper and Lady Gaga will perform their hit song “Shallow” from A Star Is Born. The song, co-written by Gaga, is nominated for Original Song at the ceremony.

This year’s nominees for the 91st Academy Awards were somewhat similar to the 76th Golden Globes. The Favourite and Roma lead the nominations with ten, and Vice and A Star Is Born are also tied with eight nods each.

Black Panther has already made Oscars history as the Marvel film is the first superhero movie ever nominated for Best Picture.

Who won big at the 2018 Oscars was not much of a surprise. Guillermo del Toro’s The Shape of Water led the awards show last year with the most nominations, including Best Picture, Director and Original Score. Other early favorites like Three Billboards Outside Ebbing, Missouri succeeded, too, with lead Frances McDormand beating I, Tonya‘s Margot Robbie for Best Actress.

Earlier this year, the Academy announced its plan to add a category for Outstanding Achievement in Popular Film, which was designed to recognize films like Avengers or Crazy Rich Asians for being fan-favorites. The plan was put on hold in September, and the category will not be added in 2019.

What happened at the 2019 Grammys?

The Grammys 2019 were Feb. 10 at 8 p.m. E.T., and the show was broadcast live on CBS from the Staples Center in Los Angeles. This year’s show was hosted by Alicia Keys. The R&B singer has won 15 Grammy awards to date.

Global K-Pop sensation BTS presented at the ceremony, and the group received one nod for best recording package for “Love Yourself.”

The Recording Academy honored pop icon Diana Ross in a special performance during the ceremony. The 12-time Grammy nominee wished herself a happy birthday in an unforgettable moment.

As for other artists gracing this year’s stage, the Academy announced on Jan. 17 that a slew of this year’s nominees will be performing during the show. Camila Cabello, Cardi B, Dan + Shay, Post Malone, Shawn Mendes, Kacey Musgraves and Janelle Monae were among the acts. Both Mendes’ and Cabello’s performances were be Grammy debuts, and country duo Dan + Shay are first-time nominees.

Nominations for the 61st Grammy Awards were announced in December, and only music released from Oct. 1, 2017 to Sept. 30, 2018 was eligible for the 2019 Grammy Awards. Anything released after that September cutoff date cannot be considered for voting.

Kacey Musgraves was the star of the night, taking home awards in each of the four categories she was nominated, including Album of the Year.

Kendrick Lamar and Drake led the year’s nominations, with many other hip hop artists including Cardi B and Donald Glover (Childish Gambino) in the top, too.

Childish Gambino won four of his five nominations. His winning music video for “This Is America,” which also won Song of the Year, made waves for its use of metaphors about gun violence, police brutality and racism in the U.S. The music video for Joyner Lucas’ “I’m Not Racist,” which explores similar themes, was also nominated, but lost to Gambino’s video. Donald Glover, the real-life man behind the music of Childish Gambino, did not attend the Grammys, along with other stars like Rihanna and Ariana Grande.

Alessia Cara’s win for Best New Artist in 2018 was the ceremony’s only female win for a major category. Perhaps in response to that controversy, the Recording Academy—the body of artists that decides the winners of the Grammy Awards—invited 900 new members to join its ranks earlier this fall, as part of its new Task Force on Diversity & Inclusion. “Part of the objective here is to ask people to join us, to be part of the change [to] diversify the Academy and the industry as a whole,” Task Force Chair Tina Tchen told Billboard.

This is not the only change to the Recording Academy this year. The number of nominees for Best New Artist, Song of the Year, Record of the Year and Album of the Year has been increased from five to eight in another effort to broaden the Academy’s flexibility and reach.

What happened at the 2019 Golden Globes?

The 2019 Golden Globes kicked off the 2019 awards calendar on Jan. 6, hosted by Saturday Night Live alumnus Andy Samberg and Sandra Oh, who also won during the ceremony for her role in the series Killing Eve.

Oh and Samberg followed 2018 Golden Globes’ host Seth Meyers—another Saturday Night Live alumnus—as hosts. Both actors have won Golden Globe awards in the past, for Grey’s Anatomy and Brooklyn Nine-Nine, respectively. Oh won her nomination for Best Television Performance by an Actress (Drama) for her role in Killing Eve, joining a list of actors who have won awards during a ceremony they hosted.

Despite early speculation that the duo was an unexpected choice, the two made some funny (and some less-funny) jokes in their opening monologue, poking fun at Lady Gaga of A Star Is Born and giving effusive compliments to other stars in lieu of roasting everyone.

Bradley Cooper’s A Star Is Born was expected to win big at the 76th Golden Globes. But it didn’t sweep. The movie only won one award for “Shallow,” the soundtrack’s first single, in Best Original Song (Motion Picture). Instead, Queen biopic Bohemian Rhapsody swept the awards show, despite less-than-stellar reviews.

If Beale Street Could Talk, Barry Jenkins’ adaptation of James Baldwin’s 1974 novel of the same name, was another favorite with multiple nominations. Regina King took home the prize for best supporting actress in a motion picture for her turn as Sharon Rivers.

On the television side of things, The Kominsky Method was lauded despite negative criticism. But it wasn’t all a surprise: Rachel Brosnahan won Best Actress in a Musical or Comedy TV Series for her Marvelous Mrs. Maisel performance.

What’s the difference between the Oscars and the Golden Globes?

Though the Golden Globes started the season, this awards show was not the only chance for actors to nab accolades. The Oscars, coming in February, will give many of the same films another shot at glory. What’s the difference between the Golden Globes and the Oscars? Technically, there are two differing factors. While the Academy Awards honors work in film exclusively, the Golden Globes have awards for both film and television.

And, another notable difference between the two awards shows: the pool of voters that decides each category’s winner. The Golden Globe awards are chosen by the Hollywood Foreign Press Association, a nonprofit that has donated millions of dollars to charities, funds and more that are devoted to entertainment and the arts. The Academy Awards is presented by the Academy of Motion Picture Arts and Sciences.

The Golden Globe Awards also includes best picture categories for both drama and musical/comedy films, which can help to pave the way for more widely popular flicks. 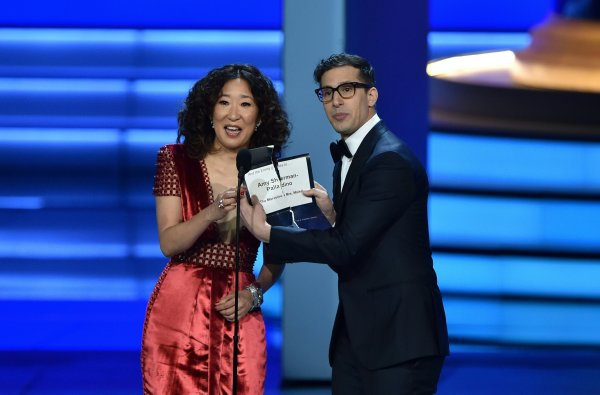 These Awards Show Hosts Also Won During the Ceremony
Next Up: Editor's Pick