Koch Network to Push for Legal Status for Dreamers in 2019

In this February 26, 2007 file photograph, Charles Koch, head of Koch Industries, talks passionately about his new book on Market Based Management.
Wichita Eagle—MCT via Getty Images
By Philip Elliott

The politically savvy donor network helmed by billionaire Charles Koch plans in 2019 to use its deep pockets to push for an overhaul of the nation’s immigration system, including permanent legal status for for young people who came to the country illegally, according to an email obtained by TIME and verified by a Koch spokesman.

The Koch donor network, among the most powerful force in conservative circles, also plans to tackle poverty, addiction and education in the coming two-year election cycle, according to the message.

To make sure their policy ideas have support in political halls, donors intend to use their wealth to focus on House, Senate and gubernatorial races where candidates share the Koch network’s thinking — but not the presidential contest in 2020 when President Donald Trump is expected to stand for re-election.

The Koch network of hundreds of individual donors has strong influence among conservative lawmakers and candidates. It flexed its muscle to help the Republican-led House and Senate pass a major tax cut in 2017 and last year did the same to help shepherd a criminal justice package to Trump’s desk with broad bipartisan support. But as was the case in 2016, when Trump was the GOP nominee, the Koch-aligned groups will not spend cash to help his bid.

“We are making significant investments to unite the country and address critical issues that will help people improve their lives,” Koch spokesman James Davis told TIME. “This starts with a major new initiative to fight poverty in America, and following on the success of the First Step Act in December continuing to build broad-based policy coalitions on issues from education reform to immigration. These will include a significant investment to support policy champions in Senate, House and state races. This is where we can make the biggest difference for millions of Americans.”

That approach reflects the broader thinking among Koch World donors. While the network, then helmed by brothers Charles and David Koch, played a significant role in building the early incarnations of the conservative Tea Party movement, the focus on partisan politics has been fading in recent years. David’s retirement last year marked a turning point for the groups that operate under the Koch umbrella, and many donors — especially younger ones and those newer to Koch circles — have shown more interest in social justice issues than the naked partisanship that marked many of the recent electoral cycles. One Koch-aligned group even spent cash to thank Democratic Sen. Heidi Heitkamp, who lost her re-election bid last year, for her vote to roll back some financial regulations.

Koch allies have instead suggested that politics, especially at the presidential level, was an unnecessary detour away from the broader goals of the like-minded donors. After all, since the network’s first gathering in 2003, the Koch groups have really only participated in one presidential election, in 2012. Several of the Koch donors regret their decision to go all-in for Mitt Romney. Many have said returning to a White House race would be a bad return-on-investment with little appreciable impact on a race with a price tag that tops a billion dollars. Plus, Trump isn’t exactly a natural fit for the understated ultra-rich who band together behind Charles Koch’s agenda.

While there are Trump backers in the group, including prominent Texas donor Doug Deason, most have found other organizations more attuned to Trump’s tone for their explicit presidential giving.

Still, the groups supported by Koch-aligned donors have been shown significant players in politics and policy fights. Backing from the Koch network has proven essential for programs that fight gang violence, criminal recidivism and addiction. Elsewhere, their financial backing has yielded pilot programs for at-risk youth, studies on prisons and faculty appointments across the country. With a honed focus on poverty, allies argue, perhaps the Koch network can partner with other organizations from across the political spectrum to counter the root causes. And later this month, the Koch network plans to release a supplemental curriculum expected to reach 15 million students in elementary and high schools.

Similarly, the Koch network plans a return to the fight over immigration. While Trump has proven himself a hard-liner on immigration, the Koch-minded donors have a differing view, especially when it comes to young people who were brought to the United States illegally as children. The Koch groups plan to make a solution for so-called Dreamers a priority in 2019, meaning House and Senate candidates looking for support in 2020 should consider their stances.

“These are people who have already demonstrated their commitment and contribution to this country – and in 2019 our country can do the same for them,” the Koch network argued in its email.

With hundreds of millions of dollars at the ready, the Koch political muscle may help break the political logjam over the issue.

The original version of this story misstated the Koch network’s goals for 2019. It is pushing for permanent legal status for Dreamers; it is not pushing for immediate citizenship for Dreamers. 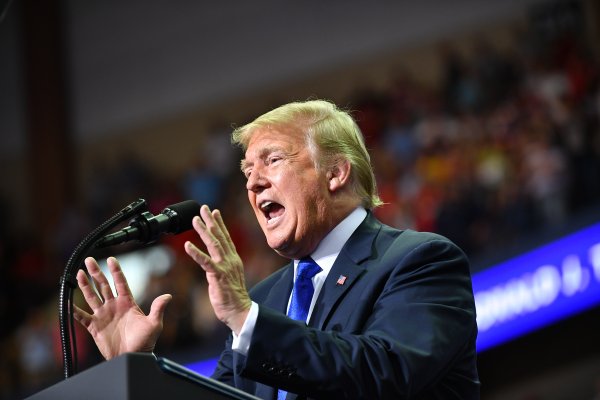 Nearly 430 People Are Running Against Trump in 2020
Next Up: Editor's Pick