This Wednesday, Dec. 26, 2018 image from a surveillance camera video shows a suspect police are searching for in connection to the fatal shooting of an officer during a traffic stop in Northern California.
Stanislaus County Sheriff's Department—AP
By Gina Martinez

The man suspected of shooting and killing a California police officer during a traffic stop early Wednesday morning has been arrested after a statewide manhunt, authorities confirmed on Friday.

Stanislaus County Sheriff Adam Christianson confirmed Gustavo Perez Arriaga, 33, was taken into custody after he was found in a home in Bakersfield, Calif. earlier Friday.

Cpl. Ronil Singh, 33, was shot and killed early Wednesday morning, shortly after he radioed in that he was pulling over a gray pickup truck with no license plates in the small town of Newman, Calif., according to the Associated Press. Newman is located about 100 miles southeast of San Francisco.

“He’s not coming back but there’s a lot of people out there that misses him,” he said.

Christianson said Arriaga entered the country illegally, has two prior arrests for DUI and has known gang affiliations. Christianson first announced Thursday that the suspect was an undocumented immigrant.

According to the Modesto Bee, Christianson met with President Trump in May at the White House to discuss immigration and sanctuary laws. During the meeting, Christianson thanked Trump for “being a defender of the rule of law, and for your overwhelming support of public safety, and for standing with the men and women who put their lives on the line every day.”

Christianson also announced that two other men, Adrian Virgen, 25, Erik Razo Quiroz, 27, were arrested Thursday for helping Arriaga escape after he allegedly shot and killed Cpl. Singh. Police said Virgen was arrested in Hanford, Calif. and Quiroz was arrested in Modesto, Calif. Both men were charged with accessory after the fact to a felony.

“He doesn’t belong here, he is a criminal,” Christianson said during a press conference Thursday while they were still searching for Arriaga.

After Thursday’s press conference, President Trump weighed in on the manhunt on Twitter, using it to back his argument for the border wall, which many experts agree is not an effective deterrent for migrants looking to enter the U.S. According to multiple studies, undocumented immigrants do not statistically commit crimes at higher rates than Americans citizens or those who enter the country legally.

Newman Police Chief Randy Richardson fought back tears on Thursday as he remembered Singh, a Fiji native whom Richardson said came to the United States for the sole purpose of becoming a police officer. Singh joined the force in 2011 and was one of just 12 members of the Newman Police Department. He is survived by his wife and 5-month-old son. 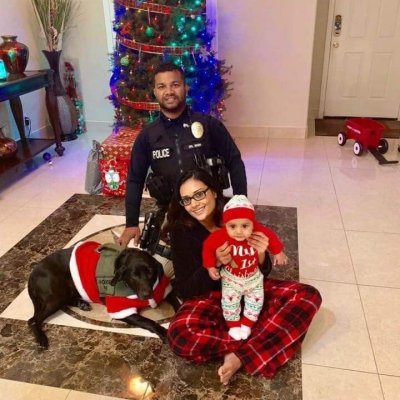 Authorities: Man Accused of Killing Officer Is Undocumented
Next Up: Editor's Pick