A Frenchman has set sail across the Atlantic Ocean in a bright orange barrel.

Jean-Jacques Savin, 71, embarked on his journey from the Canary Islands on Wednesday with the aim of reaching the Caribbean by March’s end, AFP reports. He hopes to make it to the Caribbean by relying on the ocean’s currents alone to transport his barrel.

“The weather’s great,” Savin told AFP after he set off into the Atlantic. He said he was traveling at “two or three kilometers an hour.”

An orange barrel-shaped capsule Savin built himself is carrying the adventurer across the ocean. AFP reports the vessel is built from plywood coated with resin to resist waves and possible orca whale attacks.

Savin has equipped the inside of the barrel with a kitchen, sleeping bunk and storage space. To celebrate New Year’s Eve, Savin has stored on board a block of foie gras and a bottle of Sauternes white wine. For his 72nd birthday on Jan. 14, Savin has tucked away a bottle of red Saint-Emilion, according to AFP.

Savin told AFP he hopes he can rely on ocean currents to take him to the Caribbean naturally, without using oars or sails. He said he would ideally land in Barbados, “although I’d really like it to be a French island like Martinique or Guadeloupe.”

A crowdfunding campaign and various sponsorships are funding Savin’s trip and people can keep track of the journey on a Facebook page. 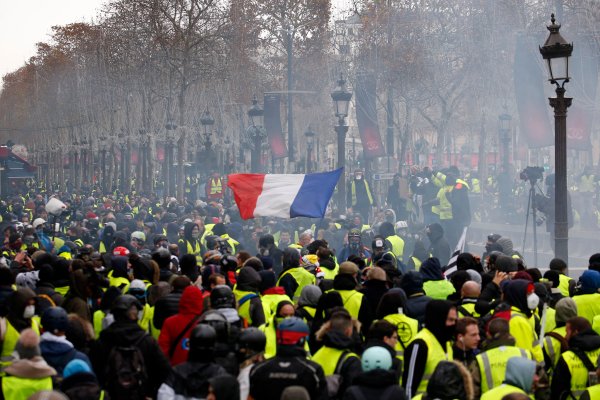