From inside a dun-colored, domed tent on Al Asad Air Base in western Iraq, President Donald Trump answered reporter’s questions on Wednesday in front of senior U.S. military officials, outlining his strategy in the region. The remarks seemed, at times, to have been spoken by two different presidents.

Trump began by laying out that he had “no plans at all” to reduce the substantial U.S. presence in Iraq and underscored his willingness to launch more military operations in the future. “We could use this as a base if we wanted to do something in Syria,” the President said. “If – I will say this, if you take ISIS and if we see something happening with ISIS that we don’t like, we can hit them so fast and so hard, they won’t – they really won’t know what the hell happened.”

But nearly in the same breath, Trump’s hawkish tone seemed to wilt. “It’s time to get our soldiers out, and it’s time to get our young people out,” Trump said, sitting next to military leaders and advisors. “The United States cannot continue to be the policeman of the world,” he repeated to reporters, describing a long-term vision of detached isolationism embodied by his controversial decision last week to pull thousands of U.S. troops from Syria and Afghanistan.

Trump’s waffling over strategy in the Middle East is partly a reflection of his own chaotic style of leadership. But it’s also an indication of a deeper contradiction endemic to the Republican foreign policy establishment, which has long attempted to balance the two strands of its DNA: America First isolationism and neocon interventionism. In his first-ever visit to troops in a combat zone, Trump seemed to present a foreign policy doctrine that champions a perhaps untenable middle ground. Call it hawkish isolationism.

In some ways, Trump’s embrace of a contradictory position isn’t surprising. Throughout his first two years in office, Trump has made a habit of advancing apparently conflicting stances. Trump’s tax reform bill, which he sold as a boon to the middle class, overwhelmingly benefitted the very wealthy, and despite promising to protect people with preexisting health conditions, Trump’s Justice Department has systematically undermined the health care bill that does just that.

In the realm of trade, Trump has repeatedly demanded that China reverse decades of unfair trading practices, while simultaneously undermining international institutions, like the World Trade Organization, designed to curb precisely such abuses. And in U.S. relations with Russia, Trump has resisted senators’ demands to punish Russian President Vladimir Putin and condemn Russian intervention in Ukraine, while succumbing to political pressure to sign sanctions against the nation.

The civil war within Trump’s foreign policy played out in real time this week. In Iraq on Wednesday, Trump seemed willing to reengage militarily in Syria, using U.S. forces stationed on Iraqi territory. But less than a week earlier, Trump had embraced a nearly opposite position, issuing a powerful order—against the advice of his top military and civilian advisers—to withdraw more than 2,000 U.S. troops from Syria within 30 days, and 7,000 from Afghanistan.

The decision blindsided Congress, terrified U.S. allies on the ground, and led to the abrupt resignations of both Defense Secretary James Mattis and the top State Department official managing the fight against Islamic State, Brett McGurk. John Bolton, Trump’s neoconservative national security advisor, who sat a few feet from the President as he spoke in Iraq, had disapproved of the decision.

Trump’s visit to Iraq did not clarify his administration’s position in the Middle East so much as underscore his apparently competing desires to both withdraw from the world and to project military power and strength.

“The men and women stationed at Al Asad have played a vital role in the military defeat of ISIS in Iraq and Syria,” Trump said inside a hangar in Iraq, earning cheers from a crowd of uniformed troops gathered to hear his remarks. “Because of these gains, our service members in Syria can now return home to their families,” Trump said. Some troops leaving Syria will come to Al Asad “for a stay,” he added. He described the U.S. victory over ISIS as nearly complete.

But, later, aboard Air Force One, White House Press Secretary Sanders suggested that Trump was still planning a pitched fight. The President and military leaders had “come up with a powerful plan,” she told reporters, “that will allow us to continue on a path to total victory.” 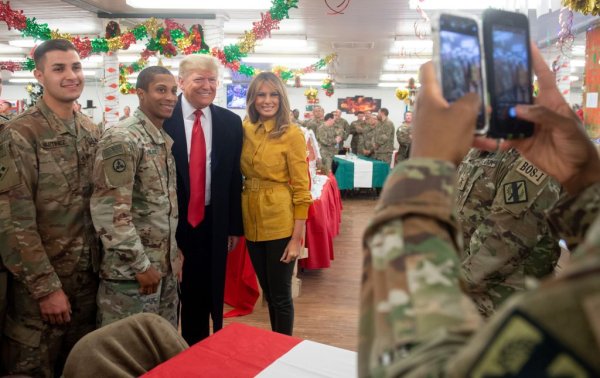 Trump's Surprise Visit to Iraq
Next Up: Editor's Pick