A video of a white man demanding what his black neighbor is doing in the lobby of his own New York City apartment building has become the latest racially-charged incident to become viral online.

Chika Okafor and a friend, Cassius Flemming, were caught off guard when they were approached by an unfamiliar white man waiting for a Lyft ride in the lobby of Okafor’s apartment building on the city’s Upper East Side.

The confrontation mirrors past viral videos, which feature white people (usually given nicknames like Permit Patty and Cornerstore Caroline) who demand to know what black people are doing their space.

In the new video, the unidentified white man claims that he has lived in the building for 27 years but has never seen Okafor or Flemming.

“What are you doing in my building? You don’t live here,” the man repeatedly says, ignoring Okafor’s insistence that he lived in the building.

Okafar and Flemming managed to keep their cool and walked out to catch their Lyft. In the days since, the clip has been viewed more than 1.4 million times.

Okafor told the Times that he had lived in the building for a year, but had never encountered the man before. He said that he had not called the police, but had reported the man’s behavior to building management.

He later learned that the man apparently struck again later that night – this time, confronting a white couple who were staying at an Airbnb in the building.

The woman, Janah Reynolds, posted her own video on Facebook, showing the man yelling and telling Reynolds and her husband that they are not allowed the building. After the couple briefly left the apartment where they were staying, he refused to let them back in, Reynolds said.

Reynolds wrote on Facebook that her family left the apartment the next day. 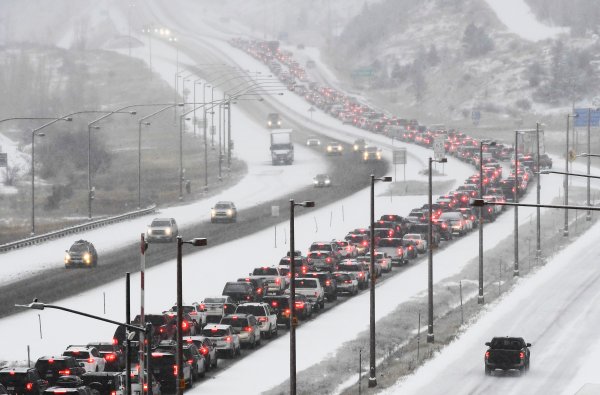 Snow and Rain Across the U.S. Could Impact Post-Christmas Travel for Millions
Next Up: Editor's Pick