US President Donald Trump and First Lady Melania Trump take photos with members of the US military during an unannounced trip to Al Asad Air Base in Iraq on December 26, 2018.
SAUL LOEB—AFP/Getty Images
By Tara Law

President Donald Trump made a surprise visit to U.S. troops in Iraq on Wednesday – his first trip to a combat zone as Commander in Chief.

The President has been criticized since he announced his plan to withdraw all U.S. troops from Syria and for asserting that the Islamic State has been defeated. Speaking to U.S. troops on Wednesday, however, Trump defended the pullout, and said that he does not intend to remove troops from Iraq, according to the Associated Press.

Trump added that President Recept Erdogan of Turkey would finish off “any remnants” of the Islamic State in Syria, and that other nations should take the initiative to rebuild the devastated country.

“The nations of the region must step up and take more responsibility for their future,” Trump said, according to the Associated Press.

President Donald Trump kisses first lady Melania Trump during a hanger rally at Al Asad Air Base, Iraq, on Dec. 26, 2018. President Donald Trump, who is visiting Iraq, says he has 'no plans at all' to remove US troops from the country.
Andrew Harnik—AP/REX/Shutterstock

Trump had also been criticized for not yet visiting troops in a combat zone as president. President Barack Obama and President George W. Bush had already visited combat zones by this point in their presidencies. In November, Trump told Fox News that he has been planning to go, but said he has had an “unbelievably busy schedule” since taking office.

“President Trump and the First Lady traveled to Iraq late on Christmas night to visit with our troops and Senior Military leadership to thank them for their service, their success, and their sacrifice and to wish them a Merry Christmas,” Sanders tweeted.

The visit comes at a particularly divisive moment for the President, who has come under fire for the resignation of widely respected Defense Secretary Jim Mattis and the partial shutdown of the federal government over $5 billion for a border wall.

If Trump had not visited the troops, he would have been the first president in 15 years who didn’t meet with troops at Christmastime, NBC News reported.

On Christmas day, the president also made phone calls to troops on active duty from the White House – but took time to grouse about Democrats, former FBI Director James Comey and the Federal Reserve’s decision to raise interest rates. 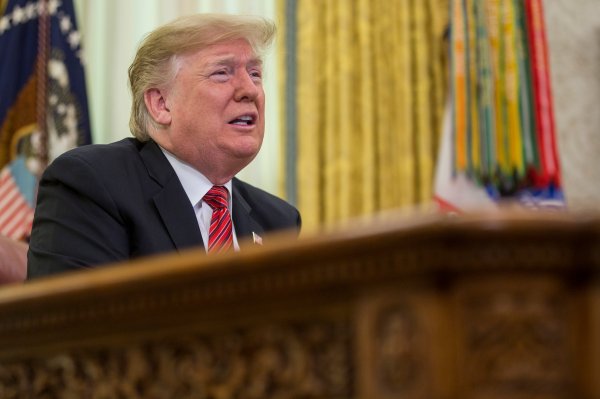 Trump Celebrates Christmas With an Attack on Democrats
Next Up: Editor's Pick