Over the weekend, NASA released radar images of asteroid 2003 SD220 collected through the efforts of the Goldstone Deep Space Communications Complex in California, the National Science Foundation’s Green Bank Telescope in West Virginia and the Arecibo Observatory in Puerto Rico.

The pictures show a flying space rock as it zipped past the Earth at a distance of about 1.8 million miles. While asteroids, comets and meteoroids are frequent sights in the night sky, this particular asteroid stood out from the pack, especially for anyone who spends the holiday season with the song “I Want a Hippopotamus for Christmas” stuck in their head. That’s because thanks to those newly-collected radar images of the asteroid, scientists were able to figure out that near-Earth asteroid 2003 SD220 bears an uncanny similarity to an animal usually spotted in zoos or lurking in the rivers of sub-Saharan Africa. Specifically, according to the great minds at NASA, it resembles a “hippopotamus wading in a river.”

“The radar images achieve an unprecedented level of detail and are comparable to those obtained from a spacecraft flyby,” said NASA scientist Lance Benner.

If you want to see the space hippo for yourself, you’ll have to wait awhile. Saturday was the asteroid’s closest approach to Earth in more than 400 years, a proximity that won’t be repeated until 2070, when the hippo-looking asteroid will be slightly closer to our planet. Be sure to tell your grandchildren about the Christmas space hippo now, so they are ready for it by 2070. 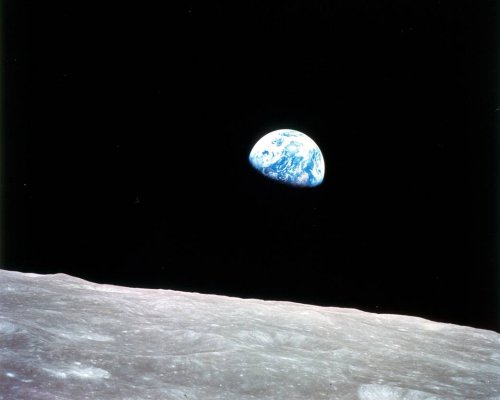 Apollo 8’s ‘Earthrise’ Photo Changed Our Understanding of Our Place in the Universe. Here’s the Story Behind the Picture
Next Up: Editor's Pick