As Jimmy Kimmel explained in his show on Thursday night, it’s been a big pre-Christmas week for President Donald Trump. “He declared victory against ISIS and he told reporters he won the ‘war on Christmas,’ too,” Kimmel noted of the president’s eventful last few days. In particular, Kimmel wanted to focus on the latter: “Children need to know that this president is fighting for their favorite holiday,” he joked.

With that, Kimmel introduced audiences to a new book called How the Trump Saved Christmas. An illustrated picture book in the style of Dr. Seuss’s How the Grinch Stole Christmas, Kimmel’s satire of Trump’s holiday spirit was filled with pointed rhymes about the president’s proclivities, from his love of all-caps tweeting to his passion for MAGA hats.

“The Trump hated Christmas like he hated Don Lemon, like he hates Robert Mueller and people in Yemen,” Kimmel read. “No one quite knows why he’s mad this whole season; his dad didn’t love him — that could be a reason.”

Kimmel breezed through mentions of his disagreements with fellow politicians like Nancy Pelosi to his frequent appearances on Fox and Friends. “And that’s how the Trump saved Christmas for all, from the American heartland to the Mexican wall,” he concluded.

So, no, this isn’t exactly a children’s book. But it might bring a smile to some adult faces this holiday season. 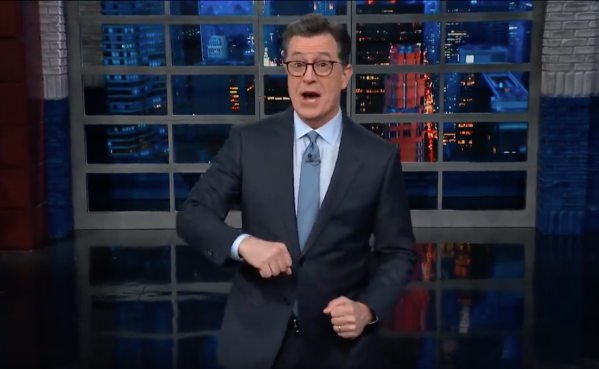 Stephen Colbert Is Convinced This Is the Driving Force Behind Trump
Next Up: Editor's Pick