Nancy Pelosi is having her big meme moment. Images of the Speaker-elect leaving her meeting with the President last week clad in a stylish red coat, cool shades and a slightly exasperated expression have proliferated on the internet. As observers praised Pelosi for her poise in the meeting itself, Max Mara, the company that made that fiery coat, has gone so far as to reissue it. Far from her detractor-fueled image as a controversial, embattled leader, Pelosi has emerged with a renewed image as a competent, tough and deeply experienced legislator who had to explain to the President of the United States how laws are made: “[In] legislating, which is what we do,” she explained, “you begin, you make your point, you state your case.” When Trump then boasted he could easily get the votes for a wall, she immediately called his bluff: “Well, then go do it.” There was an undeniable thrill, especially for those of us tired of seeing women shut down or disregarded by powerful men, in seeing Pelosi go toe-to-toe with Trump and leave with another notch in her belt.

This isn’t to say it’s always a victory lap for Pelosi. Congressional races have used her as a bogeymen for years. “In the final stretch of the 2010 campaign, Pelosi was so toxic to her party that she abstained from campaigning for her fellow Democrats and instead focused on raising money at closed-door fundraisers,” one 2015 profile of her noted. Republicans used the same tactic of tying opponents to Pelosi in 2018—and many Democrats did in fact distance themselves from her—but she never seemed to be bothered, showing an understanding of how electoral politics differ from the politics of intra-party leadership.

Like other powerful political women reborn on the web—be it the Notorious RBG or “texts from Hillary”—Pelosi went viral because of an image that is based in an outward appearance of self-possession and power. But the reason Pelosi inspires women right now—more so than any other stage in her long career—is that her earned confidence predates the Trump era, with its scandals, egos, resignations and fibs, and hopefully will outlast it too. She’s a symbol of endurance and depth, of a certain kind of woman who puts her head down, does the work and gets her task accomplished, even as politics and personalities ebb and flow around her and she faces unending sexism. She told a reporter that early on in her ascension, instead of getting encouragement from party leadership, she got incredulity. “The only time I was ever in the Democratic speaker’s office was when I became speaker,” she said. “When I decided to run, the first thing I heard was: ‘Who said she could run?’” That she ran anyway, believing she was the best person for the job, is part of what makes her a figure of inspiration. And her story sends a message to women across the country, including the thousands who ran for office in 2018, many of whom won: If you want to make change, you may have to stand up and take on the boys.

While I question Pelosi’s close ties to big donors and her bona fides on abortion and #MeToo issues, I was frustrated when Pelosi’s fitness to reclaim the speakership was challenged by centrist Democrats—and some in the more progressive wing freaked out at her early gestures toward bipartisanship. I remember being riveted while watching her wrangling the votes for the Affordable Care Act, and I remember how she stopped the privatization of Social Security under George W. Bush. She’s been getting the votes she needs for a long time. Picturing her with her gavel again offered me one of the first sighs of relief I’ve breathed in ages.

That image of Pelosi in the red coat represents, in the most basic sense, a woman who respects her own skills; it’s a state of being that the many women plagued by imposter syndrome can aspire to. And it’s particularly resonant in this era of unearned male bluster, both from the President and some of his “resistance” opponents like Michael Avenatti. Pelosi’s swagger, with statements like “I’m a master legislator” and her “100%” assurance that she would win the gavel, were backed up by results. In a 2017 press conference, she derided the failure of a House vote promised by Republicans to repeal Obamacare as “a rookie’s error.” This was not posturing or a Twitter insult. It was a great example for women who feel the need to downplay their abilities to make others comfortable that sometimes you’re the one who knows best and have to own it.

The capstone to all this was her demeanor with the President. To many women watching, an obvious point of comparison was another female politician whose pantsuits inspired a massive Facebook group and whose debates with Donald Trump spawned memes and gifs that women still use to express their frustrations. For her legion admirers, Hillary Clinton’s loss, the misogyny she faced, and the ways that her campaign’s fumbles came to undercut her image still sting. It’s satisfying in that context to see someone like Pelosi coming out ahead, even if she will doubtless be up against another round of gendered insults.

Now with a base that’s especially eager to call out double standards, Pelosi is particularly well positioned in 2019. For instance, when the New York Times framed her nomination to the Speakership quite differently than they did Paul Ryan’s, even though Ryan won with fewer votes, people took notice.

It’s tempting to draw a contrast between Pelosi, a long-entrenched politician who must unite a large and fractious caucus, and the new group of progressive women coming to Congress next year, elected largely on their promise to push the boundaries of what agenda Congress considers. But to focus on their differences is to ignore how much they have in common and how much Pelosi has paved their way—and women are smart enough to understand that it’s possible to admire both of them, it doesn’t have to be one or the other. Watching Alexandria Ocasio-Cortez refuse to yield the power she brings to her new job while shooting down sexist attacks intended to undermine her right to be there is thrilling, but it’s also pretty exciting to watch a woman who’s been doing this for decades directly remind the President of the strength she brings to an Oval Office meeting, then confidently step out of the White House in the coat memed round the world. 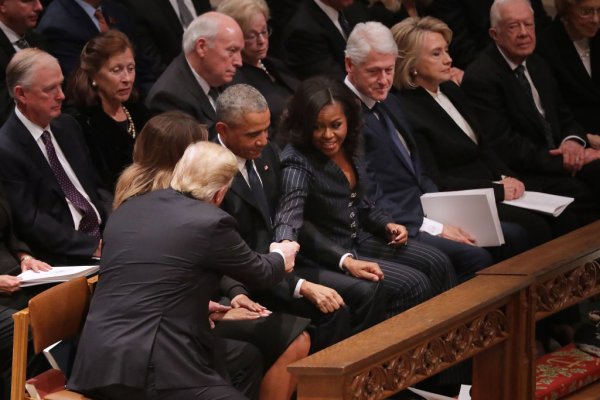 Michelle Obama on How Their 'Refreshing' Tradition Shows 'the Beauty of George Bush'
Next Up: Editor's Pick