Nearly six months after they were dramatically rescued from a flooded cave in northern Thailand, the Wild Boars soccer team has a message for the thousands of people who helped save them: “Thank you.”

TIME spent a day with the 12 boys and their assistant coach in early December, and they said they have recovered and are ready to give back. Their parents have launched the Wild Boars Education Fund to raise money for all of the team’s members to complete their education so they will be better equipped to help others in need.

“We are so touched by your kindness,” says 13-year-old Phanumat Saengdee, who goes by the nickname Mix. “I want to be strong and capable when I grow up, so that I will be able to help a lot of people.”

The boys, all between the ages of 12 and 16, and their coach live in the small town of Mae Sai, near the Myanmar border. Some are from poor migrant families — four of them were stateless until Thai authorities granted them citizenship after their ordeal — and several belong to ethnic minority groups. With interests ranging from art to science to zoology, they aspire to go to college in larger cities while they pursue their dream of becoming professional soccer players.

Read More: From Cave Divers to a Fearless Flier, Here Are the Heroes of 2018

There are also several organizations working to support the disadvantaged in Thailand. ADRA Thailand, a country office of the U.S.-based humanitarian network Adventist Development and Relief Agency, partners with the U.N. refugee agency to assist stateless people, while The Border Consortium provides food, shelter and camp management support for 90,000 refugees from Myanmar who remain in nine camps spread along Thailand’s border.

“We received help from so many people, in the future we want to be strong enough to help others in return, just like they helped us,” says Adul Sam-on, 14, who himself migrated from eastern Myanmar’s Wa State so he could get a better education in Thailand. Adul, who speaks four languages, was the only member of the team who could communicate with divers in English when they were discovered on a rocky ledge in July after nine days in the dark. It took rescuers another nine days to get them all out.

“I’m humbled and grateful for everyone’s care and support,” says 13-year-old teammate Mongkul Boonpiem, nicknamed Mark. “Thank you very much. I will do my best to help people when I grow up.” 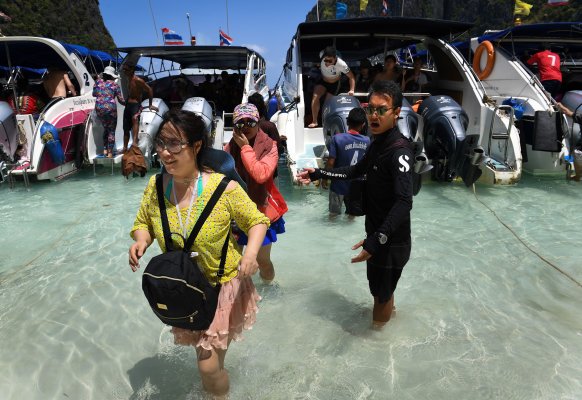