He Faked His Own Death to Save His Life. Did He Discredit His Profession By Doing So?

Arkady Babchenko, the Russian journalist now living in exile in Ukraine, spent the strangest night of his life in a morgue this spring. His face still crusted in the makeup that police had used to make him look dead, Babchenko watched his friends reacting on Facebook to the news of his gruesome murder.

That news broke on the night of May 29, and it ricocheted around the world in minutes, along with a picture of Babchenko lying face down in a pool of blood. In reality, it was only pig’s blood. The murder had been staged by the Ukrainian secret police, whose agents had convinced Babchenko that this stunt was necessary, an essential part of a sting operation to catch the (allegedly very real) assassins who had been sent from Russia to kill him.

To many of Babchenko’s friends and colleagues, the whole thing seemed utterly bizarre and, at the same time, bizarrely appropriate to this moment in history – a macabre reflection of our era’s debates about facts, fakes and the journalist’s duty to tell the difference.

Looking back on that experience on a recent night in Kiev, Babchenko says the hardest part was not the time he spent with those security officers – about a month, he says – preparing to fake his own death. Nor was it the cascade of emotions – embarrassment, relief, anger, to name a few – that he felt when he appeared at a press conference on May 30, the day after his supposed murder, and showed the world with an awkward smile that he was very much alive. The hardest part was his role in the debate that followed, a debate that made him feel like an outcast among many of his closest friends.

Among the central questions of that debate was this one: Exactly how inviolable is a journalist’s commitment to the truth? Should Babchenko have been willing – as he had already been so many times while reporting from war zones in Georgia and Ukraine – to sacrifice his life for it? Or was he justified in deceiving the public in order to save his own skin? In other words, as a reporter, was it his duty to find some other way to stay alive, one that would not have required him to produce a piece of fake news so sensational, and so believable, that it risked discrediting not only him but his entire profession?

“It’s an idiotic question,” Babchenko says, his voice growing annoyed at having to answer it for the umpteenth time. “Imagine, somebody from the security services comes to you and says, ‘Dude, you’ve got a price on your head.’ … You don’t think about whether it’s true. You just think that your time is up.” Later in his interview with TIME, he added, “At that point, the ethical norms of journalism are roughly in 25th place on the list of your concerns. Your first concern is your life, because you want to stay alive.”

Arkady Babchenko spent years as a Russian war correspondent, leaving for Kiev in 2017 after his criticism of the Kremlin led to threats against him. Last spring, when Ukraine’s intelligence agency warned of a plot to assassinate him, he faked his own death in a sting operation designed to catch the people paying for the murders—a controversial move in the journalism world.
Moises Saman—Magnum Photos for TIME

It’s a fair point, and Babchenko clearly had good reason to believe that his life was in danger. The Russian newspaper where he worked for much of his career, an investigative powerhouse called Novaya Gazeta, has seen five of its reporters murdered since President Vladimir Putin came to power in 2000, according to the New York-based Committee to Protect Journalists.

Babchenko says he knew most of those reporters personally. And it was easy enough to imagine how his dispatches from the front lines in eastern Ukraine over the past few years could have angered some of the powerful people in Moscow who fueled that war since it started in 2014. That was, after all, why he fled Russia and settled in Ukraine last year: he was facing physical threats and the constant risk of being detained on one of the charges the Kremlin uses to lock up its critics, like the infamous catchall – Article 282: Extremism.

Besides, it was not far-fetched to believe that the Kremlin had dispatched assassins to Ukraine. The British authorities have publicly accused Russia of doing just that in the murder of the ex-spy Alexander Litvinenko in London in 2006. Closer to home for Babchenko, two of Putin’s prominent critics had been murdered in broad daylight in Kiev during the previous two years: the journalist Pavel Sheremet in a car bombing in July 2016, and Denis Voronenkov, a former member of the Russian parliament, in a curbside shooting in March of last year. Ukraine’s main security service, the SBU, claimed that both of those murders were ordered in Moscow.

But as Babchenko must have known from his years of reporting, the SBU was not an entirely reliable source. Since the war between Russia and Ukraine broke out, its officers have been accused of human rights violations, including torture, kidnapping and attempts to silence independent journalists, according to a series of damning reports from the United Nations,Amnesty International andHuman Rights Watch.

This record of alleged abuse is partly what drove Babchenko’s colleagues to question his decision to work with the SBU. There were also deeper concerns, related to his duties as a journalist. Christophe Deloire, the head of the international advocacy group Reporters Without Borders, expressed “sharp indignation” at what he called a “manipulation carried out as part of an information war.”

But for Babchenko, the most painful of these condemnations came from his own colleagues at Novaya Gazeta in Moscow. “It is clear,” wrote his old friend from the newspaper, Pavel Kanygin, “that the date of May 30, 2018, will not only enter history as another date of birth for Arkady Babchenko, but as the end of journalism in its traditional form.” Later in the piece, published on May 31, Kanygin wrote: “We have all died as journalists, and Arkady has simply marked the start of a new and fairly repulsive era in our profession, one in which even the confirmation of a person’s death will be subject to doubt, and will become part of a spectacle barely discernible from reality.”

It took Babchenko many weeks, he says, to recover from the shock of that rejection, which came on top of the trauma of his self-styled resurrection. “For two months I couldn’t do anything at all,” he says. “Absolutely nothing. I was just coming to my senses.”

It has taken him even longer to adjust to the realities of his new life. Because the Ukrainian authorities believe he is still at risk of assassination, at least two bodyguards from the SBU follow him wherever he goes. He is forbidden from going out to eat or to take a walk in the park with his family. Even his closest friends do not know the address of the safe house where he lives.

Once a week, his bodyguards bring him to the studios of ATR, a small Ukrainian television channel, where he films a rambling call-in show about Russian current events and the effect of Kremlin propaganda.

The purpose of the show, he says, is to expose how “Russia has gone insane” – a view that does not leave much room in his mind for thoughts of journalistic balance and objectivity. That much is clear from the show’s trademark, a massive screen behind Babchenko that shows a looping image of the Kremlin in flames. “The main goal of a journalist is to call things by their names,” he says when asked about the hatred he spouts on air toward what he calls his former homeland. “When you do that, the rest falls into place,” he says.

During a recent broadcast, aired a few days after a naval skirmish in which Russia attacked and seized several Ukrainian warships and about two dozen sailors in the Sea of Azov, a woman called into Babchenko’s show from the region of Crimea, which Russia occupied and annexed at the start of the war in 2014. “Thank you,” the woman’s voice said in a rushed falsetto over a crackling telephone line. “We watch you here in Crimea. Thank you,” she said, and hung up. 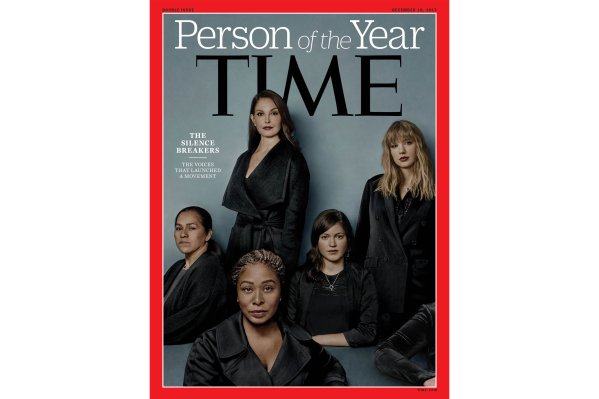 What Still Needs to Be Done to Break the Silence Surrounding Sexual Harassment
Next Up: Editor's Pick