Whether it’s to J.R.R. Tolkien’s Middle-earth or Homer’s ancient Greece, the best fantasy books can take readers on journeys to faraway lands. This year, fantasy bookworms got to travel to a variety of imaginary realms, including war-torn kingdoms and magically industrialized cities, in some of the top fantasy books of 2018.

Described as “Black Panther with magic” by its author, Children of Blood and Bone chronicles teen diviner Zélie’s quest to bring magic back to the nation of Orïsha after her mother and the rest of the maji are murdered on orders of the king. Tomi Adeyemi’s West African-inspired fantasy debut is a powerful rumination on race and social justice that Adeyemi told The Huffington Post she was motivated to write after seeing racist reactions to the casting of actors of color in The Hunger Games movies. Children of Blood and Bone was also featured on TIME’s list of the best YA and children’s books of 2018.

Inspired by the turbulent history of 20th century China — a time period characterized by revolution and war — R.F. Kuang’s ambitious debut novel draws on an era worth charting. The historical military fantasy — the first in a trilogy — centers on Rin, an impoverished orphan who escapes a life of servitude by acing a test designed to identify the Nikara Empire’s most talented youth and earning a spot at an elite but brutal military academy. But her problems are far from over once she arrives at school. Not only does she have to contend with hostile rival classmates who ridicule her for her darker skin and gender, but she also must learn to master her newfound powers in the art of shamanism — the ability to act as a conduit for the gods — as war looms on the horizon.

The story of Aelin Galathynius — formerly known as assassin Celaena Sardothien — and her valiant companions’ quest to save the kingdom of Erilea from annihilation under the evil reign of Valg king Erawan comes to a thrilling conclusion in the eighth and final installment of internationally popular YA author Sarah J. Maas’ bestselling Throne of Glass novels. With a twisting and turning plot that ultimately leads its expansive cast of characters to a long-fated collision, Kingdom of Ash is a worthy finale to one of the best fantasy book series of the past decade.

The sorceress known for turning men into beasts in Homer’s Odyssey shares her side of the story through this powerful feminist retelling of an ancient Greek myth. As a woman living alone in a world ruled by men, Circe must rely on her own resilience — and talent for witchcraft — to survive as she passes an eternity in the murky gray space between humanity and divinity. Madeline Miller’s bestselling follow-up to her 2011 debut, The Song of Achilles, is not only one of the best fantasy books of 2018, but also one of TIME’s picks for the best fiction books of the year.

The illegitimate daughter of an imperial governor of the Ambhan Empire and an exiled Amrithi woman — a member of a race of nomads persecuted for the magic in their blood — finds herself at the center of a deadly struggle for power after the emperor and his cohort of mystics discover she has inherited her mother’s abilities to compel the dreams of sleeping gods. Tasha Suri draws on the history of persecution and power in India’s Mughal Empire for an epic debut that has earned enthusiastic acclaim as one of the best new fantasy books of the year.

The award-winning author of Uprooted turns her attention to the magical realm of fairy tales in a fresh retelling of the Brothers Grimm’s Rumpelstiltskin. With her family in dire straits, Miryem, the daughter of an ineffectual moneylender, sets out to collect the debts he is owed herself. But when the nameless king of winter hears of her talent for turning silver into gold, he calls upon her to complete an impossible challenge. If she succeeds, he promises to make her his queen. But should she fail, he will turn her to ice.

In the city of Tevanne, a form of magic called scriving — using a coded alphabet to imbue everyday objects with sentience — has been industrialized to the point that society has become an extreme capitalist dystopia. So when master thief Sancia Grado is sent to steal a golden key that, unbeknownst to her, has the power to effectively remake the world, she finds herself on a crash course to the most dangerous heist of her life. Foundryside is the first in acclaimed Divine Cities author Robert Jackson’s Bennett’s new sci-fi fantasy series, Founders.

The Fall of Gondolin, J.R.R. Tolkien and Christopher Tolkien

The Fall of Gondolin JRR Tolkien

As the last of the three “Great Tales” of the Elder Days of Middle-earth, The Fall of Gondolin marks what J.R.R. Tolkien’s son, Christopher Tolkien, has said will “indubitably” be the final book that he compiles from his late father’s writing. Completing the loose trilogy of 2007’s The Children of Húrin and 2017’s Beren and Lúthien, Gondolin follows the man Tuor as he journeys to and makes a life for himself in Gondolin, an elvish city that has remained hidden from the dark lord Morgoth for nearly 400 years. That is, until it’s betrayed by one of its own. The collection contains several versions of the story, a precursor to The Lord of the Rings that, according to his son, Tolkien felt he never perfected.

Buy now: The Fall of Gondolin

When Jasminda, an orphan outcast for the color of her skin and her healing gift of Earthsong, learns that the magical veil separating the kingdoms of Elsira and Lagrimar has begun to weaken, she must join forces with Elsiran spy Jack to unravel an ancient mystery and give her homeland a chance of survival. L. Penelope’s first installment in the Earthsinger Chronicles is a master class in fantasy world-building.

From the bestselling author of The Southern Vampire Mysteries, the literary inspiration for HBO’s True Blood, comes a new female-led thriller centered on a young gunslinger who is hired to track down a descendant of Rasputin. Set in a lawless alternate America where Franklin Roosevelt was assassinated before he could be sworn into office, An Easy Death is the alluringly gritty opener of Charlaine Harris’ new Gunnie Rose series, fantasy books for adults. 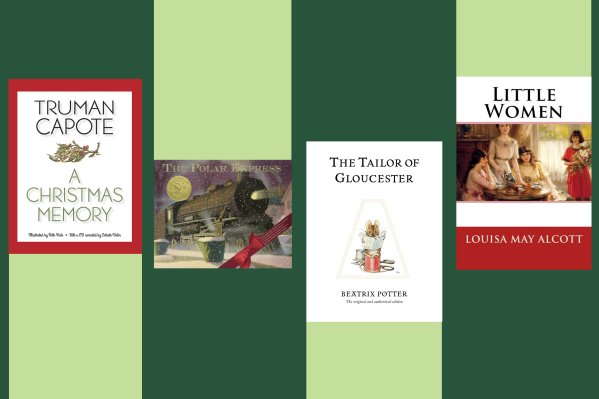 The 16 Best Christmas Books to Read This Holiday Season
Next Up: Editor's Pick