Author James Baldwin on the cover of TIME's May 17, 1963, issue.
Boris Chaliapin
By Olivia B. Waxman

History changed around James Baldwin, but the glaring contradiction in American life that he so often highlighted still lurks within it. The author’s work argued that white Americans who boast of the United States as a nation of freedom can only do so by glossing over, to some degree, its history of slavery, as well as myriad other injustices experienced by minority groups of all kinds. In his lesser-known 1974 novel If Beale Street Could Talk, which arrives in theaters Friday with a film adaptation from Academy Award-winning director Barry Jenkins, insidious injustices are an inescapable part of everyday life — a truth the personal experience of which shaped Baldwin’s writing, propelling his evolution into a major voice for civil rights.

Born in Harlem in New York City on Aug. 2, 1924, Baldwin had one of his first political awakenings facing racism in the early 1940s at a restaurant in New Jersey, where he got a defense-related track-laying job during World War II. As the story goes, when a waitress told him the restaurant didn’t serve African Americans, he threw a glass at her. He felt “ready to commit murder,” as he later wrote in the 1955 anthology Notes of a Native Son, and thought he had to get out before he either killed someone or got himself killed. After that incident, he moved to Greenwich Village and began working in a restaurant and writing, then moved to Paris in 1948.

“Before he went to Paris, he had started to establish himself as a book reviewer, but he didn’t establish that prophetic voice until later,” says David Leeming, who worked for Baldwin and wrote James Baldwin: A Biography.

He would spend the rest of his life splitting his time between the United States and France. In Paris, he wrote Go Tell It On the Mountain — a semi-autobiographical 1953 novel about his stepfather, a stern preacher — and Giovanni’s Room, a novel that takes place within a circle of Parisian gay life, in 1956. He began to get more recognition among the general population for his critiques of American history, such as his 1955 anthology Notes of a Native Son, in which he wrote: “At the root of the American Negro problem is the necessity of the American white man to find a way of living with the Negro in order to be able to live with himself. And the history of this problem can be reduced to the means used by Americans — lynch law and law, segregation and legal acceptance, terrorization and concession — either to come to terms with this necessity, or to find a way around it, or (most usually) to find a way of doing both these things at once.”

While his career was already developing, there was one incident in that period that he would later single out as a starting point for his identity as a voice on civil rights.

On Sept. 4, 1957, white mobs spit on 15-year-old Dorothy Counts as she entered a newly-integrated school in Charlotte, N.C. Seeing news coverage of what happened to Counts compelled Baldwin to return to the U.S. to as a writer and activist. He repeatedly challenged white Americans to look inward, arguing in his 1961 anthology Nobody Knows My Name that the nation would not allow black people “to starve, to grow bitter, and to die in ghettos” if not driven by a fear that had nothing to do with the people who had to live with its consequences. He became even more famous as a spokesperson for the civil rights movement with a New Yorker essay that became the 1963 book The Fire Next Time, seeming to foreshadow 1960s race riots with its title, which was derived from a line in a spiritual in which God promises Noah that next time humanity will be punished for sin not with flood but with fire. Baldwin reiterated his belief that “the Negro problem” wouldn’t exist if white people truly learned to “love themselves and each other” — and made clear the terrible consequences that could follow if that didn’t happen.

With the publication of this essay, “he was suddenly recognized as an American novelist, not just a Negro novelist,” says Rich Blint, an expert on Baldwin and professor of Literature at the Eugene Lang College of Liberal Arts at The New School.

The year 1963 was a turning point in the civil rights movement, and by that point Baldwin was at the height of his career and at the center of it all.

He was in the middle of a speaking tour for the Congress of Racial Equality (CORE) when he appeared on the cover of the May 17, 1963, issue of TIME right after school walkouts turned violent in Birmingham, Ala. Televised images of African-American children getting hosed down and attacked by police dogs, combined with the deadly 16th Street Baptist Church bombing in the fall, are considered to be catalysts for the Civil Rights Act of 1964. “Spring 1963 will long be remembered as the time when the U.S. Negro’s revolution for equality exploded on all fronts,” TIME wrote the next month, following Attorney General Bobby Kennedy’s meeting with a group of African-American literati, which was organized by James Baldwin. “After the spring of 1963, there can be no turning back.”

And yet, that revolution didn’t lead to as much change as Baldwin had hoped for. From the late ’60s until his death on Dec. 1, 1987, at the age of 63, his writing would reflect his increasing frustration and disappointment that the nation had yet to fulfill the promise of full equality for people of all races and sexual orientations.

The assassinations of Medgar Evers in 1963, Malcolm X in 1965, and Bobby Kennedy and Martin Luther King, Jr. in 1968 “broke him,” says Blint. (In the 1972 anthology No Name in The Street, Baldwin recalls a postal clerk friend asking him if he could have the suit that Baldwin wore to Martin Luther King’s funeral after reading in a gossip column that the author vowed never to wear the suit again. Baldwin personally delivered it to him and stayed for dinner.) He attempted suicide at least four times throughout his life.

“Watching all of these men being snuffed out one by one really, really depressed him,” Blint says. “How much longer do we want to wait for a certain type of progress?”

It was in this later period that he wrote If Beale Street Could Talk, which reflects many of the often invisible, but perhaps even more dangerous, forms of racism that he saw throughout American culture. The novel’s protagonists have trouble finding an apartment because they’re black, and one is hastily locked up for a crime he did not commit — plot points that reflect the period’s concern with housing equality and the beginning of mass incarceration. TIME also saw it as a response to the studies such as the Moynihan Report, which made headline news of the state of vulnerable African-American families. “Possibly Baldwin, who now lives in France, took to long fiction for the first time in six years out of disgust with the slag heaps of sociology about blacks,” the magazine wrote in its original 1974 book review. “Such studies often go on about the instability of the black family; the [family in the novel is] both strong and united.” (The review also argued that the story would be more compelling staged, foreshadowing Jenkins’ film adaption: “As a novel it is not a success, being too sentimental and predictable by half. But it has the makings of a splendid opera.”)

While Baldwin is no longer alive, his writing is — from the 2016 Oscar-nominated documentary I Am Not Your Negro to the idea that he can be seen as a Founding Father of the Black Lives Matter movement.

“For people to reach for him in this moment makes all of the sense in the world — a moment of profound crisis, when the nation has to answer the question, Who are we?” says Eddie S. Glaude, a TIME columnist and Professor of Religion and African American Studies at Princeton University, who is writing a book about Baldwin.

And after all he lived through, perhaps that would not surprise Baldwin himself. “Each generation is promised,” he wrote in Notes of a Native Son, “more than it will get: which creates, in each generation, a furious, bewildered rage.” 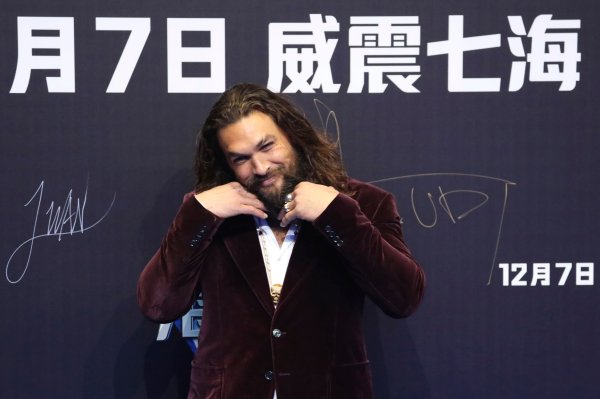 Sit Down and Witness Jason Momoa Lead a Haka on the Red Carpet
Next Up: Editor's Pick