One year after TIME named us the Person of the Year as the Silence Breakers, we are all still fighting. Our silence-breaking cost us jobs, professional opportunities, careers and, for some, our savings on legal fees. The public awareness of the injustices has reversed none of those pains. Yet not one of us regrets our decision to speak out.

TIME’s acknowledgment was an unexpected moment in the spotlight that brought us together and connected us with those who are struggling in the same way. We bonded despite differences in our careers, backgrounds and geography because of the commonalities in the problems we faced across our respective industries while fighting against abuses of power. We have watched in awe as individuals continue to come forward at great personal risk simply to call out injustice, from our own colleagues and students to the courageous Dr. Christine Blasey Ford. Simply by speaking, these people have already improved the world far more than their abusers ever could have. And contrary to expectations, the movement shows no signs of petering out. In fact, it has only just begun.

While it has now become common to hear public accusations of abuse and misconduct, the movement has yet to achieve its most important goal of true accountability. Behind every Weinstein, Moonves, Cosby or Nassar, there is an entourage of enablers and those who chose to remain complicit. Some of them looked the other way, priding themselves on staying out of other people’s “business,” no matter how ugly it became. Some enablers bent to self-interests because their own reputations and careers were tied to powerful people who behaved egregiously. Some of them even encouraged or took part in this behavior — Who would ever have thought they could be caught? — and are lucky today to remain unnamed. Some are CEOs, managers, producers, publishers, college presidents, deans, trustees, human-resources representatives or investigators in university Title IX offices. Behind an abuser, there is often an entire institution that lacks the moral courage to find fault.

Too often, leaders within institutions say they support feminist ideas but don’t actually do the difficult work of real change. No leader of an organization who fails to create structures and incentives that protect its most vulnerable members should be left in charge. No person in a position of leadership who looks the other way should be in a powerful position that others might depend on. Did leadership create or permit an unsafe working environment? Just as there are regulations protecting workers’ occupational safety and health, the careers of those subjected to sexual harassment should be protected and defended. When companies, schools and organizations have positions in which people are expected to render ethical judgements, then a failure to do so even in a single case must be grounds for removal. That is what it means to take seriously the issues that motivated the #MeToo movement.

This kind of deep accountability requires us to go beyond our instinct to rage at those who most directly caused harm. In the media’s eye, a quick resignation or apology is considered a fix that takes pressure off the organization. But in fact, a resignation should be the starting point for a meaningful investigation into understanding how, why and when the abuse began, and who is responsible for letting malignancy persist. And then, whoever is responsible must face consequences.

The reality is that, although we’ve witnessed spectacular media attention to the cause, we await structural progress. It’s hard not to remember survivor Kaylee Lorincz’s plea to Larry Nassar at his sentencing: “I only hope when you get a chance to speak, you tell us who knew what and when they knew it … If you truly want us to heal, you will do this for us.” True to form, Nassar refused.

Finding those who covered up is less immediate than firing the offender, but it is vastly more important to address the structural, bureaucratic and systemic problems that lead to the creation of abuse. Breaking the silence isn’t really about calling out high-profile abusers, but rather fixing the systems of power that let these people flourish. We need relentless accountability to create enduring change. 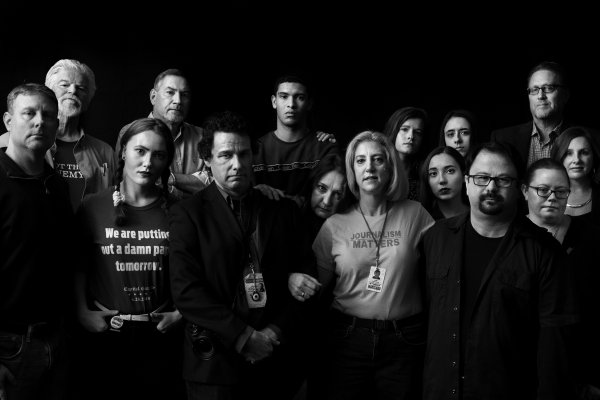 'I Hate Being the Story.' The Capital Gazette Reflects on Life After a Newsroom Shooting
Next Up: Editor's Pick