A supporter of US Senator and former Presidential candidate Bernie Sanders holds up a shirt during his speech at "The People's Summit" in Chicago, June 10, 2017.
JIM YOUNG—AFP/Getty Images
Ideas
By Todd N. Tucker and Marshall Steinbaum
Tucker and Steinbaum are fellows at the Roosevelt Institute.

For progressives across America, 2020 can’t come fast enough. Fresh on the heels of the biggest blue sweep of congressional seats since Watergate, dozens of Democrats are readying potential presidential runs. Mere days after trouncing his Republican opponent in a Senate, Ohio’s Sherrod Brown announced he was “thinking” about a run. Ditto for Beto O’Rourke, who narrowly lost to Texas’ arch-conservative Ted Cruz. Both Elizabeth Warren and Bernie Sanders have given major foreign policy speeches this fall — a common prelude to a presidential campaign. Any of these candidates would likely govern to the left of any recent Democratic presidents.

But American progressives may be thinking too small. While the next U.S. presidential election is a crucial stepping stone, an even bigger year rests on the horizon: 2022. By that time, the major European countries will have had their national elections, and there is a non-trivial chance that progressives could make a clean sweep. The first round of voting in France will take place in April 2022, while the UK’s must happen no later than May 2022. German polls will take place no later than October 2021. In the U.K., the Tories’ unpopular Brexit and “universal credit” policies have boosted Jeremy Corbyn’s Labour Party. In France, the economically marginalized are protesting Emanuel Macron’s austerity measures, giving an opening to Jean-Luc Mélenchon, a socialist who would have come in first in the 2017 elections had his votes not been split with other likeminded candidates. And in Germany, the Green Party made significant gains in local elections last month, while the youth wing of the Social Democrats is pushing their party elders to the left or to the side. And outside of Europe, the Brazilian elections are also scheduled for 2022, while progressive governments are already in place now in Canada, Mexico, and New Zealand.

If the stars align, 2022 could be a once-in-a-century opportunity for progressives to push through major changes to an international system that has often held back progress at the domestic level. After all, the fundamental problems the left wants to solve don’t respect borders.

Take the latest projections from the United Nations on climate change. The agency estimates mass food shortages and wild fires as soon as 2040, unless greenhouse gas pollution is cut in half in the next decade. Such a rapid energy transition has no precedent in human history, and is unthinkable without internationally coordinated government interventions and spending far beyond that envisioned in the Paris climate accords.

Tax avoidance is similarly a global problem — and a larger one than people may think. Footloose financial capital has made a mockery of national tax laws. Corporations use wily accountants to create ever more ludicrous schemes to obscure where they generate profits. Over $8.7 trillion — or over 10% of global income — is stashed in tax havens—the untaxed spoils of rapacious profiteering by global elites,. Getting rich corporations and individuals to cough up this money will require overhauled national tax laws and extensive joint enforcement operations.

And domestic regulators in the United States have allowed an unprecedented level of corporate concentration and financialization, premised on the empirically invalid assumption that such a concentration of power is “efficient.” Instead, since 1980, at the same time that the sine qua non of regulatory and competition policy became economic “efficiency,” corporate profits rose from 5% of national income to 15%. In a competitive economy, the profits companies earn should be no more than their cost of capital. But over that same time period, the cost of capital has been in long-term decline. As Goldman Sachs said in a 2016 investors note, the rise in profits implies “there are broader questions to be asked about the efficacy of capitalism.” Now, dominant American companies like the Silicon Valley tech giants are seeking to export their predatory business models based on squeezing their suppliers and workers overseas, along with the permissive antitrust policy that protects their anti-competitive business models. Highly levered financial institutions expose the whole of the global economy to unsustainable levels of risk, as became catastrophically clear in the 2008 financial crisis. The economics feeds into the politics, as business interests use their influence to get favorable legislative and judicial treatment. Capping these businesses’ growth will require disentangling their sprawling global operations, as well as reorienting the priorities of the World Trade Organization, World Bank, and other global bodies towards the promotion of sustainable middle-class livelihoods rather than the interests of multinational companies and their shareholders.

None of this will happen, though, if the leaders of the major democracies don’t get on the same page first, and the world is starting to see signs of advance planning for such a contingency. On Nov. 30, Bernie Sanders, the Democratic Socialist Senator from Vermont, launched a new effort with European allies called the Progressive International. The group, co-led by the former Greek finance minister Yanis Varoufakis, aims to tackle the two further threats posed by rising global inequality and nationalist authoritarianism. Only days old, it’s already attracted the support of New York Mayor Bill De Blasio and Iceland’s prime minister Katrín Jakobsdóttir.

The Sanders effort is not the first international network of its kind; all have had their challenges. In the 1920s, European center-left parties founded the Labour and Socialist International, which pledged international cooperation to avert war but was ultimately unsuccessful. After World War II, the group was refounded as simply the Socialist International, a body which was instrumental in pushing for democracy in Southern Europe and Latin America in the 1970s and ‘80s, but today has withered over accusations of mismanagement. Moreover, it has never had mainstream U.S. involvement. In the 1990s, Bill Clinton and Tony Blair’s Third Way became a space for advancing the center-left’s turn to neo-liberal policies that proved not only ineffective at dealing with financial crises, but also, as a result, electorally disastrous.

The right-wing has also made its attempt to partner across borders. Last year, Steve Bannon partnered with a Belgian group called “The Movement” to promote links between Trumpists in the U.S., Brexiteers in England, and other motley European far-right groups. The effort has since won support from Marine Le Pen’s French ethno-nationalists and Italy’s anti-immigrant coalition government. While the group has announced its intention to help right wingers across Europe contest next March’s European Parliament elections, news reports indicate that electoral laws and suspicions of Bannon have hindered the effort.

It’s too early to know how successful the Sanders initiative will be, or whether it will be an adequate counterweight to Bannonism. But almost certainly it will not be enough on its own. The effort’s opening events showed some of the inherent risks to any sprawling international enterprise, with non-U.S. citizen Varoufakis seeming to endorse Sanders for president, while other speakers criticized the bona fides of other U.S. Democrats. A wider spectrum of progressive Democrats need to be included or set up their own international collaboration efforts, so that it’s not seen as a hobby horse of one Senator. And Varoufakis’ close association with Wikileaks’ Julian Assange — anathema to many Democrats for his alleged role in aiding Donald Trump — show that what passes for “progressive” in one country might be counterproductive in another.

Nonetheless, as the Spanish saying goes, the path is made by walking. Only by meeting now and hammering out common approaches to better trade, environmental and other policies will progressives be positioned to enact bold changes if and once in office. After all, late 2022 will bring midterm elections in the U.S. that could cut into the hypothetical progressive president’s base of support. Progressives with ambitions to get things done can’t afford to spend scarce governing time in 2022 with introductions that should have already been made. 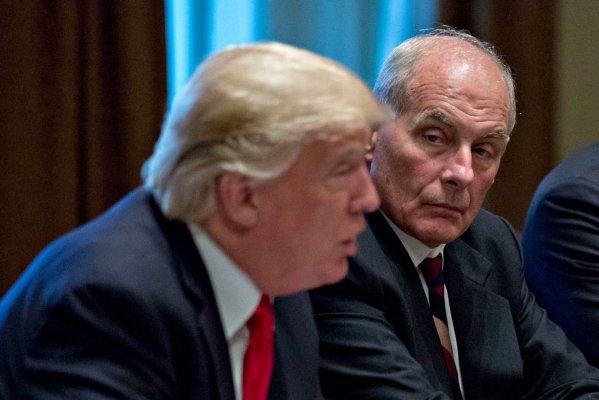 Where John Kelly’s Departure Fits in the History of Turnover Among Top Presidential Advisers
Next Up: Editor's Pick