(Bloomberg) — Elon Musk, the chief executive officer of both Tesla Inc. and Space Exploration Technologies Corp., opened up about his tumultuous year in a wide-ranging interview with CBS’s “60 Minutes.”

Musk, 47, told anchor Lesley Stahl that none of his tweets have been censored since he reached a settlement with the U.S. Securities and Exchange Commission in October.

His problematic Twitter messages in August — about trying to take the company private — caused months of chaos, and the agency sought to improve the governance of a board long criticized for being too closely aligned with its billionaire leader.

“I want to be clear. I do not respect the SEC,” Musk said, according to a transcript provided in advance by the network. Musk added that he’s abiding by the SEC’s terms because he respects the justice system. He also said that he handpicked Robyn Denholm as Tesla’s new board chair, and that in addition to not wanting to be chairman again, he would prefer “to have no titles at all.”

Tesla doesn’t buy traditional advertising, and media coverage of Musk is a big part of how the Palo Alto, California-based company markets itself and its formidable brand. Musk has been on a bit of a charm offensive of late: he appeared on Kara Swisher’s Recode Decode podcast, as well as Axios HBO.

The “60 Minutes” interview, which was filmed at Tesla’s lone auto plant in Fremont, California, largely focused on Tesla’s year in which it raced to ramp up production of the Model 3 sedan. Musk credited the decision to build a third general assembly line outside under a tent with saving the company.

“It was life or death,” said Musk. “Those betting against the company were right by all conventional standards that we would fail. But they just did not count on this unconventional situation of creating an assembly line in a parking lot in a tent.”

Stahl pressed Musk on the string of complaints about conditions inside company factories, including unreported injuries, abusive conditions and excessive hours. Musk said there’s been an “aggressive campaign” by the United Auto Workers to attack Tesla with a “load of nonsense” in an effort to unionize the carmaker.

Musk said he may be willing to buy some of the five factories General Motors Co. plans to idle next year. He also asserted that he doesn’t smoke pot, despite taking a hit of marijuana on a comedian’s podcast that was live-streamed in September.

“I do not smoke pot,” Musk said. “As anyone who watched that podcast could tell, I have no idea how to smoke pot, or anything. I don’t know how to smoke anything, honestly.” 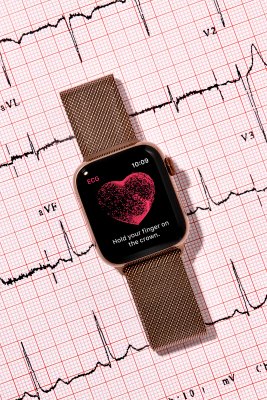 An Inside Look at Apple's Biggest Step Yet in Health Care
Next Up: Editor's Pick