How Trump Changes His Story on the Russia Investigation

But facts uncovered by the probe, intelligence community reports and news stories have forced Trump at times to acknowledge that some of his blanket denials in the past were wrong.

When doing so, however, Trump has followed a pattern. After the blanket denial, Trump admits to a minimal version of the facts, then, later, makes a full admission but argues that there was nothing wrong with it in the first place.

Read below or watch the video above to see how it works.

When discussing hacked Democratic emails, Trump first denied Russia was responsible. “I notice any time anything wrong happens they like to say, the Russians, the Russians — she doesn’t know it’s the Russians doing the hacking, maybe there is no hacking,” he said at the second presidential debate.

And Trump claimed that he had no loans, business deals, real estate investments or contacts with Russia. “I mean I have nothing to do with Russia. I don’t have any jobs in Russia. I’m all over the world but we’re not involved in Russia,” he told CBS Miami in July of 2016. “I HAVE NOTHING TO DO WITH RUSSIA – NO DEALS, NO LOANS, NO NOTHING!” he tweeted the following January.

Even when accepting the intelligence community’s finding that Russia interfered in the election, Trump argued that it might not be alone. “I think it was Russia, but I think it was probably other people and/or countries, and I see nothing wrong with that statement. Nobody really knows,” he said in a July 2017 interview.

Trump also downplayed Russian contacts when they became public: Carter Page was a “low-level” advisor “who nobody even knew,” campaign adviser George Papadopoulos was a “young, low level volunteer,” and a meeting at Trump Tower between Donald Trump Jr., Paul Manafort, Jared Kushner and a Kremlin-connected lawyer was “short” and “went nowhere.”

And after Trump’s longtime lawyer, Michael Cohen, admitted to working on a Moscow real estate deal through June of 2016, Trump waved it away. “Everybody knew about it,” he told a group of reporters. “This deal was a very public deal. Everybody knows about this deal. I wasn’t trying to hide anything.”

Finally, Trump minimized Russia’s interference by arguing that it did not affect the election results. “Now, everybody agrees that there was no impact on the votes in this election, which is very important to say,” he said in July of 2017. “Well, the Russians had no impact on our votes whatsoever,” he said in March of 2018.

He ultimately excused the Trump Tower meeting by arguing anyone would have taken it. “I think from a practical standpoint most people would have taken that meeting. It’s called opposition research or even research into your opponent,” he said in July of 2017. “This was a meeting to get information on an opponent, totally legal and done all the time in politics,” he tweeted in August of 2018.

And he argued that there would be nothing wrong with exploring a business deal with a foreign power while running for president. “There would have been nothing wrong if I did do it,” he told reporters. “Even if he was right, it doesn’t matter because I was allowed to do whatever I wanted during the campaign.”

The problem with Trump’s approach is that it undermines his other denials, while raising the question of why he made these denials. After all, if there was nothing wrong with meeting with foreign officials promising dirt or pursuing business deals while running for president, why deny it in the first place? 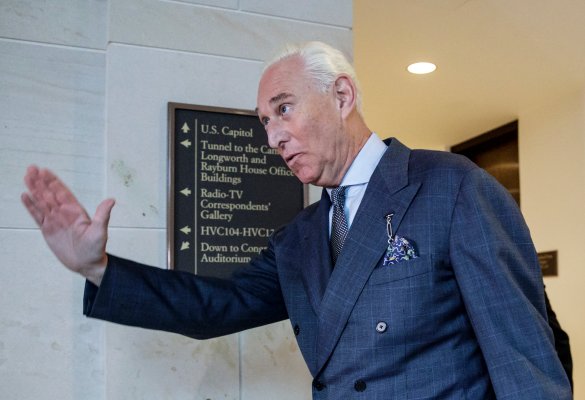 Roger Stone Invokes the Fifth Amendment and Declines to Provide Documents to Democrat Senate Judiciary Inquiry
Next Up: Editor's Pick