Writer John McPhee poses for a portrait in his office at Princeton University in Princeton, N.J.
Bryan Anselm—Redux for TIME
By Sean Gregory

Walk around a giant globe in the lobby of Princeton University’s geosciences building, Guyot Hall, and ascend an elevator to the fourth floor. Then head past some rocks–from Italy, British Columbia, Vermont–enclosed in two glass cases. There, a narrow flight of stairs leads you to the top of a rooftop turret and a lone office belonging to the venerable nonfiction writer John McPhee, no geologist, though his book covering fault lines and formations won a Pulitzer Prize two decades ago. Within the walls of Guyot, McPhee essentially works in its Alaska, one of his favorite places.

McPhee, who’s contributed pieces to the New Yorker since 1963, has spent a lifetime mining fascinating stories from the unsexiest of subjects, like Alaska, geology, oranges, fishing, the wilderness of southern New Jersey. On this early December day, however, McPhee’s not filing on deadline. Instead he’s winnowing down a pool of 76 applicants to select the 16 Princeton sophomores who will take the spring writing course, now called Creative Non-Fiction, that he’s taught at the university since 1975. McPhee, 87, doesn’t write during the semesters he’s teaching. But he insists that being a professor ups his productivity, since he returns to his projects recharged. “When I got to be an old man, I didn’t quit,” McPhee says. “I’d rather be dealing with these students than staring at the wall.”

Given his prolific output, which includes the release of his 30th book, The Patch, in November, McPhee’s strategy is working just fine. In his new book, McPhee tosses a curious curveball. He divides The Patch into two distinct sections: “The Sporting Scene,” a collection of stories on fishing, golf, lacrosse and football published in the New Yorker in recent years; and “An Album Quilt,” a hodgepodge of 56 snippets from McPhee’s work over the past half-century-plus in the New Yorker, TIME and other places, that had never before appeared in any book. He sifted through 250,000 words of material that could have qualified for the “Album Quilt” and tossed aside 210,000 of them. This project would torture most writers. Not McPhee. “I didn’t give a damn about preserving these things,” McPhee says. “I wanted to find an entertaining montage.”

He did just that. “An Album Quilt” is a delightful assemblage of miscellany, hopping, for example, from a piece on the golf habits of the D.C. elite to a miniprofile of Sophia Loren to a bit about the bears working for the Moscow State Circus. “They make an American think of all those snobbish, slobbish fat brown blubber-bottomed freeloading Yellowstone bears,” McPhee writes, “who have yet to lift a claw for their country.” A small block imprinted on the page, which mimics the pattern on a quilt that McPhee once received as a gift, divides each of the passages. Some entries are a few pages, others a paragraph.

The book’s unusual structure highlights McPhee’s underrated gifts. He’s known for his exhaustive reporting on the subjects in which he takes an obsessive interest. But in smaller bites, McPhee’s writing stands out. The Patch is a parade of enviable sentences. McPhee notes that Cary Grant imitators once populated Hollywood. “Grant has many apes but few friends,” McPhee writes. He describes a pool of thick chocolate at the Hershey factory in Pennsylvania. “The world record for the fifty-yard free-style would be two hours and ten minutes.” McPhee opens a story about climbing hills with an engineer who can pinpoint one’s height above sea level. “A person who specializes in handheld altimeters will always know how high he is but may have difficulty keeping his bearings.”

While growing up in Princeton, where his father was a sports-medicine physician at the university, Albert Einstein–leonine white hair and all–would watch McPhee and his buddies play ragtag football on the lawn of the Institute for Advanced Study, Einstein’s workplace. “He would stand there and contemplate us,” McPhee says. In high school he had a gig killing fruit flies and washing centrifuge tubes stained with beef blood for the university’s biology department, in the very building where his office now sits.

McPhee’s shy and not prone to publicity. None of his book jackets has included an author’s photo. During our conversation, he’s unfailingly polite and patient. But I get the sense he’d rather be focusing on a more pressing task: evaluating candidates for this writing class. A few years back, family and friends tried to organize an 80th-birthday celebration for him. He squelched it. “I’d rather be deep-fried,” McPhee says, with a laugh.

To keep sharp, McPhee tries to ride a bicycle 15 miles every other day in and around Princeton, where he’s lived all his life. During these treks, McPhee shares with his riding partners stories about the history of local landmarks, his journalistic adventures, his family. (McPhee dedicates The Patch to his 10 grandchildren.) One friend describes him as the world’s nicest know-it-all.

McPhee’s first job out of college was writing live television plays in the 1950s. To discipline himself, he’d sometimes strap himself into a chair with his bathrobe belt. “A writer grows on the volume of what the writer writes,” McPhee says. “People standing around, over drinks, talking about writing, isn’t writing. Writing is when you go off on your own, close the door and fight it out with the blank screen or paper. That is the No. 1 teacher.”

He requires that his students submit an outline with every written assignment. “Sooner or later, you have to have a sense of structure, or all you’ve got is a bowl of spaghetti,” McPhee says. He’ll accept anything–I, II, III, A, B, C, a doodle, little stick figures. “It’s just the basic idea of thinking things out before you do it,” says McPhee. “It can be applied to almost anything.”

McPhee took a deep dive into his writing process in his previous book, Draft No. 4, published last year. The Patch trades in lighter fare. He considered setting up “An Album Quilt” chronologically, or noting the original publication date of each entry, or including an index, so if a reader wanted to read about Cary Grant, he could go right to page so-and-so. “But thinking over all these things,” McPhee says, “I opted for it to be random, to get rid of any kind of stuff like that. Because I think it’s tedious.” Part of the fun for the reader is deciphering when a piece was written. A passage about the first word processor to appear in the New York Times newsroom–“A tiny square of light, known as the ‘cursor,’ began to move up the face of the tube. It was something like the bouncing ball that used to hop from word to word in song lyrics on movie screens”–makes quick reference to President Gerald Ford. Bingo!

He has no plans to retire from writing or teaching. McPhee has an idea, the specifics of which he’d rather not share, that he’ll delve into after the spring semester. Before I go, he insists that I look behind me at two bookshelves in his office, which house some 150 books, all written by alums of his writing class. A small model freight car, however, sits atop one of the shelves. One of his former students, who’s now on the board of a family-owned rail company in Georgia, sent it to him. To McPhee, helping run a railroad is the top thing. “And if you can’t,” he says, “write a book.” 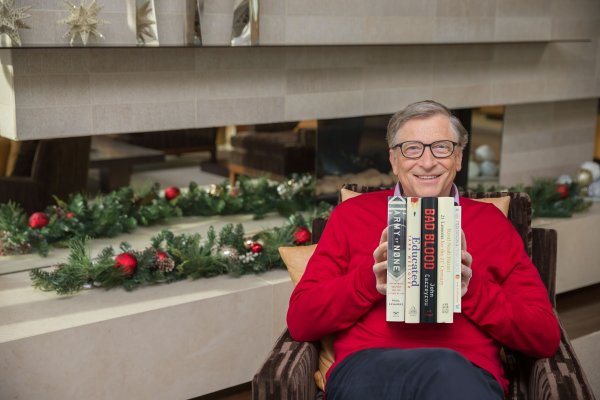 Bill Gates Shares the 5 Best Books He Read This Year
Next Up: Editor's Pick