Published Wednesday by CNN, the images reportedly show the expansion of a unidentified, active long-range missile base near the previously identified Yeongjeo-dong base in North Korea’s mountainous interior. Analysts say the images offer evidence that continuous construction has been undertaken to upgrade and expand both facilities, despite months of high level talks and negotiations between North Korea, its neighbor South Korea and the U.S.

The new images surfaced a month after U.S. analysts located at least 13 of an estimated 20 secret North Korean missile sites, and six months on from North Korean leader Kim Jong Un’s historic meeting with U.S. President Donald Trump in Singapore in June. “Whatever Kim says about his desire for denuclearization, North Korea continues to produce and deploy nuclear armed missiles,” Jeffrey Lewis of the Middlebury Institute of International Studies at Monterey, one of the analysts that identified the site, told CNN.

The findings appear to undercut Kim’s pledge to reduce his country’s nuclear capabilities, most recently announced at a September summit with South Korean leader Moon Jae-in. At that meeting, the North Korean leader agreed to permanently dismantle a nuclear facility at another site in Nyongbyon, pending reciprocal measures from the U.S. The announcement garnered praise from President Trump, who called the development “very exciting” in a tweet.

The U.S. State Department and South Korea’s Foreign Ministry declined to officially comment on the images, according to CNN. At an event in Washington on Tuesday, U.S. National security adviser John Bolton said that Trump is in favor of holding a second summit with Kim, due to North Korea’s failure to live up to the commitments made during their first meeting in June. However, that particular summit resulted in a vague agreement signed by both leaders to “work toward complete denuclearization” of the Korean Peninsula, rather than a full commitment from Kim to denuclearize. 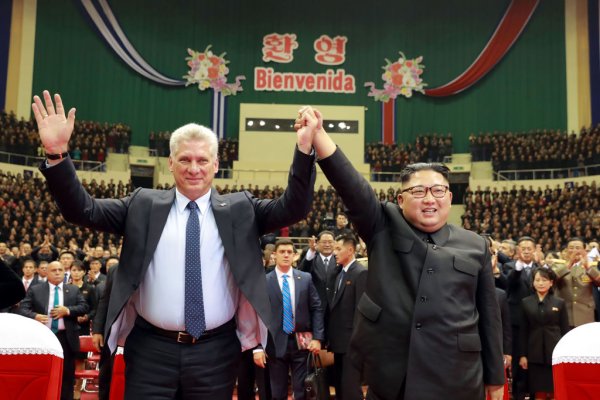