'The Brightest of a Thousand Points of Light.' George W. Bush Chokes Up Eulogizing His Father

Former President George W. Bush fought back tears while eulogizing his father, President George H.W. Bush, at his state funeral at the National Cathedral on Wednesday, praising him as a “kind soul” and “the brightest of a thousand points of light.”

“Your decency, sincerity and kind soul will stay with us forever,” Bush told the audience, which included President Donald Trump, all living former presidents and first ladies and numerous world leaders.

The 43rd president held his composure through the speech – but became visibly emotional when he referenced his sister, Robin, who died of leukemia at age 3, and his mother Barbara Bush – who died in April.

“So through our tears, let us know the blessings of loving you, a great and noble man, the best father a son or daughter could have, and in our grief, let us smile knowing dad is hugging Robin and holding mom’s hand again.”

He also credited his father with showing him how to be a good parent, grandparent and great-grandparent, and confirmed that his father’s last words were to him: “I love you, too,” George W. Bush said his father told him.

The emotional speech also had moments of levity. George W. Bush recalled that in his old age, his father loved to sit on the porch and watch the ocean, but also decided to go parachuting for the final time at the age of 90.

“He was born with two settings: full throttle, then sleep,” Bush said.

After the funeral, George H.W. Bush’s remains will be flown back to Houston and then transported via funerary train to the grounds of his presidential library at Texas A&M University. 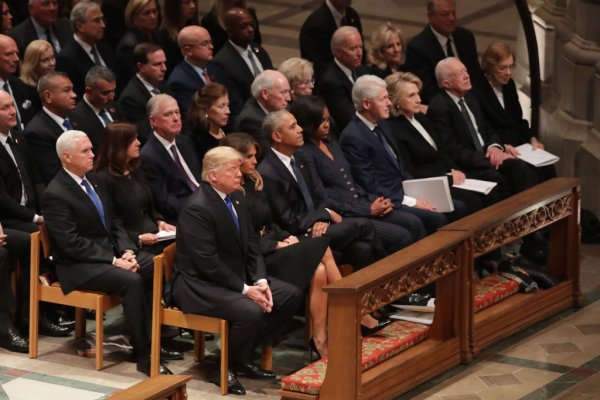 See All the Leaders at George H.W. Bush's Funeral
Next Up: Editor's Pick