Mikhail Gorbachev: George H.W. Bush and I Ended a War Together. But Peace Is Now in Jeopardy

Ideas
By Mikhail Gorbachev
Gorbachev, a Nobel Peace Prize laureate, was the only President of the Soviet Union.

On the day when I learned of the passing of George Bush, I recalled my meetings with him that marked turning points in our personal relationship and in the relations between our countries.

Our first serious conversation took place in December 1987, when I was on an official visit in Washington. George was then Vice President and running for President.

The visit culminated in the signing of the Intermediate-Range Nuclear Forces Treaty; after, I would depart from an Air Force base. According to the protocol, or perhaps according to his own wish, the Vice President was to accompany me there. George suggested that he go in my car, which was unusual—certainly not according to protocol.

Later, on many occasions, we recalled that “conversation in the car.” It went far beyond the usual exchange of pleasantries. We agreed that relations between our countries were reaching a new level and that new opportunities were opening up, which must be used to the maximum extent possible. The Vice President assured me that, should he be elected, he would continue what we had started with President Reagan. And importantly, we said that, in relations with third countries, we would not undermine each other’s interests.

However, after Bush was elected President, there were reports in the U.S. media that the new Administration would not be ready to get down to serious work with us right from the start, that it was taking a pause for reflection. Why would the Administration wait? We were receiving all kinds of signals, but it was clear that the hard-liners were increasingly active.

Our relations suffered a loss of momentum. We knew that some members of the Administration were pushing Bush to continue to play the waiting game. So the message that came in September 1989 was important: the President was ready to meet at a halfway point, even before the exchange of -official visits.

What happened during the Malta summit that December can be described without exaggeration as a historic breakthrough. Against the backdrop of turbulent changes in Central and Eastern Europe and the accelerating process of German unification, including the demolition of the Berlin Wall, Bush said, “I would tread cautiously.” He added, “I will not be jumping on the wall, because there is too much at stake.”

When the two delegations met, Bush outlined a program of cooperation between our countries in various areas, including disarmament, which was generally constructive. I responded by stating: “The new U.S. President must know that the Soviet Union will not under any circumstances initiate a war … Moreover, the USSR is prepared to no longer consider the U.S. as an enemy and announce this openly.” This was not an off-the-cuff remark, but instead a position approved by the Soviet leadership. Our conversation with the U.S. President continued in that spirit.

The Malta summit drew a final line under the Cold War. This became clear when the events in Central and Eastern Europe and the process of German unification acquired an even greater speed. Working together, we succeeded in keeping them on a peaceful track.

A few months later came another test: Saddam Hussein’s invasion of Kuwait, and his regime’s attempt to annex that country. This crisis proved that the Cold War was a thing of the past. The Soviet Union and the United States took a principled stand. The aggression was reversed, but there was no U.S. occupation of Iraq, no “regime change.”

All of this was taking place even as events in my country, as it transitioned to democracy and market economics, took a dramatic turn. My step-by-step approach to reform was being attacked from various sides—not just by those who wanted to stop the democratic process and turn back the clock but also by separatists seeking to dismember the country and supported by hotheads in Russia.

In these circumstances, it was very important for me to get a clear idea of the intentions of the United States. I put the question bluntly when I met with the President in London in July 1991, during the G-7 meeting, to which the President of the USSR was invited for the first time.

“I believe,” Bush replied, “that your success is in line with the profound interests of the United States. It is in our interest to see you work out the problems of relations with the republics. The demise of the Soviet Union would not be in our interests.” Though at the G-7 meeting our Western partners failed to take concrete steps to support the transformations in the Soviet Union, I took the remarks of George Bush seriously.

During his visit to the Soviet Union a little more than two weeks later, we had a serious and far-reaching discussion. We not only signed the Strategic Arms Reduction Treaty but held an unprecedented discussion of a future international security system, to be created by common efforts.

That prospect, however, was scuttled by the attempted coup d’état in the USSR in August 1991. The coup, organized by reactionary forces, failed, but it weakened my position as the USSR President. We were not able to preserve the Union.

I vividly remember our talk on the phone on Dec. 25, a few hours before I announced that I was stepping down from the presidency of the Soviet Union. We reviewed the results of our cooperation. Our main accomplishment was our agreement to destroy thousands of nuclear weapons, both strategic and tactical. Together, we helped to end conflicts in various parts of the world. We laid the groundwork for a partnership between our countries.

Those historic results are now in jeopardy. The world is on the brink of a new confrontation and a new arms race.

George and I, having left government, often discussed the alarming trends that threaten world peace. We sometimes differed in our assessment of the events but we agreed on one thing: the end of the Cold War was not a victory of one side over another. It was the result of joint efforts. Today, only joint efforts can avert a new confrontation and the threat of a devastating war, thus restoring the prospect of a new world order—more secure, more just and more humane. 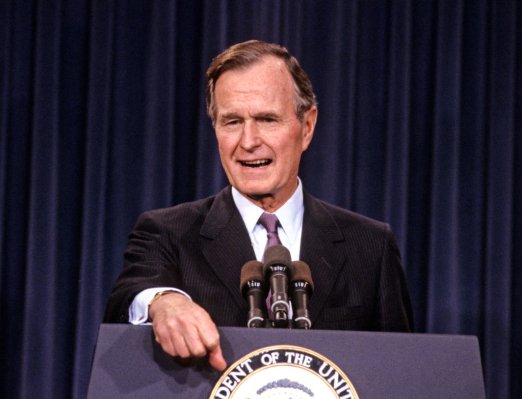 I Was Houston's Mayor. Here's Why I Was Proud George H.W. Bush Called This City Home
Next Up: Editor's Pick