How Understanding the 'Greatest' Generation Can Help Us Understand George H.W. Bush

Even as President George H.W. Bush was memorialized on Wednesday with a national day of mourning, pundits were debating how to define the legacy of the 41st president, a venerated man in his old age whose reputation as president has improved in comparison to several of his successors. But, when viewed through one particular lens, he is much easier to understand: Bush was the last representative of the G.I. or “Greatest” generation to occupy the White House.

That generation, born from 1904 or thereabouts through 1924, monopolized the presidency from 1961 through 1993, when Bush left office—the longest continuous run of any American generation. Bush’s life exemplified that generation, and his strengths and weaknesses were theirs as well. His greatest achievements, which came in foreign affairs, reflected their capacity to work as a team, to accept reality as they found it and, above all, to understand the other person’s point of view.

Much of the childhood of the G.I. generation took place during the Progressive era, when the nation believed that reason and science could build a better future. The first half of the 20th century was a great epoch in American education, from which Bush and his peers benefited. And starting in 1933, when Bush was only 9, the G.I. generation also began to benefit from a series of federal programs that would look after them throughout their lives. The New Deal put them to work and made it easier to attend college, the G.I. Bill allowed returning veterans (including Bush) to educate themselves, and the tax code of the 1940s and 1950s favored young families, while housing programs encouraged the construction of suburbs. In 1972, when the first G.I.s were retired, social security benefits went up significantly. In return, ten million G.I.s served in the Second World War, where hundreds of thousands lost their lives. The victory gave them a lifelong faith in their country and the principles for which it had come to stand.

Bush, though born to privilege, was no exception to this general pattern. When he graduated from Phillips Andover Academy in 1942, just as the Philippines and much of Southeast Asia fell to the Japanese and the world held its breath to see if the USSR could survive another year of war against Germany, he went right into the Navy and flight school rather than going to Yale. Just as John F. Kennedy lived through the loss of some of his crew when a Japanese destroyer sank his P.T. boat, Bush endured the loss of two crew members in his plane who were unable to bail out.

Like so many of his fellow veterans, the returning Bush went into college on the G.I. bill, married his high school sweetheart, and did not even wait for graduation to begin creating a large family. Then he threw himself into the oil business in Texas. Like so many G.I. fathers, he devoted himself to his work while his wife Barbara raised the children. Confronted with the devastating loss of their daughter Robin to leukemia at a very early age, they handled it with typical stoicism, not even telling her older brother George W. that she was gravely ill before she died. Bush, like many fathers of that time and class, seems to have paid little attention to his sons as children, but brought them into his orbit as adolescents on the condition that they do their best to replicate his own life. All four seem to have tried to do so. Bush’s letters to his family in his middle age, published about ten years ago, are also typical: they are formal, stilted, and show great difficulty expressing any deep emotion, except in one or two that talk about his dead daughter.

G.I.s were natural optimists, and George Bush needed lots of optimism to reach the White House. In 1980, when he ran for President for the first time, he had waged just four election campaigns, losing two runs for the Senate and winning two elections to Congress. Yet he managed to secure the Vice Presidency—the office that became such a common stepping-stone to the White House in the second half the 20th century—and served eight often-humiliating years without complaint to earn his chance at the Whites House. Despite his diffidence, Bush, a lifelong athlete, was fiercely competitive, and his campaign mercilessly attacked Michael Dukakis’ vulnerabilities, leading Bush to a come-from-behind victory. He entered office at a critical moment in world history, and did great things on the world stage by sticking to the principles he had fought for in his youth.

Significantly, Bush chose to leave domestic affairs entirely out of his memoir, A World Transformed. That gave him plenty to talk about, including the repercussions of the fall of the wall and the collapse of the USSR and the first Gulf War. That memoir, and the diary of his time as U.S. envoy to Beijing, belong on the reading list of any aspiring diplomat. In every one of the many conversations Bush describes with leaders such as Gorbachev and Shevardnadze, Margaret Thatcher, Helmut Kohl and François Mitterrand, he shows curiosity and insight, always representing his interlocutor’s position succinctly and fairly while sticking to his own. Like John F. Kennedy, he understood the first rule of diplomacy: if you want your counterpart to help you with your problems, you have to understand his. “I called Hosni Mubarak (of Egypt) on September 1 [1990—a month after Saddam Hussein occupied Kuwait] to tell him I was going to recommend to Congress that Egypt’s entire debt to the United States be forgiven. I knew it would be difficult to accomplish . . . [but] Egypt was crucial to the entire Middle East peace process and the coalition. We had to find a way to help him out.” He understood how torn Gorbachev, himself under severe domestic pressure, was between helping the U.S. and trying to protect the USSR’s long-time ally Iraq. But Bush’s patience—so utterly different from his Boomer son 12 years later—enabled him to assemble a coalition of NATO allies, the USSR in its last year of existence and critical Arab states. He also had the sense, as I heard him explain quite brilliantly in a commencement address in June 2001, to realize that sending coalition forces to Baghdad would not contribute to peace and stability in the Middle East.

The United Nations had come together in San Francisco just as Bush was demobilizing from the Second World War, and now, with the end of the Cold War, it could function like the worldwide peacekeeping force that its founders had intended. But Bush senior was, as it turns out, the last American President to make it work that way. In 2002-3 his collaborator and co-author Brent Scowcroft to tried to stop his son’s folly in Iraq, but could not do so. Other aspects of his team play at home look less admirable at 25 or 30 years’ distance, but on the world stage his G.I. sensibilities served the US and the world well.

Franklin Roosevelt and Dwight D. Eisenhower, from older generations, had established the domestic and foreign policy consensus within which Kennedy, Johnson, Nixon, Ford, Carter and Bush worked. They kept it alive and all left office with important accomplishments thanks to the ethos of their generation. It is as a member of that generation who put its values to work in the world at large that I choose to remember George H. W. Bush.

The original version of this article misidentified which U.S. Presidents saw combat during the Second World War. Bush and Kennedy were not the only ones. 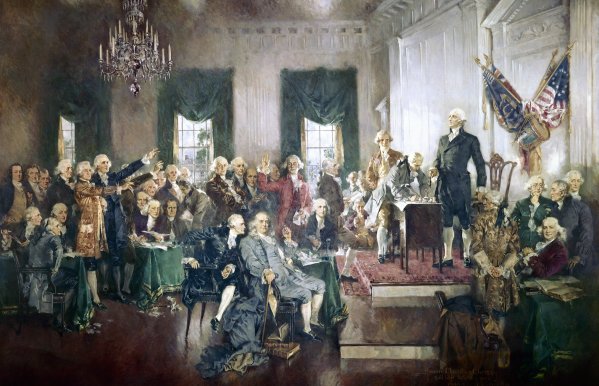 Why America’s Founders Tried to Recruit a Foreign Prince to Be Their King—And How That Moment Holds a Warning for Today
Next Up: Editor's Pick