The government is increasingly worried that the economy, alongside its own political fortunes, is threatened by demonstrations against fuel taxes that have spiraled into a push-back against Macron’s policies.

Finance Minister Bruno Le Maire said the impact of the riots was “severe,” and left a meeting of finance ministers in Brussels to return to Paris for crisis talks with colleagues.

“If we need to cut spending faster to be able to cut taxes faster for households and businesses, I’m ready to commit to this course,” Le Maire said.

Amplifying tax and spending cuts would raise further uncertainty over the path of France’s finances, which are already under pressure from a weakening economy. To work, the government would need to find ways to trim spending that doesn’t harm growth and tax measures that stimulate the economy while not leaving too great a gap in revenue.

For Macron, the stakes are high as he doesn’t want to damage the credibility he needs to push for reforms in Europe. The European Commission has already said his existing budget is at risk of non-compliance with EU rules.According to Marc Touati, economist and president of business consultancy ACDEFI, Macron may be forced to take a more radical approach, even if that means the deficit slipping a bit.

“When there’s a fire you need to put it out,” he said. “If you want to give people a bit of breathing space, you have to cut taxes.”

After a weekend of violence that made headlines around the world, warnings about the economic impact continued on Monday.

Revenues at large supermarkets have dropped as much as 25 percent because of the grassroots movement, and hotel bookings have been hit to a similar extent, Le Maire said. Small retailers are suffering even more and order intakes have slowed at car-makers Renault SA and Peugeot and Citroen PSA Group.

The government has already indicated it could make changes to limit the impact of increased fuel taxes when oil prices rise. Companies will also be allowed to temporarily lay off staff, and be given more leeway to open on Sundays to make up revenue shortfalls, while the administration will be lenient with delayed tax payments for affected businesses.

But Le Maire said bigger overhauls will be required.

“There are millions of French people in deep suffering who work, who go to great efforts, who get up early but don’t manage to make ends meet,’’ he said. “That is totally unacceptable. But the only way to get out of this is to make work pay better, cut public spending and cut taxes.” 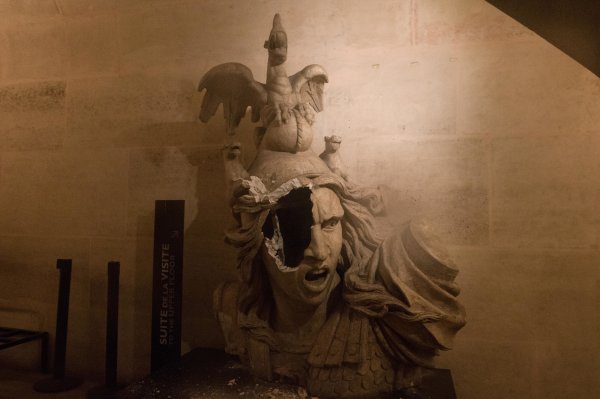 France's National Treasures Feel the Wrath of Paris Protests
Next Up: Editor's Pick