'Like Pieces of a Puzzle.' The Story Behind That Dramatic Alaska Earthquake Aerial Photo

I was in my car with my nine-year-old son, headed to drop him off at school before I went to work on Nov. 30. We had made it only a couple hundred feet when the car began bouncing. As I pulled over, thinking I had mechanical trouble, I noticed snow cascading from the trees. The houses in my neighborhood had gone dark.

I’ve felt enough quakes—at least a few each year—to know this was big and would be major news. No one from the Anchorage Daily News (ADN) needed to tell us this was an all-hands-on-deck moment. We communicated primarily via Slack, but I was already headed out to find images of damage before I knew where to go. Because schools were soon closed, my son Quinn came along for the ride for the first hour as I stopped into a Walgreens and a university library, both of which were a mess.

All four ADN visual journalists hit the streets right away. Another, who had retired just weeks ago, was called back into action. Our immediate challenge was the gridlocked traffic — the result of so many workplaces and schools being closed — and power outages. But we were spread out enough that pictures came in quickly from different corners.

Activity on social media helped us identify locations where the worst damage had occurred. Some of it was apparently on Glenn Highway, the only major highway that stretches north from Anchorage, but traffic was at a standstill. More damage was reported near Wasilla, which I would need the Glenn Highway to reach by car. I knew if we were going to get images from there in a timely fashion, we’d need to fly over it.

My photo editor, Anne Raup, tried to get a charter flight company on the phone, but couldn’t reach anyone. We decided I should go to Lake Hood, a small plane airport, to see whom I could find to help. It was mostly empty. Regal Air was able to call a pilot in to work, and a staff member prepared a four-seat, single-engine bush plane for takeoff.

North of the city, we made a few laps around some isolated but dramatic damage on a closed stretch of highway. In frozen ponds and open fields I could see fractured ice, which I found fascinating and oddly beautiful. I photographed it all with a Nikon D4 and, mostly, a 70-200mm lens. I’m lucky we were in a plane with a window that slid open—not all of them are so equipped. Then we headed toward Wasilla, about an hour’s drive north of Anchorage. A reporter covering the area suggested I go to Vine Road, but neither the pilot nor I was familiar with where that was. I used Google Maps while in the air to find it.

Upon arrival, we made several passes and I photographed it from all sides as the pilot monitored other aircraft in the vicinity and got me in position. The roadway looked like pieces of a puzzle. The light snow cover helped the cracks in the earth stand out and tell the story.

ADN photographers have a fair amount of experience shooting from planes. It’s a staple of our annual Iditarod coverage. The key: a pilot who understands the mission and wants to help make it great. Devon Holmberg of Regal understood what I was after, and delivered.

We got back to Anchorage after an hour in the air. I texted with Anne, who was sorting through many staff and reader images, and who instructed me to “send there”—meaning, file my pictures as soon as possible. I sat on the floor of the airplane hangar to edit. I made around 150 pictures of Vine Road and ultimately picked one that felt the most three-dimensional on first blush, thinking there would be time for further review later. Before I closed my laptop and headed to find more photos from the ground, I tweeted it out.

In a few months I will have been at the Anchorage Daily News for 20 years. I’m pleased with this photograph, but more than that, I’m proud of the work our small, dedicated, scrappy newsroom did on a chaotic day. I thought we—reporters, editors, the whole darn family—made a difference for our readers who truly needed to know what happened. I’m honored to have played a role.

Once home, my wife and two kids and I talked about each of our earthquake experiences over dinner. Even as aftershocks kept rolling through, I went to bed rattled but fortunate. A 7.0 earthquake might well have been catastrophic in some parts of the world. Here, there were no early reports of death and relatively few injuries. We were lucky, I think. 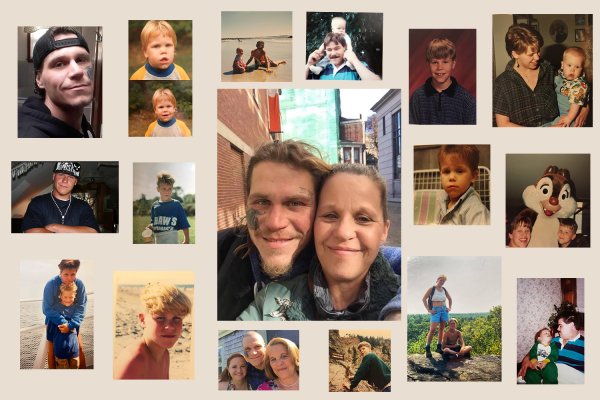 A Mother Speaks Out About Opioid Stigma and The Pain Of Losing Her Son
Next Up: Editor's Pick