Sully, the service dog of the late President George H.W. Bush, has been pictured lying beside his former owner’s coffin.

The picture was posted on Twitter by Bush family spokesman Jim McGrath, along with the caption: “Mission complete.”

Sully will reportedly be traveling with the former President’s casket on his flight to Washington, D.C. on Monday. The coffin will be flown from Texas to the Capitol on board Air Force One, and then back on Wednesday, and Sully will be there every step of the way.

Bush received the two-year-old Labrador in June from America’s VetDogs charity. The former President, who suffered from a form of Parkinson’s disease late in life, had used a wheelchair since 2012. Highly trained, Sully was able to open doors, press emergency buttons and retrieve objects for the former President.

“Our thoughts and prayers are with the entire Bush family during this difficult time,” said John Miller, President and CEO of America’s VetDogs. “It was truly an honor to have provided service dog Sully to be by the President’s side for the past several months.”

The dog — who has his own Instagram account — was named after the airline pilot Chesley “Sully” Sullenberger, who in 2009 landed a passenger jet on the Hudson River, saving all of the 150 people on board.

Sully will now work as a service dog assisting with therapy for wounded soldiers. 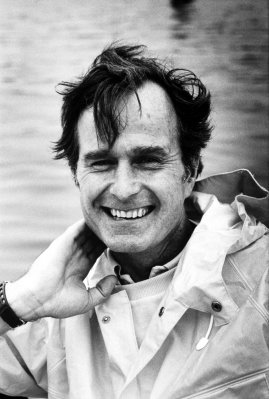 See Inside the Private Family Life of a Young George H.W. Bush
Next Up: Editor's Pick