The True Story Behind The Favourite

With its acid-tongued wit and blunt physical comedy, Yorgos Lanthimos’ The Favourite is anything but a typical stuffy period drama. The acerbic Oscar contender depicts the bitter rivalry between Abigail Masham (Emma Stone) and Sarah Churchill (Rachel Weisz) as they compete to influence an increasingly unhinged Queen Anne (Olivia Colman) during her early 18th-century rule.

While based on real historical events, the film certainly indulges in the sensational. As TIME’s film critic Stephanie Zacharek puts it in her review, “this period drama or comedy, depending on your mood, is sort-of based on fact, gorgeous to look at, and features a trio of marvelous performances.”

The Favourite was nominated for 10 Oscars, including Best Picture, Best Actress (for Colman) and Best Supporting Actress (for both Stone and Weisz).

Here’s what’s fact and fiction in The Favourite.

In the film, Abigail Hill (later Masham, following her marriage) first meets her cousin Sarah, Duchess of Marlborough, when she arrives at the palace seeking employment after her family has fallen on hard times. Abigail procures a job as a scullery maid, but she quickly ascends in the ranks by playing on Sarah’s sympathies. While the movie accurately represents the circumstances of Abigail’s family misfortune, the real Abigail began working for her cousin long before she arrived at Kensington Palace (which, by the way, was not where The Favourite was filmed, for obvious reasons).

Born in 1670, Abigail worked as a servant in various houses of nobility throughout her early life. She eventually came into contact with Sarah, who took pity on her and employed her at her own home, prior to Anne’s ascent to the throne in 1702. It wasn’t until around 1704 that Abigail was first employed at the Queen’s household, and by that time, Abigail and Sarah were already close.

As portrayed in the film, Sarah and Anne grew up together and were incredibly close for much of their lives. During Anne’s reign, Sarah exerted political influence over the queen, who, according to a biography by the historian Anne Somerset, was not well educated in matters of state.

Queen Anne did not have pet rabbits

According to the film’s historical consultant, Anne did not have a pet rabbit for each of her 17 deceased children. During the 18th century, rabbits were considered to be a “foodstuff or pest.”

It took Abigail much longer to rise in Anne’s favor

The movie does not specify a timeframe for its events, but it seems to suggest that Abigail rose in stature in a relatively short period of time. However, the events portrayed in the film actually happened over the course of several years. Abigail arrived at the palace in 1704 and married Samuel Masham in 1707, and Sarah was stripped from her royal position in 1711. It wasn’t until after Abigail’s marriage to Lord Masham, which occurred without Sarah’s knowledge, that Sarah began to harbor adversarial feelings toward her.

Sarah and Abigail’s rivalry was political in nature

As in the film, the real Abigail aligned herself with Robert Harley (Nicholas Hoult) to swing Anne in the direction of the Tories. Sarah, on the other hand, was staunchly aligned with the Whigs.

Abigail did not poison Sarah

This dramatic plot point was more of a narrative tool to get Sarah out of the palace and was not drawn from history. Nonetheless, the real Sarah was frequently absent from the court for long periods of time, which frustrated Anne. These absences allowed Abigail to seek and earn Anne’s favor.

The three women were not known to be sexually involved

The most sensational element of the film involves the sexual nature of Anne’s relationships with Sarah and Abigail. Most historians maintain that it was unlikely that Anne was physically intimate with either of them. However, rumors about the women are part of the historical record of Abigail and Sarah’s rivalry. A song circulated by the Whigs suggested that Anne committed “dark deeds at night” with a “dirty chambermaid.”

The real Sarah also threatened to blackmail Anne with personal letters she penned to her, many of which included romantic sentiments expressed toward Sarah. Since it was common at the time for close friends to employ romantic language in correspondence with one another, the letters aren’t definitive proof that Sarah and Anne were sexually involved. Nonetheless, the letters, which demonstrated Anne’s considerable dependence on Sarah, were still incriminating enough to be used as blackmail. In the end, Sarah chose not to publish them, despite her dismissal by Anne.

Queen Anne had a husband

While he doesn’t make an appearance in the film, Queen Anne was married to Prince George of Denmark. George died in 1708, meaning that he would have been alive during the majority of the timeline covered in The Favourite.

Pineapples really were new to England at the time

In the movie, Abigail makes a comment about how her “maid is on her way up with something called a pineapple.” Her lack of familiarity with the fruit is played for comic effect, but it’s also historically accurate: pineapples were brought to Europe by the Dutch in the mid-17th century and weren’t cultivated in England until the early 1700s, meaning that the fruit would have been unknown to Abigail. 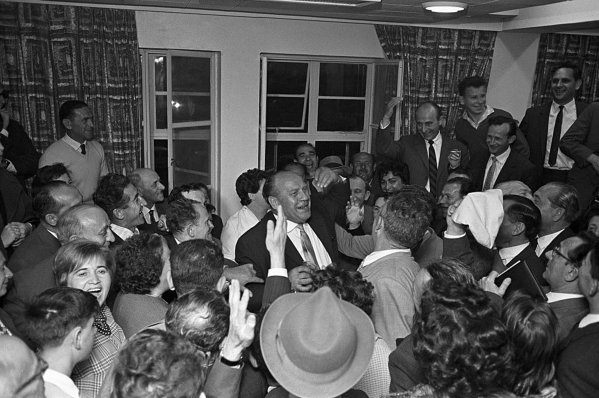 'He Was Sent by God to Take Care of Us': Inside the Real Story Behind 'Schindler's List’
Next Up: Editor's Pick