'There Is an Atmosphere of Civil War.' France's Yellow Jackets Are Driving Fury at Macron

On the one side sits a hugely powerful global leader who made his fortune as an investment banker, then in his 30s took power of the world’s seventh-biggest economy. Pitted against him: A growing mass of protestors seething with frustration and contempt, who opinion polls said this week have the support of two-thirds of the country.

Emmanuel Macron is that leader, of course. The French President landed in Argentina this week for the annual G-20 summit, as one of the group’s most pivotal leaders. But it must feel like a vacation compared to the mess back home 7,000 miles away.

For the past two Saturdays, a protest movement calling itself the gilets jaunes, or yellow jackets, has stormed the streets of Paris in fluorescent safety vests. The protests have attracted a huge array of people, with some setting alight barricades, blocking access roads, smashing windows and hurling chunks of concrete at riot police on the Avenue de Champs-Elysées.

The yellow jackets — so-called for the high-visibility vests they wear — are vowing to take to the streets again this Saturday, and security forces have begun massing in Paris, boarding up luxury stores on the grand avenue and erecting barricades of their own.

“There is an atmosphere of civil war,” said Thierry Paul Valette, a self-appointed spokesman for the movement, over lunch with TIME on Friday. “Macron has a big responsibility now. He can either calm the situation, or enflame it,” he says. “The president might be in Argentina. But he is not in exile.”

The spark for the movement came in mid-November, after Macron announced he would increase fuel taxes, in order to help finance his plan to transition France to renewable energy. The increase could add about 10 euros ($14) to a family’s monthy household expenses. And while that is a significant sum to many poor families, for many others, the pronouncement seemed simply to be the final straw — It was “la limite,” Valette says.

The fuel tax appeared to crystallize perceptions of the French leader as disconnected and arrogant, and lacking in empathy for those who had not, like him, sailed through life. Macron has proposed changes that economists and policy analysts have thought necessary in France for years, in order to resolve endemic social and employment problems. But in addition, he has emerged in the minds of many as a rich know-it-all who believes he is never wrong. His blunt talk—like telling a long-time unemployed man to cross the street and work in a café—has only deepened that sense.

“He is detested,” says Valette, 42, an artist and writer. “He does not discuss, he does not debate. He is authoritarian,” he says. Looking ahead to Macron’s chances of winning a second term as president in 2022, he says, “It is impossible. It will take a miracle.”

In November 2017, TIME featured an interview with Macron—one of the very few he has granted while in office—in which he appeared on the cover as an almost regal figure, with the headline: “The next leader of Europe—if only he can lead France.”

President Emmanuel Macron in the Élysée Palace on Nov. 7.
Photograph by Nadav Kander for TIME

One year later, the second part of that headline remains an open question even if the first remains broadly accurate. With German Chancellor Angela Merkel retiring in 2021, and Britain leaving the E.U. in March, he has emerged, at just 40, as Europe’s preeminent leader, determined to power through the E.U.’s global human rights and environmental programs.

Yet all that seems far more complicated to accomplish, thanks in some measure to his inability to peacefully govern the country.

The fractured movement of yellow jackets exploded seemingly out of nowhere, gathering momentum over the past two weeks through Facebook pages that have organized local demonstrations across a country of 67 million people. It has no leader, and no affiliation to a political party or trade union. It resembles more the grassroots Arab Spring protests of 2011, which toppled governments, than the frequent French demonstrations that usually accompany mass strikes. The one commonality among these demonstrators are the high-vis jackets that give them their name, which can be found in every vehicle under French law.

Facing a movement that seemed to spread like a brushfire, Macron on Wednesday made a televised speech, appearing to show a rare moment of humility. “I have seen, like many French people, the difficulties for people… making ends meet at the end of the month,” he said. Still, he said, “We must not change course. I believe very profoundly we can transform this anger into the solution.”

By then, the damage was done, however. A poll on Wednesday showed about 84% of French supported the yellow jacket movement, and 78% found Macron’s appeal unconvincing.

Yet the amorphous, leaderless nature of the movement could well spell its downfall. Its spokespeople are self-appointed, and as the protestors’ numbers have rocketed, they have begun to argue bitterly over strategy.

On Friday, Prime Minister Edouard Philippe invited the spokespeople to meet, in order to diffuse tensions. Valette, who had planned to go see Philippe after his lunch with TIME, decided at the last minute to boycott the meeting—as did almost all the movement’s spokespeople. “Why have a rendezvous with someone who won’t negotiate?” Valette said.

In the end, Jason Herbert, 26, met the Prime Minister with only one other person, a woman who chose to remain anonymous. Until Wednesday, Herbert was a named communications person for the movement. By Friday he said he was a “former” spokesman, perhaps for having dared to meet France’s head of government. Emerging from the palatial Prime Ministerial headquarters to a phalanx of TV cameras, he told journalists he did not speak for the movement, and that Philippe had promised that “the dialogue remains open.”

Valette predicts the movement could well “destroy itself” through internal discord over what issues to protest, how to do it, and whether the gilets jaunes should become a political party, as some of its spokespeople have suggested. “Winter is coming,” he said sadly. “It will be cold. People will not want to stand for hours on the street, and there will be fewer and fewer.”

That is a calculation Macron, a savvy economist, might well have made. 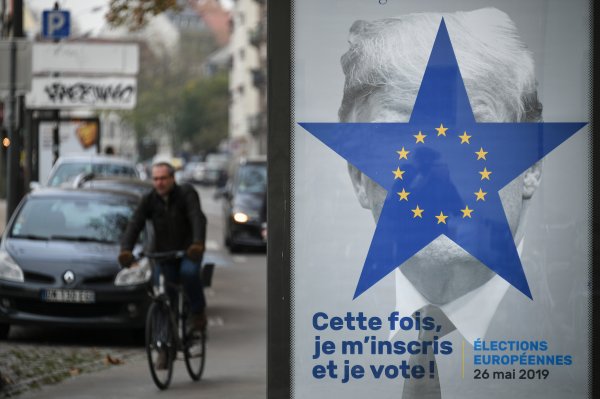 French Town Features Trump in Its Voter Registration Posters
Next Up: Editor's Pick