Stephen Colbert is kicking off the holiday season in what seems to be the only way he knows how these days — by taking some shots at President Donald Trump.

During Wednesday’s episode of The Late Show, the host welcomed viewers back following a Thanksgiving hiatus by performing a Trump-inspired cover of “Santa Claus Is Comin’ to Town.”

Colbert explained that the political carol, dubbed “Mueller Claus Is Comin’ to Town,” was intended to send a message to the President about what’s in store for him as special counsel Robert Mueller’s Russia investigation kicks into “high gear.”

“He sees you when you’re tweeting, he knows your hair is fake,” Colbert sang. “He knows when you’ve been bad or bad because you’re bad for goodness sake. You’re bad!” 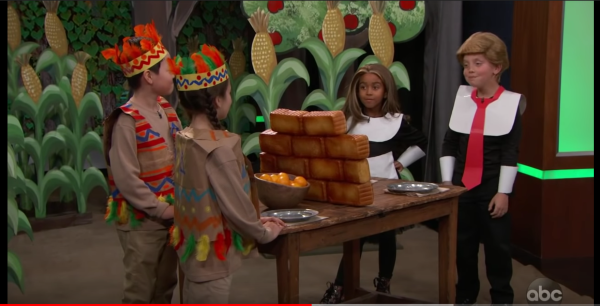 Jimmy Kimmel Had Fifth Graders Put On a 'Trumpsgiving' Play
Next Up: Editor's Pick